One of my favourite movies of 2012 is the criminally under-performing, modern-cult-classic, Dredd (which I will review as well when I get my Blu-Ray/DVD copy). I honestly didn’t have any interest in the 2000AD universe before I saw Dredd, but the film completely sold me on it (I’m currently eyeing some Block War minis and Dredd/Anderson omnibuses). However, after seeing it I knew I now had to see the original, oft-derided Stallone vehicle, Judge Dredd. Obviously I had heard the fan complaints (“he takes off his helmet? OMGWTF!?!”), but as an extremely casual fan of the universe I will review Judge Dredd with a bit less of a bias. Also, note that there are some spoilers in this review. 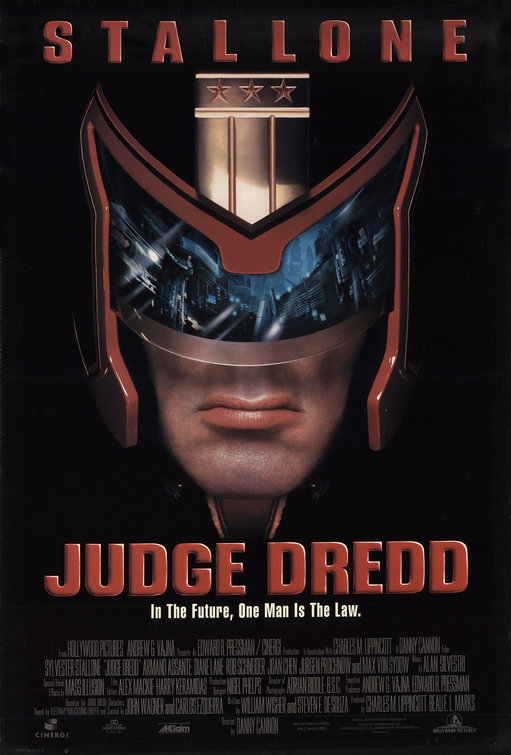 First off, despite its lack of authenticity in terms of character and tone, the Judge Dredd Megacity One strikes me as more faithful to the source material than the Dark Knight-esque, reality-grounded city that appears in Dredd. In fact, the first 5 minutes alone are dedicated to establishing the world, which was a great idea. That said, as an adaptation, the movie comes across exceptionally cheesy and tacky. I guess that’s a side-effect of the pre-Nolan era of comic book movies, but the sets and costumes all looks really plastic and are hard to take seriously in any way. The costumes are straight out of the comics, but just don’t make sense… the Judges are supposed to be fighting crime, so they choose to do so with a giant eagle on their shoulder and spandex? It may look cool in a comic, but this just doesn’t traslate well into movies at all. 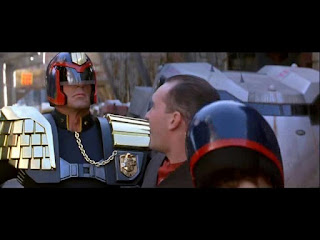 Another good thing I can say is that Stallone certainly looks the part of the gruff and grizzled Dredd… sure, as soon as he opens his mouth he isn’t exactly convincing, but in terms of physicality, he’s a good fit for the role. Of course, Stallone completely overwhelms the role, supplanting Dredd as a character and replacing him with your typical Stallone action-vehicle, but we’ll get into that soon. As for the other cast members, Armand Assante as Rico was very enjoyable as the hammy villain-type and seemed to be having a blast. Diane Lane was also serviceable as Judge Hershey. Rob Shneider’s Fergee is the one that is derided most though, and rightly so. He is one of the most absolutely useless characters I have ever seen in a movie, and it boggles my mind why they ever chose to include him in the film at all. He literally does nothing, and just serves as an irritating tag-along and mouth-piece… I guess he disables a robot near the end, but it’s not like Dredd couldn’t do that himself (and in much more spectacular fashion too). Shneider alone screws his movie A LOT.

The entire plot just becomes a way to service yet another Stallone actioner, and one of the cheesy 90s ones at that. It feels a lot like Demolition Man, and while a lot of people like that movie (I’m not among them), it’s not even as fun as that movie was. The plot’s pretty typical: Dredd, the upstanding lawbringer, is arrested for murder… and then proceeds to fight this charge with a hell of a lot more murder, resisting arrest, etc. Obviously, this is completely against character and unintentionally turns him into a massive hypocrite. If there were some sort of irony to this it would make more sense, but the film doesn’t suggest that at all. In fact, it serves to glorify the justice system, rather than satirize it like the comics do. The ending, where Dredd drives down the street with his motorcycle to the cheers of the assembled crowd was just too ridiculously/senselessly patriotic to fathom… also why does the base start to blow up at the end? Maybe I wasn’t paying attention, but it seems to me that it literally just self-destructed for no reason.

In all honesty, I’m making it sound like I hated Judge Dredd, but I didn’t really. I’ve seen way worse movies than this within the same week. In fact, it wasn’t bad for the first half of the film (in part because Rob Schneider was sidelined), but it was the second half where I really started to dislike it, and where the negative points I have mentioned creeped in. There were some good lines too, such as:
Fergee: 5 years? No! No! I had no choice! They were killing each other in there!
Judge Dredd: You could have gone out the window.
Fergee: 40 floors? It would have been suicide!
Judge Dredd: Maybe, but it’s legal.
However, these funny bits are juxtaposed with some absolutely abyssmal lines, which are further brought down by horrible delivery, such as:
Judge Dredd: There is a way in. 10 years ago, 2 refugees figured it out, through the city’s incinerator, there’s a flame burst twice a minute, that means they have only 30 seconds to run through before it flames again.
Seriously, who wrote that? Don’t tell me that was actually in the script? Was Stallone even awake when he said that? In any case, guess which half of the movie those 2 bits of script were from. Shouldn’t be too hard.

Bottom-line: Judge Dredd was just a bad movie, even for a casual movie-goer. For a full-blown Judge Dredd fan, it must have been torture. As far as cheesy actioners go, you could probably do worse, but if you’re that easy to please then you probably don’t even read reviews anyway.