I’ve been playing Battlefield 3 since release, and while I’m not amazing by any means (currently a 1.41 K/D ratio), I am consistently one of the top players in the server when I play. That said, I’ve seen some absolutely brutal players out there (who, more often than not, are rocking headsets and acting like they’re uber-l33t). With that in mind, here are 10 basic tips for people playing Battlefield 3 (although some are pretty general so you can apply these to any shooter/paintball/airsoft):

10) Flank
Is the enemy holed up in one area? Are you able to get around behind them? Watch this video and see the value of the opening this gives you:

A successful flank like the one above can disrupt or break an enemy’s defense line and allow your teammates to advance much easier. You might not survive, but you should bring down a few of them with you.

9) Know When to Fold ‘Em
In any shooter, when you’re facing off against an opponent it’s incredibly easy to get tunnel vision. You feel like you have to kill that guy, or die trying. However, if they have the upper-hand (you’re at >50% health, low on ammo, sniper vs shotgun, etc) and you have enough cover to make a safe getaway, it might be a good idea to get your ass out of there. After that, you can set up an ambush if they choose to pursue, get some reinforcements, or at the very least heal yourself. No sense in dying needlessly.

8) Use Cover
In the above point, I mentioned that you should only fall back if you have cover. The reasons for this should be obvious – cover keeps you alive. If you’re in cover and your opponent isn’t, you have a much smaller profile and are at a massive advantage. Inversely, if your opponent is using cover, then you can beat this in a couple different ways. Either flank them, flush them out with explosives or blow it up (if possible).

7) Stay Mobile
Another common-sense tip, but one that is woefully under-used in almost every shooter… the existence of the word “camper” pretty much attests to this. Admittedly, camping a section of the board can be a good idea, but if you’re doing it it should be to help the team. If you’re just running off, camping on top of a hill and then staring down your scope for 10 minutes, I can guarantee you I am going to come after you and rape your corpse. It’ll be much more infuriating if you kill a couple people in a 30 second period, and then move. If the enemy does not know where you are, then you have the advantage.

6) Spawn Intelligently
The first BF3-centric entry in this list. Yes, it really sucks spawning far away from the frontlines, but sometimes this is your only real option. If your allies are under fire, overextended, or just in trouble generally, it’s best just to spawn elsewhere. Otherwise you’re going to have to respawn in 15 seconds anyway. If you’re not sure how things are going to go down, then watch them on the spawn screen and wait for an opening.

5) Watch Your Mini-Map
Not sure where the enemy is? Check out your mini-map. If they fire their weapon, you should be moving to flank them ASAP. Especially if you’re a sniper, since the scope is cutting down your field of vision exponentially. Otherwise, this will happen (skip to 1:00):

Now this is a good idea if you don’t have a target already won’t work for all opponents, but you can get around it by putting a suppressor on your gun. Some people aren’t so worried about this, but I know that I always put a suppressor on my weapon.

4) Situational Awareness
This applies to infantry and other vehicles as well, but in this case, I’m going to refer to tanks in particular. Tanks rock in BF3, but they have some major vulnerabilities. Among these, C4 and anti-tank mines are probably the most common. Anti-tank mines are rarer than they were in Battlefield: Bad Company 2 but they can still wreck a tank in 1 shot. The easiest way to avoid these is to use your spot button to minesweep and/or keep an eye out for mines. Or just avoid well-traveled paths.
When I was a tank-noob, for every vehicle or javelin attack that took me out, there was at least 1 other time when I got attacked by someone with C4. As a result, it’s a bad idea to charge into confined areas – guys with C4 can hide in these areas easily and kill you before you even know there was someone there. You can counter this with a proximity scanner, but you’ll have to make sure you watch the mini-map frequently. However, I prefer Zoom Optics personally. Instead when I play tanks, I treat them like artillery: sit back, fire off the main gun and bombard the enemy from afar. Then, if the enemy could be hiding in the area where I advance, I switch to 3rd-person view frequently and keep an eye out. If they’re putting C4 on me, I jump out and shoot ’em up before they have a chance to react.
Bottom-line: don’t rush in, use third-person view, kill noobs. 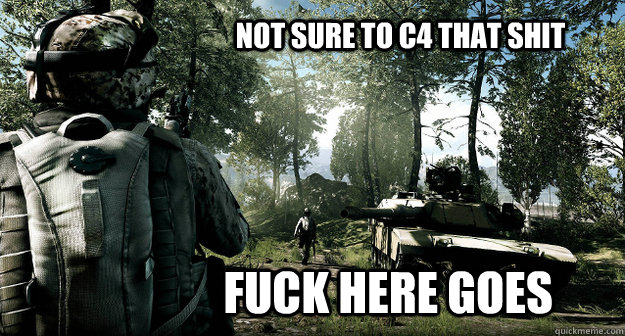 3) Use Your Class-Specific Equipment
Again, you’d think these would be obvious… but if I had a nickel for every useless medic or support class I’ve seen in a game I’d be a bloody millionaire. If you’re a medic, throw down health kits and revive people (don’t get yourself killed in the process though). If you’re a support gunner, throw down ammo kits (especially if someone’s yelling “I NEED SOME AMMO!!!!” at you). If you’re recon, throw down spawn points. If you’re an engineer, repair vehicles. Again, this should be obvious, but the sheer number of people who do dick-all to help out their team in this game are staggering…

2) Spot Enemies
Seriously, the Spot function should be second-nature as soon as you see an enemy. Hell, even if you don’t see an enemy, press the Spot button to see if there’s anyone there. Spot has gotten me so many kills that I’d be much worse at this game without it. Even if you don’t get the kill yourself, you’re basically designating that enemy for your entire team to bring their wrath down upon.

1) PTFO
This whole list was inspired by a recent game which illustrated this point very well. One of my squad-mates was on his headset and talking about how he was bored of defending the objective and wanted to charge the enemy head-on. Predictably, he died soon after, but the whole team started abandoning the objectives in favour of charging like morons. As a result, the enemy snuck past them and nearly took our objectives, if it wasn’t for the 2 of us that were still defending the base.
Battlefield is a largely objective-based game, and if you want to be a good teammate, then play the f-ing objective. This doesn’t mean you have to camp right on top of it, but remain in the general area where you can defend/attack the thing through covering fire, direct attacks, etc. If you’re dicking around in the middle of nowhere because you’re afraid of dying, you’re not helping anyone.
Also, in something like Team Deathmatch, your objective should be to maximize your K/D ratio. Generally, it’s a good idea to stick to the fringes of the map, or to places with wide lines of sight and good cover. Narrow corridors are generally where the action gets funneled, but these are death traps. Hopefully these tips help you out!