This shouldn’t really a big surprise, but I’m not a big fan of the Transformers film franchise. I was moderately familiar with the series before I saw the Michael Bay movies (mostly thanks to Beast Wars), so it’s not like I went into them with any ill will. I’m not looking back on the series in the post-RotF era – I honestly didn’t care much for the film series from the start. I mean, Transformers was a decent film, but nothing special (even if audiences and critics dubbed it the #1 blockbuster of 2007). Then Revenge of the Fallen came out and cemented the series as a cinematic travesty. Now with this in mind, it shouldn’t be a massive revelation I hadn’t bothered to go see Dark of the Moon until now. I had heard it was an improvement over the previous film, but I decided it was finally time to find out for myself. As usual, spoilers abound. So, right off the bat, we’re shown the film’s major positives – it features some jaw-dropping special effects and action on a massive scale (clearly that was the intention, to start the film on a high-note). Even though the battle on Cybertron is very short, the effects and action here are incredible. The opening also highlights something that I didn’t think I’d say – the film’s conspiracy-theorizing story is actually a very interesting opening to the film. The film would probably have been better if they had dispensed with the Cybertron opening and instead made the moon expedition more of a mystery to the viewer, but suffice to say that the film opens on a positive note. 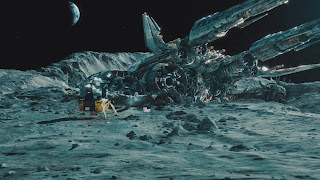 The effects and action are not limited to the opening either. You’d think this would be obvious, but I actually found the effects in Transformers and Revenge of the Fallen to be rather weak, mostly due to the fugly robot designs which made it nearly impossible to discern what was happening on-screen. Consequently, the action scenes were a mess – a problem compounded by the long stretches of half-baked plot between these parts. In Dark of the Moon however, I actually didn’t have any trouble with the designs making the clashes murky. While I still hate how the ugly Transformers have been designed, it’s less of an issue this time around.

And… uh… that’s all the good stuff I have to say about the movie. Really? I had more to praise in Judge Dredd than this… sheesh, well onto the first problem: plot. A lot of people (and Transformer fans in particular) will argue that plot doesn’t matter in a movie about robots fighting robots, but you’re just plain dead-wrong. Why settle for a piece of crap action movie when you could be watching something like Terminator 2 – a movie about robots fighting robots which also happens to have a great story (not to mention far superior action)? And, predictably, Dark of the Moon screws the pooch. The opening minutes of the film establish this: the half-destroyed Autobot ship somehow travels an unspecified number of light years to reach the Moon… how did this happen? Did it teleport? Did it have some sort of “hyper-drive” that somehow was set off and then transported it to the Moon? Was the Cybertron war taking place millions of years ago? Of course, no one really thinks its necessary to explain this, just leaving it up to editing to conveniently hand-wave it away: it happened, that’s all that matters. That wouldn’t be so bad if this sort of thing wasn’t a hallmark of the series – for example, the Autobots appear, disappear and get captured based on whether its convenient for the writer to keep them around, even if they weren’t in the area to begin with (eg, Optimus and Sentinel Prime are hanging out in the desert alone, and then suddenly are barreling down the freeway with the other Autobots with no explanation). In a particularly hilarious example of this, Optimus gets sidelined for much of the final battle because (and this is not a joke) he flew into a bunch of cables and had to get disentangled. Seriously. Similarly, the film doesn’t really seem to keep its fiction in mind. The whole evil plan is tenuous to begin with, but taken into account with the action of the previous 2 films, it makes no sense at all. Furthermore, Sentinel Prime states that the film’s MacGuffin, the teleporting pillar things, “Defies your [human] physics”… First off, did he mean our understanding of physics, because I’m pretty sure physics aren’t confined to Earth. Secondly, what does Sentinel know of the human understanding of physics? Did he attend an elementary school science class before heading back to NEST to meet with the CIA director? Admittedly, many of these quibbles are rather nit-picky, but they break the sense of immersion in the film’s story (or attempt at one), and they happen constantly. The next major issue with the film is the characters. I can’t think of many other series which feature so many genuinely infuriating characters. Foremost amongst these is Shia LaBeouf’s deservingly derided Sam Witwicky. I don’t have a huge problem with Shia as an movie star, but the Transformer movies have done him no favours. To make matters worse, Dark of the Moon is by far the worst performance I have seen of his. During the first half of the movie, Sam freaks out constantly and at damn-near everybody, coming across as nothing more than a whiny, entitled bitch. Thankfully, when the shit hits the fan, he finally nuts up and shuts up, but even then he isn’t exactly an endearing character – he’s just finally bearable. Furthermore, the authority figures are totally justified in saying that Sam is just a messenger (which is what made him all whiny in the first place): he isn’t qualified to risk his life with the Autobots at all, and the fact that he isn’t dead yet comes down to little more than sheer luck. 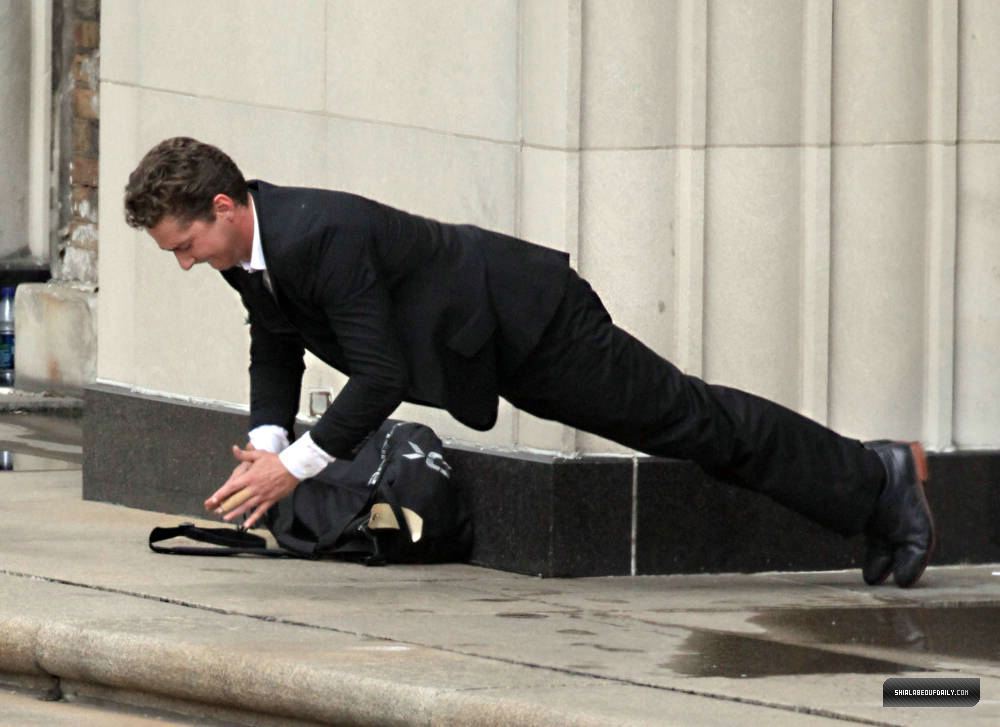 As for the other characters, they’re mostly just an annoyance more than anything else, or are just plain useless. Brains and Wheelie are literally useless and unfunny “comic relief” characters, Sam’s parents don’t do anything of value (and are as irritating as ever), Simmons is pointless and the new additions are either wasted or nothing of note. For example, John Malkovich’s character is utterly pointless and wasted, disappearing without having caused any sort of important impact on the plot. As for the Transformers themselves, they’re about the same as ever (although the stereotypically “Spanish” one made me cringe every time he spoke… which, thankfully, was less than you’d think), including excessive pop-culture references and terrible attempts at humour. 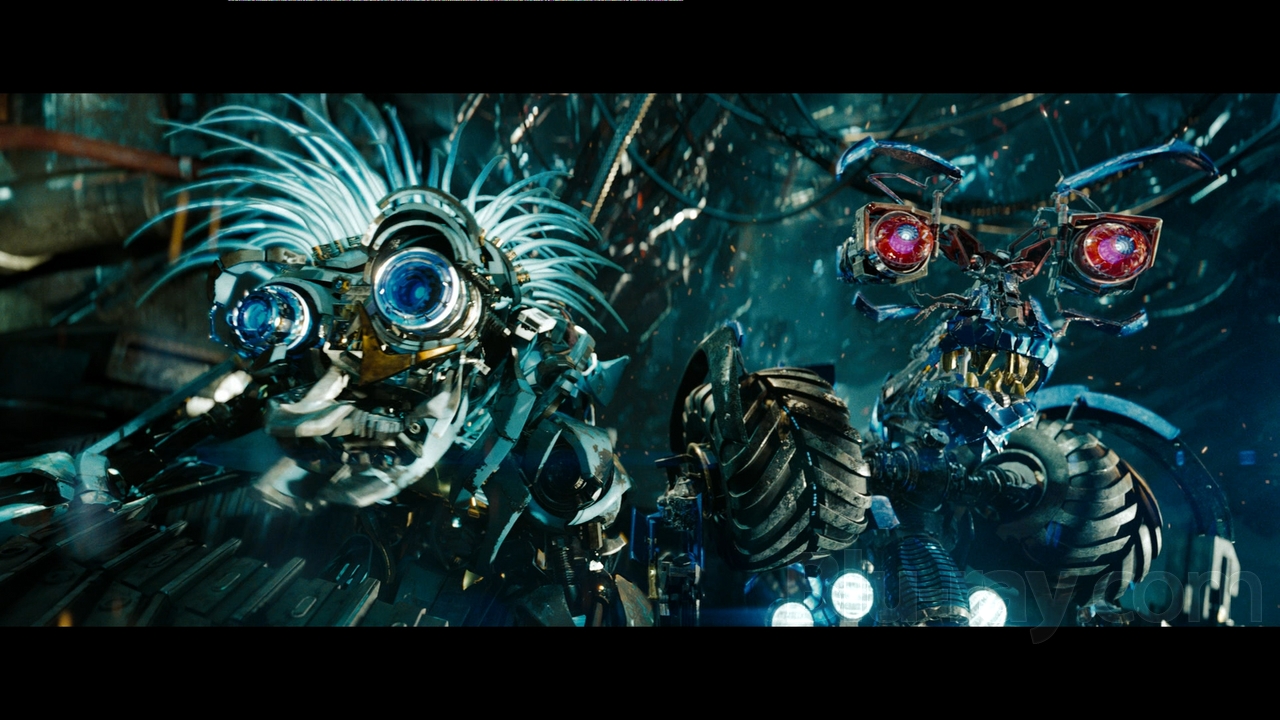 In all, the movie is just way too overindulgent (in more ways than one) and was in serious need of some finer editing. For starters, the movie was way too damn long, and would have fared much better if somebody had cut out the terrible attempts at humour, useless characters and pointless side-plots. Secondly, the movie itself promotes a sense of materialistic excess, reveling in ridiculously expensive cars, houses, etc. Finally, it sometimes just shifts tones in an ill-advised manner. For example, the piano ballad at the beginning of the invasion was very tonally “off”, and doesn’t really jive with the expressly mindless (and distinctly not serious) tone of the film itself. In addition, for a film marketed towards kids, the violence is pretty shocking: robots get torn apart, decapitated and evicerate (by the “good guys” no less), and that’s in addition to mass numbers of people being vapourized and killed on-screen (and having their skulls go flying out at one point) and the numerous counts of collateral damage (including some caused by the Autobots themselves). As an adult, I’m cool with this in my sorts of movies, but in a kid-oriented movie I don’t think I’d want to expose them to this sort of thing until they were closer to the PG-13 age bracket.

Bottom-line: Unless you’re already a fan, there is literally no reason to recommend Transformers: Dark of the Moon, other than the special effects and the last 40 minutes of non-stop action. Thank God Battleship crashed and burned, so we shouldn’t see as many summer blockbusters like this in the future.

Post-Script: I swear, I’m not just looking for movies to ravage on this blog, but it has just sort of been the trend. I’ll review Dredd next, then you’ll get to hear me gush.