Welcome back to the Planet of the Apes retrospective! In this entry we’re going to cover the third film in the franchise, Escape from the Planet of the Apes! Yes, that’s right, after doing everything in their power to kill the franchise for good in Beneath, the producers decreed that the series was destined to live on regardless. However with the future eliminated, the only avenue left was for them to explore was the past… 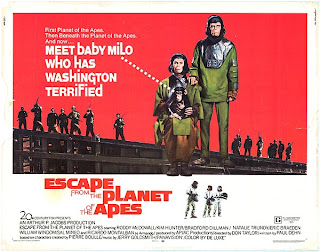 Kind of a lame poster, and don’t even get me started on the tagline… but still, it’s much better than the Polish version.

Despite the machinations of Charlton Heston and even the bloody studio head, work on a sequel to Beneath the Planet of the Apes started before that film was even completed. However, due to the obvious problem of having the entire planet destroyed at the end of the previous film, the producers had to pull a J.J. Abrams and work on a preboot/sequel. Once again, the budget for this sequel was cut back down to $2 million, meaning that the producers had to figure out how to cut costs. The solution to these issues was that film would plant the seeds of the ape revolution by propelling Cornelius, Zira and a third ape, Dr. Milo, back in time. Additionally, by setting it in the present day the crew were able to minimize the need for ape costumes.

The film was written by Paul Dehn once more with Pierre Boulle providing some advisement to incorporate satirical elements. Finally, Don Taylor, famous for such notable films as Father of the Bride and The Naked City, was brought on to direct. In terms of cast, Roddy McDowall and Kim Hunter were brought back to play Cornelius and Zira, respectively. Sal Mineo was also cast as a third ape, Dr. Milo, but he was so uncomfortable in his make-up that he gets killed off less than 5 minutes after his introduction. Also making a return was Natalie Trundy, who played a lead mutant in the previous film, this time playing one of the human doctors sympathetic to the apes’ cause. The other main leads were Bradford Dillman as Dr. Dixon and the villain, Eric Braeden as Dr. Hasslein (a character who had actually been mentioned in the previous two Apes films). Rounding out the cast is Ricardo Montalbán who plays Armando, a secondary character who owns a circus.

Looking at its production, it would be reasonable to expect Escape from the Planet of the Apes to be a bit of a mess – it’s clearly a very forced sequel (which is practically a remake of the first film), it has a lower budget than the previous two films, it doesn’t have a major star like Charlton Heston to lead it and it had a very rushed production (it was filmed in 6 weeks and released less than a year after Beneath)… however, it does have a good cast of old and new characters and has a great director at its helm. Were the cast and director able to overcome the very obvious and major hurdles presented to them and make Escape a worthy sequel to the Planet of the Apes? Well read on and find out…

Escape opens with the American military discovering that Taylor’s space craft has been found off the coast of Los Angeles. However, when they open it up they discover that the astronauts inside are actually three chimpanzees – Zira, Cornelius and Dr. Milo. It turns out that when the gorillas marched off to war in the previous film, Dr. Milo (supposedly the most intelligent chimpanzee in the ape colony) had discovered Taylor’s shuttle and salvaged it, allowing he, Zira and Cornelius to escape the planet just as it was destroyed by the Alpha Omega bomb. The shockwave of the explosion causes a wormhole to open which propels the apes back to the 70s. It’s a pretty tenuous set-up, but considering the circumstances that had to happen for the film to even work, it’s serviceable… but thankfully they don’t dwell on the point too much, because it’s frankly ridiculous. This point is also probably the biggest stumbling block that a viewer could face – if you can’t suspend their disbelief enough to allow this plot point to pass then it might completely ruin the film for you. 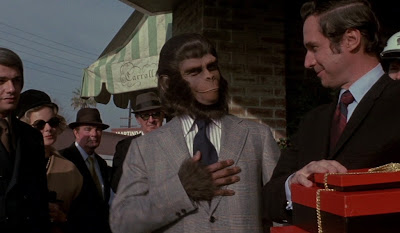 Anyway, Dr. Milo gets killed by a gorilla while awaiting examination, so Zira and Cornelius have to speak before a committee by themselves. They end up telling the world that apes are going to rule over humans in the future, but most people don’t seem all that bothered by this, turning the pair into celebrities. The only human who seems truly troubled by this revelation is Dr. Hasslein, the President’s science advisor, who believes that the presence of Cornelius and Zira is enough to expedite the ape revolution. His fears are further reinforced when it is discovered that Zira is pregnant.

As that short plot synopsis should convey, Escape from the Planet of the Apes actually has a pretty compelling narrative (if you can get over the wormhole contrivance anyway). Unlike Beneath, it’s very character-focused rather than action-driven and has some very clever twists and turns along the way. It even has a very dark twist ending which, while not as surprising as the original film’s shocking reveal, certainly lives up to the series’ legacy. The film also works in the series’ satirical hallmarks which were very inconsistent in the previous film. There’s obvious fish-out-of-water stuff (Zira getting drunk for the first time), but there’s also clever stuff like Cornelius watching boxing and getting turned off by the brutality, the notion that humans love their pet more than other humans (and can’t live without them), jabs at celebrity culture and a priest freaking out about the notion that two apes could be married. In addition to the satirical elements, philosophical questions about time travel have also been added in, courtesy of Dr. Hasslein. Questions of choice and predestination are brought up, because Hasslein believes that the future is a multitude of potential futures, but the ending of the film calls this into question. Hasslein also struggles with the philosophical conundrum of murdering a future threat – is it justified to prevent future atrocities by killing an unborn child? It’s questions like this that make Hasslein a great villain in this film: he’s extremely intelligent, but conflicted, sympathetic and morally ambiguous. He’s truly the film’s villain, but he’s trying to ensure the survival of humanity in the face of future destruction, much like Dr. Zaius in the first film. 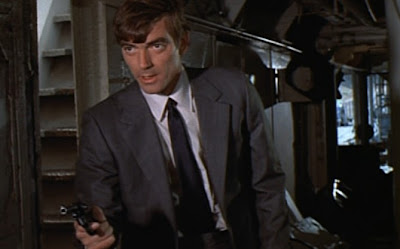 He also definitely rocks that suit.

As for the rest of the cast, Roddy McDowall and Kim Hunter continue to shine as Cornelius and Zira, respectively. In fact, with the increased screen-time afforded by becoming the leads, Escape is probably the finest showcase of Zira and Cornelius’ characters in the whole franchise. The pair are extremely sympathetic, but the darker side of the apes is really highlighted – Zira in particular, who we have been very drawn to for the past three films, is a great character but one who is voluntarily involved in experimental surgery on live human beings. This is something which had been acknowledged in the original Planet of the Apes, but the implications of her actions never really dawn on viewers until this particular entry. Ricardo Montalbán’s Armando also has a relatively small part, but it is very memorable due to the passion in which he plays the role. Unfortunately the two other leads aren’t so great. Bradford Dillman’s Dr. Dixon is alright, but he isn’t given a lot to work with considering that he’s supposed to be the human hero of the film. Likewise, Natalie Trundy’s Dr. Branton isn’t given much to work with either, but Trundy butchers her lines all the same. Her acting is particularly wooden… I’m almost tempted to compare her to Romy Windsor who, if you read my Howling IV retrospective, you may remember as being one of the worst actresses I’ve ever seen. Trundy’s that bad in this, but thankfully her lines are extremely cut-down.

That said, Escape has its fair share of problems. For one thing, the soundtrack is noticeably worse than in the previous two films. It sounds very generic, almost like a 70s cop movie. I think the intention was to create a different sound-scape since it is set 2000 years before the previous films, but comes across as clearly inferior and much less evocative (barring perhaps the finale aboard the derelict ship). There’s also plot holes introduced in the script, such as Cornelius and Zira’s story about the rise of the apes – they claim to know that the apes rose against the humans and took over, but this contradicts the stories of the sacred scrolls in the original Apes film, which claimed that apes had always been dominant over man. With a bit of work this could have been integrated better, but as it is it’s a massive plot hole (or, at the very least, a major retcon). Then there’s smaller issues, such as the embarrassingly horrible-looking gorilla, which is clearly a man in a bad suit… made all the worse because he’s the one who strangles Dr. Milo to death, so it’s not exactly a background detail. For a series which prides itself on fantastic make-up effects and costumes, this is one embarrassing blemish which is hard to let slide and I can only imagine is to blame on the reduced budget. Another problem is the fact that Zira and Cornelius escape the military base because there is absolutely no one guarding the two apes, which is a pretty ridiculous plot contrivance (one which still crops up today). Finally, a pregnant Zira drinks even though she knows she’s pregnant. I guess that Fetal Alcohol Syndrome had not been discovered yet, but for a modern audience this is a pretty terrible detail which derails the film for a moment or two.

However, all-in-all, Escape from the Planet of the Apes is a pretty damn solid film overall. In fact, it has a 78% on Rotten Tomatoes, the highest score of any Apes sequel in the original series. It has its problems, but most of the are relatively minor. However, like I said earlier, if you can’t get over the circumstances of the apes’ time travel then your chances of enjoying it are going to drop dramatically. Escape from the Planet of the Apes is a sequel which should have failed miserably but ends up being a great watch and a very worthy film to carry on the legacy of the Apes franchise.

Be sure to come back soon for part 4 of this retrospective series, Conquest of the Planet of the Apes!