Despite a very mixed reception, The Butterfly Effect made enough money for New Line Cinema to warrant a sequel. Could it fix the issues with the original, or was it doomed to straight-to-DVD hell? Read on to find out… 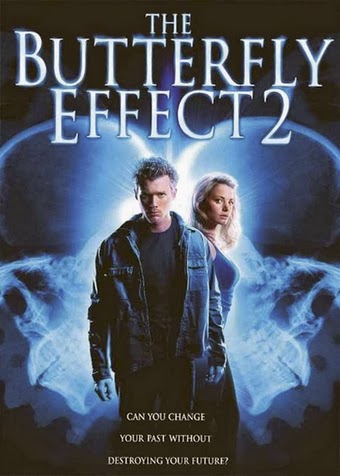 Kind of a lazy design, it’s basically the exact same poster as the original film…

While The Butterfly Effect made New Line a solid profit, its very mixed reaction made a sequel a bit of a risky proposition. As a result, while a sequel was quickly greenlit, the production budget was slashed in half and the film ended up going straight-to-DVD. To be honest, I’m having trouble finding out if the film was always planned as a straight-to-DVD feature or if it ended up that way due to a lack of confidence over the production, but in any case it’s not a great sign of the sequel’s quality. In any case, original writer-directors Eric Bress and J. Mackye Gruber did not return to write the script or direct.

The film was directed by John R. Leonetti, better known as a horror movie cinematographer/director of photography rather than a director in his own right. The script was written by Michael D. Weiss, whose CV includes such notable films as… uh… I’ll Always Know What You Did Last Summer, Hostel: Part III and Journey to the Center of the Earth 3D. Ouch, when a Brendan Fraser kids movie’s the highlight of your resume, you know something’s wrong. As for the cast, the film stars a bunch of nobodies: Eric Lively (who has really only been in unnotable roles for his whole career) plays the lead character, Nick. Dustin Milligan (male lead of… Shark Night 3D) plays Trevor, Nick’s best friend. His girlfriend Amanda is played by Gina Holden (known for minor roles in Saw 3D, in which I remember her dying an infuriatingly unjustified death, and Final Destionation 3). The only “big name” in the film is Erica Durance, famous for TV series Smallville and Saving Hope, who plays Nick’s girlfriend Julie. 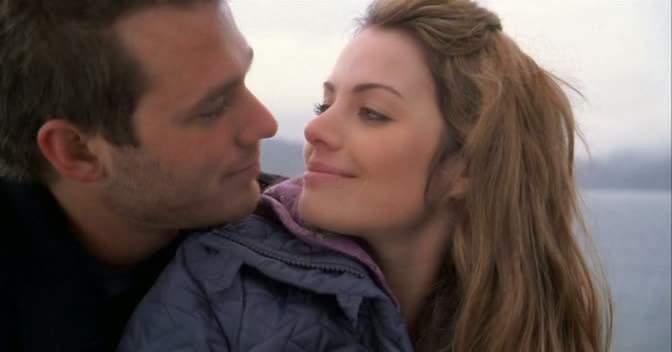 The plot follows Nick, a sales representative at a tech start-up. After his girlfriend and best friends are killed in a car accident, in which he was the sole survivor, he discovers he has the ability to time travel to fix his life. However, as he changes things to try to get himself ahead, he soon discovers that altering the past can lead to unexpected consequences in the future… As you can probably tell by that short synopsis, The Butterfly Effect 2 is basically a “rehash-sequel” along the lines of Howling IV. The script is a hell of a lot less daring and complicated than the original film. In a lot of ways, it feels like Michael D. Weiss was trying to fix some of the criticisms of the original film. One of the ways this is done is by making the plot far simpler. For example, the blackouts have been removed from the equation entirely, the time travel sequences only stretch back a year and the number of time travel instances has been cut back significantly. As a result, The Butterfly Effect 2 boasts far less plot holes and logical inconsistencies than the original film, although more time travel couldn’t have hurt. Weiss also cuts out much of the extremely dark content which defined the original (the darkest thing in this is a really awkward man-rape, but it’s played for laughs). However, this change is less-positive, since instead of interesting, psychotic leads we get whiny, pretty-faced douche bags. Ultimately, this just makes the sequel’s content far more boring.

While the film doesn’t have as many logical issues as the original, the script still has some strange issues. For example, there’s no real setup for Nick’s time travel abilities. His mother says that he has always had nightmares and headaches, and it’s sort of implied that post-traumatic stress disorder unlocks the ability to time travel. However, it’s not really explained at all how he unlocks his abilities, or how he manages to function when just looking at photos gives him debilitating headaches. The film also works a mention of Jason Treborn into the plot just to link it to the original movie, but that just makes the mechanics of time travel more confusing… how many people are out there that can change the past? 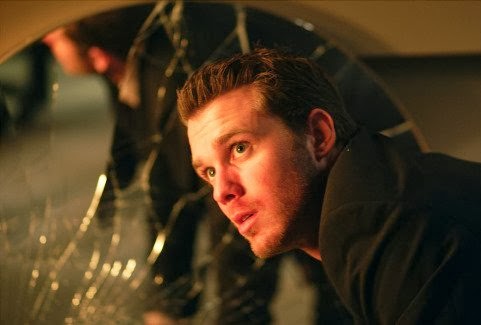 The characters are also very uninteresting. No one puts in a particularly great performance, although they don’t really have much material to work with. Compared to Evan Treborn, Nick just comes across as a dick. Rather than using time travel to help his friends, he uses it as a self-serving tool to get ahead. He embarrasses his boss, steals his promotion and makes himself rich as a form of revenge… and then continues to treat his (now innocent) former boss like shit after he does all this. Not only that, but he inadvertently screws over his company in the process, taking it from a successful start up to a company hemorrhaging money and in debt to the mob. The other characters aren’t much better – Julie is the generic girlfriend, Trevor’s the annoying best friend and Amanda has so little screentime that I can’t even tell you what she was like. Like Evan, Nick also has a whiney mother, but she’s basically useless to the plot, existing only to tell us that Nick’s father was crazy too… a plot point which really only exists to rehash the original film’s family dynamics. Oh, and I’d be remiss to neglect to mention that totally random and offensive gay gangster, Wayne. He barely has any screen time, but he is such a ridiculous addition to the plot that he’s memorable (and yes, he has the stereotypical gay voice). This is mostly due to the aforementioned man-rape scene where Nick wakes up getting blown off by somebody. He thinks it’s his girlfriend, but then suddenly Wayne pops out of the covers and everyone in the universe yells “WTF?!?!” simultaneously. It’s such a random and pointless scene that it’s almost funny. 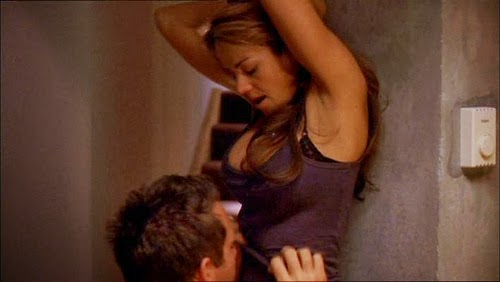 Of course, the budget also shows itself elsewhere. The opening titles and title card are pathetically tacky, like something you’d expect to see in a student horror film. In general, the film just looks cheaply filmed, in spite of Leonetti’s cinematographer experience. The editing is also very bad at times – I noticed that the blood makeup would very noticeably change at times and that even one of the pictures that Nick looks at changes between shots. 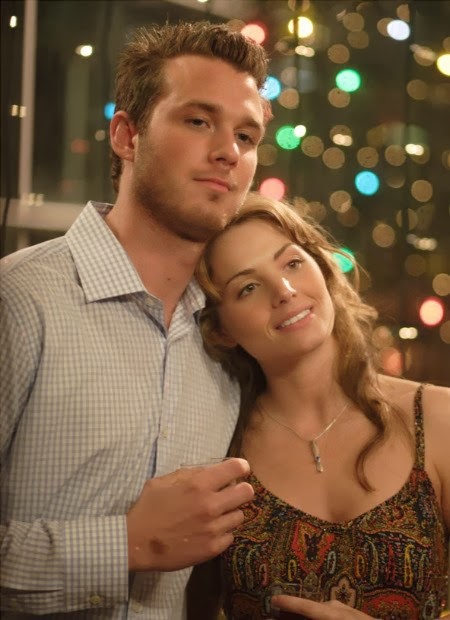 It also seems that a lot of content ended up getting cut out of the film. At one point, Nick whines that everything he does just makes things worse… which doesn’t make a lot of sense, because he has only time traveled twice and all the bad stuff only happened because of one change (which only attempted to “fix” one thing). I really wonder if they had more time travel sequences planned and/or written, but weren’t given the budget to implement them. It’s also possible that they had filmed much of the movie, but then ran out of budget and had to rush the last act as a result.

Oh and speaking of the ending, it’s an absolute embarrassment. It makes no sense and is not set up at all. To set the scene, Nick travels back to just before the car accident to try to save his friends. He tells Julie that he’s breaking up with her (which doesn’t make a lot of sense in itself, he’s only time traveled twice and hasn’t exactly exhausted his options enough to require self-sacrifice), which causes Julie to rush off in her car. Nick chases after her to save her from crashing and dying (even though the accident can’t even happen now as per the butterfly effect itself), and succeeds… however, in doing so, he ends up in oncoming traffic and decides to sacrifice himself to save her by driving off a cliff. What the hell!?!???!?! Why did Nick commit vehicular suicide? He barely even bothered to change his past, suicide wasn’t even a justified option to save anybody, unlike Evan in The Butterfly Effect director’s cut, where he had exhausted all other possibilities. It’s like they wanted to force in a twist/Christ-like ending, but did so without logic. As a result, we get an incredibly unsatisfying non-sequitur ending of epic proportions. Of course, that’s not the end, because Julie gives birth to a son who shares Nick’s time travel abilities. Oh no! Time travel baby! The cycle continues!

All in all, the movie just isn’t very interesting. It’s basically just a cheap, sanitized version of the original, which is about the worst thing you can say about a sequel – why bother with it when there’s a superior version out there? The Butterfly Effect 2 is just mediocre, although the stupid ending makes it hard to recommend, even as a curiosity.

Be sure to come back soon for the third, and final, part of this retrospective series, The Butterfly Effect 3: Revelations!

*Coincidentally, Holden and Milligan both appeared in Final Destination 3… that franchise always seems to be an anchor for the Retrospective series!