These are truly abundant times for us amateur political bloggers. Case in point: this article was originally conceived from Trump’s reaction to the recent mass shooting in Orlando. I was skimming the news when I came across a very fitting quote regarding the situation that the US faces in the current election: “What Obama can’t say is [that] the presumptive Republican nominee is an embarrassment to his own party, and the ultimate IQ test for the American electorate, come November.” That alone was enough to trigger another round of speculation on the eligibility of the existing electorate… but then Brexit happened. Holy shit, if there was ever a time to make voter restrictions a public topic, this is the time.

Commenter #1: Maybe if there’s segregation/zero integration, but by the second generation I think you’d see a high percentage of immigrant children assimilating into our culture.
Commenter #2: Good thing we came in and civilized the shit out of them!

In general, I don’t believe that we should place important decisions in the hands of the uninformed (or misinformed) public, and Brexit was a clear example of how this can go spectacularly wrong. With the British pound being devalued to historic lows, the elderly swinging the vote in favour of their rose-tinted childhoods, and the realization that this referendum is not exactly going to bring about any immediate net gains (if any), it’s little wonder that many “Leave” voters have changed sides and admitted they didn’t know what they were voting for. In fact, a good portion of the “Leave” vote was just trying to “stick it to the man” rather than actually thinking about the impact that this will have on them – after all, they might be trying to screw over the “elites”, but they’ll weather any economic uncertainty far better than the average citizens who end up suffering from a devalued currency, shrinking job market and the scores of other issues that Brexit is going to bring about. It was also worth noting that “the Leave camp won support across a diverse subsection of voters, both politically and economically. The clearest factor seemed to be education: those with a university degree voted overwhelmingly to remain, while those without one did the opposite, according to the Guardian newspaper.” 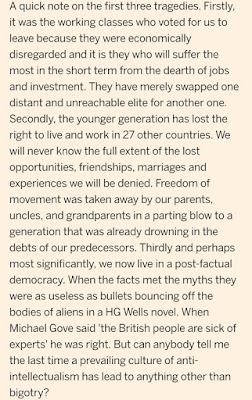 Of course, should we even be putting this sort of important decision in the hands of anyone with a half-formed opinion? The “Leave” painted their side as some sort of pro-labourer position… somehow… even though the “evil elitists” were warning that the economic repercussions of a “Leave” win would put workers in a worse position. The “Leave” vote was also noted for emphasizing emotion (calls for “freedom” and revenge against “elitists”) while the “Stay” vote emphasized rationality and expert opinions. Such rhetoric is just another demonstration of “playing politics” to earn votes, the truth be damned. As I have written previously:

“politicians lie or, if we’re being super generous, stretch the truth because it has been proven that the system benefits the ones who do so. This isn’t how it has to be though. Politics are a system which we created and which we can reshape. Start rewarding politicians with real integrity, who treat you like an intelligent individual and not just some statistic on their voter demographics spectrum” 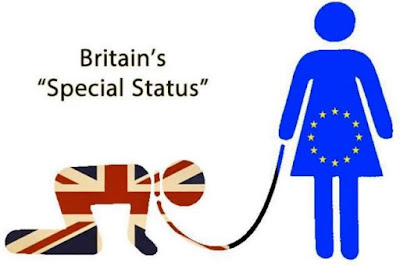 Something tells me that this meme was made by a misogynist who likes to say “cuck”. I’ll be honest though, it made me laugh.

This more or less gets to the crux of my worries about voter ignorance – should we allow just anyone to make important decisions, or should we allow those who actually understand what the hell they’re doing to make the call (depending on the complexity of the issue, ranging from demonstrably informed voters to certified experts)? For an analogy, I’d ask you to look to the trial by jury in the modern legal system. There are some questions on whether trial by jury is an effective method by which to determine guilt – from their personal biases, to their actual engagement, to their understanding of the law (although, to be fair, this is just one perspective and some studies find that juries do a decent job overall). It has been suggested that a more effective method would be to establish “professional juries” who actually understand the legal system and can be better-engaged in their responsibilities to provide (theoretically) more accurate results than a regular jury of peers could do. As far as I’m concerned, why not extend this idea towards voting as well, where those who are more qualified to make important decisions would be given the task? This would, ideally, turn politics into an actual, honest-to-goodness, debate instead of the emotional shit-slinging, rhetorical flourishes and misinformation that our current system relies on to swing votes.

That’s not to say that the general public should never have a say in anything. We live in an exciting age where a democratic government finally can and should be able to extend to the fingertips of every citizen in some form or another. I have an exciting, pie-in-the-sky picture of a future society where all citizens of a nation have their own government account, where they can engage in votes put up by lawmakers and can more-directly influence the decisions that affect the nation. At present, referendums are generally reserved for major policy shifts that affect all citizens, but my vision of a central, citizenship-based website would make such “small-scale” referendums much more feasible. The “O Canada” lyrics change, for example, was a prime example of the sort of purely opinion-based issue which should have been left up to Canadian citizens to decide rather than lawmakers, especially since it is in regards to a national symbol owned by all Canadians. 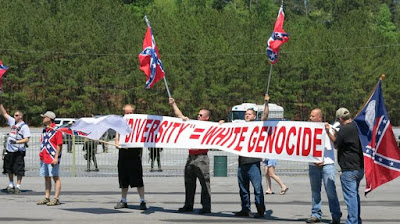 In addition to the obvious issues that come about when considering restricted voter eligibility which I covered in part 1, there is one other potentially critical issue I have begun to realize (and one which makes this already potentially-evil idea even shadier) – how do you prevent voter restrictions from turning into a revolutionary powderkeg? Terrorism grows from a sense of powerlessness, and if we suddenly tell an already-disenfranchised section of the population that their voices don’t even matter then they’ll start pulling off some ISIS-level shit to grab for power. Similarly to most of the really big issues with this whole idea, I don’t really have an effective answer on how to combat this potential drawback. Where do we even draw the line on what sort of issues are unacceptable without causing the ornery in society from flocking to it? Is “false freedom” necessary though to keep nutcases from feeling downtrodden and fighting back? Such a line of thought is incredibly unsettling… but then again, when we have a presidential candidate whose campaign seems to be basically designed around rallying white supremacists, it becomes easier to swallow.

We seem to be living in a time period where anti-establishment, counter-cultural movements are gaining a lot of traction in society. This is arguably most visibly demonstrated by the popularity of both Donald Trump and Bernie Sanders during this election cycle, and the immediate fallout from Brexit has shown exactly what sort of chaotic effects such a position can have. Such movements tend to stem from emotional lashing out when a level head might provide us with a better way forward. In such times, I wish that more of us would listen to experts and get educated on the issues rather than just going with our guts or our friends’ opinions. I might never “figure out” how to make voter restriction into a working system without turning the nation into a pseudo-dictatorship in the process, but I do believe that the current system is horrifically broken and I have no faith in it.