My good friend over at The M recently called me up and said that we had to see a movie he had just bought called The Postman. He just told me that it was a post-apocalyptic film, it starred Kevin Costner and that it would probably suck. With little else to go on, I decided to take him up on the offer and see how it went… little did I know I was heading into a multiple-Razzie winner. Read on for my thoughts… 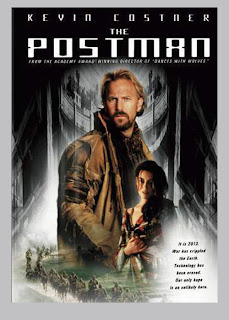 Something that becomes very apparent about The Postman quite quickly is that its editing is a bit of a jumble. Early on there’s a scene of the Postman in a ransacked store, and then suddenly he’s in a town performing Shakespeare for kids. I thought “oh, this must be a pre-apocalypse flashback” since he’d had a couple quick flashbacks already… but no, a couple minutes later the party gets interrupted by a bunch of raiders and it becomes clear that this is in the present. Well then, that raises more questions… like where did his gun go? How did he find the town? Honestly, moments like this happen throughout the entire movie. 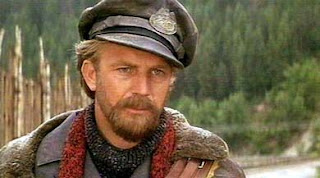 Even worse, the entire opening 50 minutes of the film are completely unnecessary. The film seems to be setting up something important, but it literally all gets thrown away all of a sudden… even all the secondary characters and one of the villains get killed too. To make matters worse, this ruins any sort of mystery that they could have derived from the premise. How much more interesting would it be if we were wondering if The Postman was telling the truth or not? If they played with our own sense of optimism for the reestablished US Government then it would be far more interesting than a completely unnecessary opening act that spells out everything for us.

My main issue with the opening however, is that it adds 50 minutes to an already overlong film. People bitch that The Hobbit is overlong. While they are right about that it doesn’t feel unnecessarily so (well, most of the time anyway). However, The Postman has no excuse to be a 3 hour “epic” whatsoever, and could do with some serious trimming of the fat. As it is, the film is excessive, bloated and boring half the time – cutting out the opening would have made it a hell of a lot more bearable.

In terms of acting, none of the leads are particularly awful. Most of the characters are serviceable, it’s only the younger actors which dip into sub-par level. The only one I found that really stood out was Will Patton’s Bethlehem, the charmingly psychotic villain. It’s always fun when he’s around and he really chews up the screen, sort of like an evil Chuck Norris. 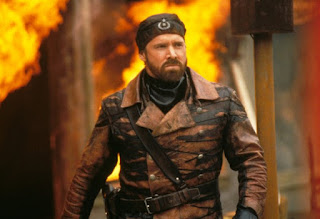 The plot is… strenuous. Here’s the premise of the film: society has collapsed because of some sort of apocalyptic event and most of the towns in Oregon have become subdued under the heel of the Khan-esque General Bethlehem. In the middle of this, a deserter from the clan cons people into giving him food and shelter by claiming to be a member of the reconstituted US postal service, acting on behalf of the new President. As a result, he (and the new postal service) inspires people to rise up against the clan and TAKE. BACK. THEIR. FREEDOMMMMMMM!!! If that sounds a little far-fetched, then you don’t know the half of it. The film has, quite simply, a pretty ridiculous plot which is way too strung out. It also has an air of pretension that it frankly does not earn. Say what you will about The Tree of Life, but it is deservingly pretentious. This movie is more like Rubber, in that it’s trying to look smart, but is probably stupider than most of the people in the room.

On a related note, I expected the film to basically be a distillation of this song from Team America, but luckily it avoided that… except when it didn’t. Confused? Well what I mean is that the film largely avoids being American propaganda, but occasionally it will suddenly pull out an “America: F–K YEAH!” moment out of nowhere. This generally happens when the Postman arrives in a town and causes the citizens to feel hope that the clan won’t be ruling much longer. This inevitably causes them to stand up to the clan soldiers and basically flip them off… FOR AMERICA. I’m pretty sure that this is supposed to make us feel proud to be American, but it just made me think “You people are idiots“. Seriously, if these people understood the notion of subtlety, then an entire town wouldn’t have been killed. America, you can be proud of your country, but be smart about it. Maybe consider assassinating the leaders of the clan when they come into town next time, rather than tell them they’re not gonna boss you around anymore when you have literally nothing to back up that statement. Honestly, the “patriotism” in this movie results in a lot of civilians getting killed due to sheer idiocy (doubly-so on the part of Ford Lincoln Mercury, who’s basically a budding terrorist cell leader). Don’t be kind of like one of these dumbasses. 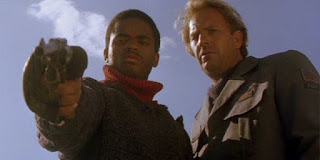 Is there anything good I can say about The Postman? Well to be honest, yes I can. The best thing I can say is that there’s some great production values – there’s basically no CGI that I could see, and the sheer number of extras that appear in some shots are unbelievable. Some of the sets are absolutely massive as well, I have a tough time believing that these were just miniatures – I think they were the real deal. Also, despite all the harping I’ve done on the story, I eventually found myself genuinely interested to see where things were going to go. I honestly believe there is a good movie hidden inside of The Postman somewhere, but it’s buried beneath shoddy editing, a weak story and excessive self-indulgence which basically make it a slog to sit through.

All-in-all, The Postman is an extremely flawed film. It’s bad, but not in a “so bad it’s good” manner. It’s just not the sort of movie I could recommend that someone sit down and watch for any good reason.