Hey, it’s been a while since I did a non-movie related post so I figured it was about time for a bit of personal commentary. I’ve actually got a few random things to comment on which occurred part-way through the retrospectives series, but I didn’t want to interrupt the series for them. Hopefully you find them interesting.

First of all, during the Final Destination retrospective, I was checking some of the sites which have apparently been driving pageviews here. I’m really popular with German Google for whatever reason. One refferant in particular seemed very strange since it was a file sharing site with no actual link to I Choose to Stand (from here on out, I pronounce IC2S the official abbreviation). However, some of the “most popular” searches on the site caught my eye: check ’em out. 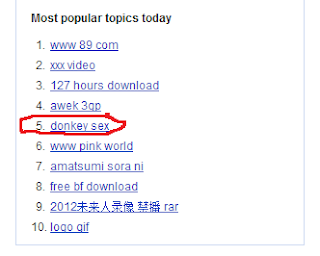 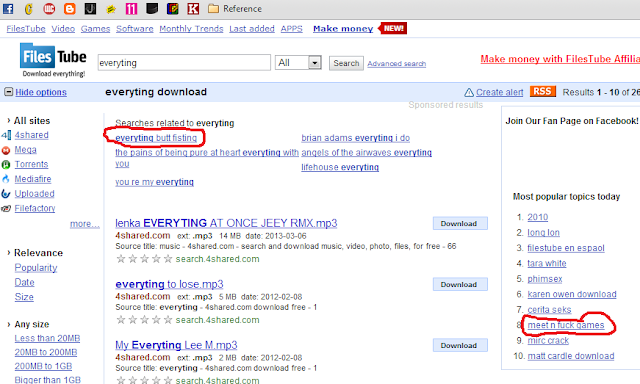 So, umm… yeah. Totally random. The Internet is a dark place. A very funny, dark place.

On a related note, I’ve recently gotten a pageview EXPLOSION. Normally I average 25-50 pageviews per day, but over the last couple days I’ve been suddenly getting 125+ pageviews. I’m not entirely sure why, but I get the feeling it’s because of my Hulk review. The Hulk review has always been my most-viewed post, it has almost 800 views right now, almost double my next most-popular post (and around 100x more views than most of my posts). I think that the cause of this Hulk exposure is because of Google Images. Recently, IC2S has been anywhere from the #1 to the #3 image when searching for “Hulk Movie 2003”. Hardly an uncommon string of words, so that’s very impressive (and unexpected!):

Hmm… maybe I’ll have to do a review of The Incredible Hulk soon… It seems that movie reviews are basically all that’s giving me exposure, so a bit more focus on that area is probably a good idea. I might spam IMDb with some links to my reviews too.

And speaking of IMDb, next thing of note is a really stupid (and therefore hilarious) post I read on the message board for The Ruins. Check it out here for a good laugh. If you didn’t bother to, then I’ll summarize really quickly: in the unrated cut of The Ruins, one of the characters randomly gives her boyfriend a handjob, to which the first poster asked why she’d do that to him without any lubrication. Then the very first commenter launches into a tirade about circumcision, and it all goes downhill from there as people start quoting totally biased sources… if they even quote sources at all, that is. Most of them just said you were a horrible girlfriend if you preferred mutilated male genitals, and that if male circumcision is fine then we might as well circumcise all the women as well. The degree of ignorance and stupidity in the thread made me laugh for a good ten minutes as I read the comments.

In response to all that silliness, I have a few things to say. First, studies have pretty conclusively shown that circumcision is not bad. However, it’s not vastly superior to non-circumcision either. People throwing around a stat that it does such-and-such are ignoring the big picture, because circumcision and non-circumcision both have their benefits and drawbacks. I read a very interesting article about it, I recommend checking it out. Second, people turn it into a human rights issue. “Let the baby decide!” they’ll argue, which, of course, is just a rhetorical flourish. Prior to the message board posting, I had seen anti-circumcision propaganda thrown about on Facebook which said similar things (I have strange friends-of-friends). To this, I say that babies and children are the wards of their parents, and circumcising a baby is far preferable and easier than doing it later when they’re actually going to remember it. Furthermore, there is evidence which points to circumcision helping to reduce HIV rates, and considering that the spread of HIV actually is a human rights issue, I think they cancel each other out at the very least. Third, male circumcision is in no way comparable to female circumcision. There’s a reason why the World Health Organization has officially dubbed the practice as female genital mutilation – it’s rather perverse. Like I have said, circumcision has health benefits beyond its cultural significance, whereas female circumcision largely takes away a woman’s ability to enjoy sex. As far as I’m concerned, that’s just wrong. If someone wants to decry a practice as barbaric, they should focus on female genital mutilation first and foremost.

On a somewhat related note, I don’t exactly support abortion on a moral level (and had some difficulty keeping it out of the “let the baby choose!” argument), but at the same time, as a male I do not believe I should dictate what a woman may do with/to her body. Oddly enough, it seems to me like the majority of anti-circumcision proponents I’ve seen are female… just an observation and might not even be true of the greater population, but I just wanted to throw that out there. Wow, I didn’t expect to write 3 paragraphs on sticking knives near penises and vaginas. I hope that was more comfortable for you than it was for me. 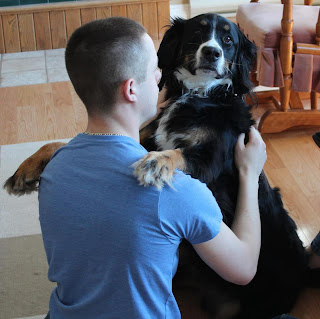 To bring back the happy thoughts, here’s a picture of my dog. Awwwwwww.

Next, I want to advertise a movement I’ve recently joined on Facebook. Yes, the humanitarian effort I’ve aligned myself with is… a call to make a Dredd sequel. Ok, maybe it’s not that important in the grand scheme of things, but if you’ve read by review of the movie, you’ll know that I loved it. In an age where the shoddiest movie can get a sequel if it made somebody rich, a truly deserving effort shouldn’t be left out. I sincerely doubt that the Facebook group will have any effect, but I’m willing to do whatever I can to see Karl Urban and company come back for a Dredd sequel.

Finally, I was originally going to end this post with the previous paragraph, but a friend of mine on Facebook drew me to this article about a war simulation between Iran and Israel. Suffice to say, it was chilling. I really recommend reading it, it is quite frightening in its realism and intensity.

Anyway, that’s it for this post. Be sure to come back soon – I recently saw a movie that I absolutely hated (yes, more than Noobz) and am looking forward to tearing it apart with brutal glee.