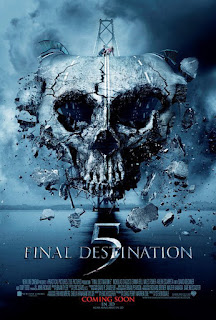 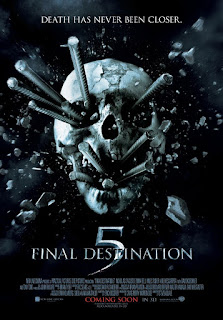 Once again, before I go any further, I just have to mention that Final Destination 5 had some great promotional posters. I guess I’m a bit of a sucker for a great poster, but the art team really outdid themselves with this one. Some of them are just painful to look at (in a good way), but really capture the morbid spirit of the series quite well… in fact, the one with the rebars was so effective that it ended up getting banned by the Advertising Standards Authority in the UK… unwarranted in my opinion, but if they thought that was bad, then I would just hope they haven’t seen the DVD cover for Severance… 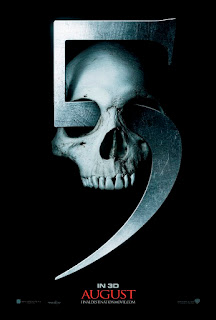 Anyway, after the shit-show that was The Final Destination (one which I enjoyed somewhat, but guiltily), it looked like the series was going to die… until the studio execs saw the box office numbers coming in. The damn movie made $186 million worldwide. Despite the big “THE” in its title, the producers decided that it was more of a suggestion than commitment and so set about working on a 5th entry in the franchise. However, thankfully, they knew they’d screwed up with The Final Destination and wanted to set things right. They claimed that they wanted to make the movie more suspenseful and dark. That’s all well and good, but talk is talk: remember what they said about wanting to use 3D properly and not just fling things at the audience in the previous movie? Marketing buzz is cheap, results are all that is really worthwhile in Hollywood.

Perhaps the most intriguing production news surrounding the film was that neither series directors James Wong or David R. Ellis were returning (Ellis was probably not asked back after the poor reception of The Final Destination and/or because he was working on Shark Night 3D and Wong… probably because everyone hated Dragonball Evolution and/or because he was working on the much ridiculed TV show, The Event). Instead, the producers announced the acquisition of a new director, Steven Quale. This was Quale’s first major film, having only directed a TV movie and the documentary Aliens of the Abyss. However, the man did have some impressive credits to his name, being second unit director on both Titanic and Avatar. As you can probably guess from his short CV here, the man is friends with James Cameron. In fact, apparently it was James Cameron who personally recommended him to direct this movie, which is pretty damn impressive. So, a man who has connections to the legendary James Cameron was going to be directing Final Destination 5? Colour me intrigued… 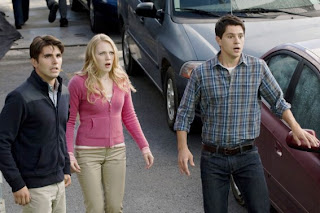 Well enough about the production and now onto the meat of the film itself. The characters are what you’d expect from this series – not the worst, but not the best either. I can’t say any of the leads did a standout job, but they were all serviceable. The tradition of throwaway characters continues though, with 4 obvious ones this time around (and 1 red herring): Isaac Palmer (who went to the Frankie Cheeks school of douche-baggery), Dennis Lapman (“the boss”, although he’s so throw-away in this movie that it’s actually quite hilarious), Olivia Castle (the obnoxious but pretty girl in the cast) and Roy Carson (the angry factory worker, who actually wasn’t even a part of the actual disaster). The red herring, Nathan (an intentionally subverted token black guy), is actually pretty cool, although he’s not given enough time to develop. While this is a bit of a problem in most Final Destination movies, it’s less of an issue here, since there are some actual character development moments built into the script, so I actually found myself sympathizing with the non-expendables (as few in number as they were).

As expected, the film follows the same basic set-up as the other movies, but with a bit of a twist… which we’ll get to in a minute. First of all, we have to talk about the absolutely spectacular opening disaster. In fact, it was declared one of the single best sequences of any film all year, in a year which included such movies as Transformers: Dark of the Moon, the final Harry Potter film, Sucker Punch and Rise of the Planet of the Apes. It’s not even empty praise either – it really earned it. Don’t believe me? Well I’ll let it speak for itself:

It’s pretty clear that Quale has learned a great deal about spectacle from Mr. Cameron, because this scene is very Cameron-esque in its crowd-pleasing scope. I haven’t seen it in 3D, but from what I hear, it’s fantastic and I can believe it. The depth provided by it must make the viewing experience absolutely dizzying, and further plays (and preys) on peoples’ fear of heights. If I had to complain about this sequence, I’d say that I’m a little off-put by the sudden emphasis on gore, but it doesn’t really take away from the scene all that much. As far as I’m concerned, Final Destination 5 has the best opening sequence in the whole series.

So, does the movie blow its entire load in the opening 10 minutes then? Well, not exactly. Like I said, there’s a bit of a twist on the normal formula. However, rather than the twist being “he gets more than one premonition!” or “the photos have clues!”, the writers have come up with something quite interesting – Bludworth (Tony freaking Todd is back!) reveals that the only way to successfully cheat Death is to kill someone else in order to steal their remaining years away from them*. This idea adds a lot of suspense and tension to latter-half of the film which, in previous movies in the franchise, tended to be rather weak. They honestly should have introduced this new element in Final Destination 3, because it really is a great conceptual evolution for the series.

Beyond even the twist on the formula, Final Destination 5 would still be considered one of the best entries in the series if only for some of the masterful death sequences. The first of these, the gymnastics sequence, is so tense that I consider it a textbook definition of great suspense. Quale just does a great job setting up a number of potential causes of death, giving us many red herrings and just plain stringing the audience along until the shockingly simple payoff. Check it out:

Holy crap. That’s by far the best death scene in the whole movie (in part because it doesn’t rely on excessive gore to satisfy the audience), but the others don’t exactly disappoint either. The other one of particular note is Olivia’s death, which is sure to get more than a few people shifting in their seats just from the set-up alone. I won’t go into much more than that, but this image alone should suffice… 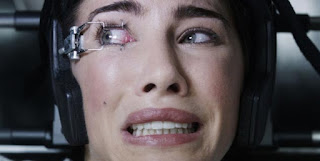 Also, I’d be remiss if I failed to mention the ending. If you plan on seeing it, then skip ahead a paragraph because this is a pretty massive SPOILER… So it turns out at the end that the two leads have survived the ordeal and are going to live happily ever after as a chef’s apprentice in France… wait a second. That’s right, the movie was secretly a prequel all along, and they just stepped onto the plane which blew up at the start of the first movie. I’m pretty sure no one saw that coming (in fact, on more than one list I’ve seen, it’s considered one of the best and most unexpected twists in cinema… not at the same level as Planet of the Apes mind you, but it’s quite impressive for a movie of this calibre). Again, it’s a bit of a piss-off to see the characters get killed at this point, but the cleverness of the ending softens the blow enough that it’s totally forgivable.

So, I’d say that it’s pretty clear that I quite liked this movie. Hell, I even loved the opening credits. While it’s still pretty unambitious conceptually, the level of craftsmanship on display is shocking. On my first time seeing the series, I would have put Final Destination 5 second to the original, but now that I’ve seen them both a few times, I’d have to give the crown to this entry. It’s just so well-done compared to the somewhat-flawed original.

With the success of this film (it made $158 million worldwide) it seems like there will be more entries in the series soon… and while I haven’t heard any announcements, I’d be satisfied if it ended here. The chances of pulling out another movie of this calibre are pretty slight, considering the producers’ resistance to any ambition beyond “teen slasher movie”. However, if it does happen, I hope that they really run with the premise and create something which breaks formula. I’ve got a few ideas of my own floating around, so if anyone from New Line is reading this, you should hit me up *wink wink*. I’d welcome any comments on what people think would improve the series as well if it continues.

Aaaand that does it for my first retrospective! If you have any comments on this series, I welcome them. Also, if you have any suggestions – be it for future retrospective series, or how I can improve my current style – then I’d welcome those as well. Finally, if you liked this, then I’d appreciate if you’d “Follow” the blog – I get ~25-50 views a day, but it’s always good knowing that you’re amassing an audience. Thanks for reading! 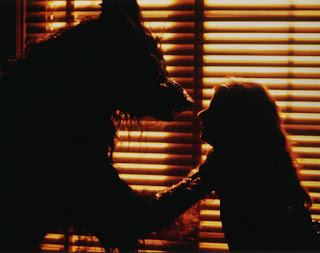 *This, of course, opens up some speculation as to Bludworth’s origins. The easy train of thought is to assume that he is Death incarnate, but the producers have denied this multiple times. However, I actually read a theory on TV Tropes which really stems from the twist in this movie: the theory goes that Bludworth had a premonition and killed someone in order to keep himself alive… in fact, he may have killed several people over the years to basically achieve immortality. It’s a chillingly intriguing idea which could provide plenty of material for a potential movie…