Hey, just a quick post regarding something really odd which is occurring on the blog. About a month ago I noticed that my page views were steadily climbing until it became common for them to get around 300 per day, although this soon stagnated to ~50 per day for quite some time. However, I’ve noticed that this seems to be a common trend, and so page views have peaked and dropped as long as I’ve been running this blog. As a bit of a stats-geek, it has actually been quite interesting and it’s fun to speculate on the causes of the peaks. For example, almost half of my total views have been on my Hulk review, and I believe that this is because The Hulk became very popular after the release of The Avengers – as a result, whenever a Marvel event happens (Avengers on DVD, Iron Man 3 hype, etc), its page views seem to go up. Interestingly, Final Destination 3 has been garnering much attention lately, so much that it has become my 2nd-most viewed post (still about 1/9th of the Hulk post, but still quite substantial all things considered), and Final Destination 5 isn’t far behind. If the trends continue, I predict that they might actually overtake Hulk before the end of the year.

Anyway, enough of that. Over the past 2 days, I’ve noticed that my page views have suddenly skyrocketed. I’ve gotten so many views that nearly 10% of all of my all-time page views have been in the last 48 hours. Holy crap. 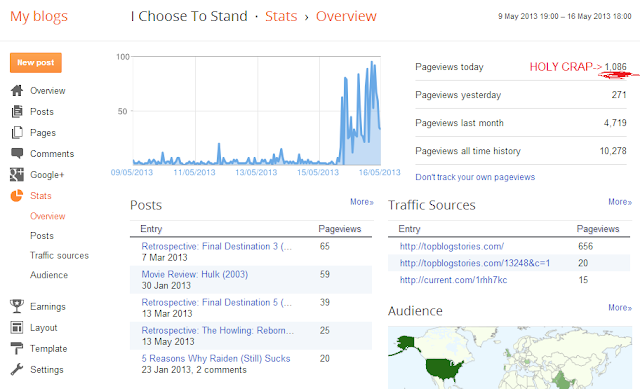 If you studied the picture above, you’ll see that some website called “topblogstories” is responsible for most of those redirects. Now I’m not sure why I’m getting redirected to from that website, but it would seem that topblogstories.com is… a porn/escort/probably-phishing site. I probably should have guessed. Oh well, I guess that goes to show that if you want to get noticed, somebody has to get naked!

Whatever the case, that’s enough of that. I think I’ll start the next retrospective in mid-June. I’ve got 2 franchises I’m interested in tackling, although I’m leaning more heavily towards one of those for simplicity’s sake… I’m pretty damn busy at the moment, juggling a work and school (why did I take a bloody biology course? I hate science…), so it’s difficult for me to commit to all of that and then find time to watch a movie and review it more than once a week. Whatever the case, I do my best to commit to my “at least once a week” policy and haven’t broken it yet!

Also, I’m going to be paintballing again in 10 days. It’ll be the 3rd straight year my team and I have attended the D-Day Tippmann Challenge at Commando Paintball, and so there will be more footage uploaded to my Youtube channel shortly thereafter. If you want to view my previous paintball videos, click here or on the Youtube channel button link near the top right of the blog.

Anyway that’s it for this post. I’m curious to see how long this topblogstories thing continues, but I just wanted to share that little update with my readers. Hopefully I didn’t bore anyone to tears.