Welcome back to part four of the Resident Evil retrospective! In this entry we’re going to cover the fourth movie in the franchise, Resident Evil: Afterlife! Once again, the latest Resident Evil movie (Extinction) made even more money than the previous one (Apocalypse) – obviously this meant that the series had to shamble on another day. Despite Extinction being billed as the last entry in the series, Resident Evil: Afterlife was soon announced… in 3D (y’know, back when people still got excited when a movie was released in 3D)! Afterlife and the game it draws inspiration from, Resident Evil 5, mark a clear tonal shift to intense action for the franchise… would it work out in the end? Read on to find out… 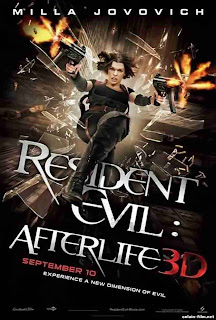 What is with Resident Evil and dual wielding!?!

After the surprisingly decent Extinction, the Resident Evil franchise finally seemed to be settling into a groove. After releasing his Death Race remake, Paul W.S. Anderson returned to the franchise once again, but this time he was taking the director’s chair once again (in addition to screenwriting of course). Entering production shortly before Avatar was released, Anderson and company believed that 3D was going to be the next big thing in Hollywood blockbusters – as a result, they decided to shoot Afterlife in 3D. I’m actually kind of happy with the way his was handled – rather than going for the cheap 2D-to-3D conversion cash-in, Anderson decided to shoot the film with actual 3D cameras. In my opinion, 2D-to-3D conversions are one of the major reasons why 3D has become a hated gimmick in the last couple years, because it just looks awful (as I can attest having watched Voyage of the Dawn Treader, Thor, Captain America and Clash of the Titans). On the other hand, all of the most visually stunning 3D movies I have seen have been filmed in 3D (Dredd, Life of Pi, etc). Sure it costs more to do, but the result is worth it if handled skillfully. So yeah, kudos to Paul W.S. Anderson for doing the right thing.

While I’m glad they filmed the movie in real 3D, I have to admit that I haven’t actually seen it in 3D. However, I can imagine how it would look because there are some sequences which are visually stunning even in 2D – Paul W.S. Anderson can really frame a good shot. On the negative side though, the 3D is often used as a gimmick. Crap is thrown at the audience throughout the whole movie: axes, coins, knives, bullets, hell even a pair of glasses at one point (as seen above). As I said in the restrospective for The Final Destination, this is just a cheap, gimmicky way to use 3D and just kills any sense of immersion. So… umm… kudos for filming in real 3D, but way to squander it in the end, Paul. 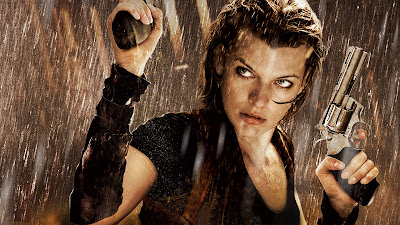 Moving onto the cast, the film stars most of the usual suspects – Milla Jovovich is back, obviously, and so is Ali Later as Claire Redfield (who thankfully gets to do more this time around). Sienna Guillory also makes a cameo appearance at the end, reprising her role as Jill Valentine. Spencer Locke also returns as K-Mart… but honestly, who cares? She didn’t do anything in either movie whatsoever so she’s hardly worth the mention. Anyway, the major new additions in Afterlife are Wentworth Miller as Chris Redfield and Shawn Roberts, taking over as Albert Wesker. I actually quite like Wentworth Miller in this movie, he definitely has a suitably badass air about him. Shawn Roberts is decent as Albert Wesker, pulling off the smug and imposing look although it comes across like he attended the Dick Dastardly school of villainy at times. Aside from the main cast, the movie also features a group of survivors in a prison, all of whom are just transparent as plot devices – there’s the useful black guy (thank God he doesn’t do street slang), the douche bag, the T&A and then the obligatory redshirts.

As for the movie itself, it opens on an exceptionally high note: the opening credits are absolutely awesome. The music, the cinematography and the slow motion all combine to make for a very memorable opening to the movie… and then the movie launches into even higher gear. Remember how Alice got ahold of an army of clones at the end of Extinction? I thought they would cheap out on this or handwave it away, but they actually go ahead and have an army of Alices attack an Umbrella Hive. This attack sequence is quite good and really opens the film on a high note… even if it’s only real excuse for existing is to conveniently get rid of Alice’s army and her super-powers to make the rest of the movie work. Yup, plot conveniences strike again, but at least we got an awesome first 10 minutes out of it.

As for the plot… well it probably makes the least sense of all the Resident Evil movies up until this point, which is saying a lot. It’s clearly just a thin pretense to support the action sequences. Put simply, Alice finds Claire (who has convenient amnesia) in Alaska – turns out Arcadia isn’t a safe haven after all. They then fly 3000 miles in a Yak-52 to Los Angeles, where they decide to land on a maximum security prison and help out the survivors there. Cue an hour of zombie action, culminating with them landing on the Arcadia (turns out it’s an Umbrella tanker) and battling Albert Wesker. In terms of plot, it’s absolutely brain-dead and the list of plot holes/conveniences I noticed while watching is just staggering. Why does Wesker carry a syringe on himself which can take away Alice’s powers (and his for that matter)… and how would that even work anyway? How the hell does a non-super powered Alice survive a plane crash unrestrained when it smashes head-first into a mountain? Why does Umbrella still want to experiment on people when they’ve already wiped out most of the world’s population? Who is Alice leaving her video blog for (it seems like just a lazy way to shoehorn in exposition)? Why is there a maximum security prison in the middle of down-town Los Angeles? How can zombies dig through solid concrete? How the hell does the Axeman make any sense? Why are the zombies suddenly Plagas? What are the chances that Chris Redfield happens to be at the same prison that Claire ends up in (not to mention that he’s apparently been locked up for about 5 years)? 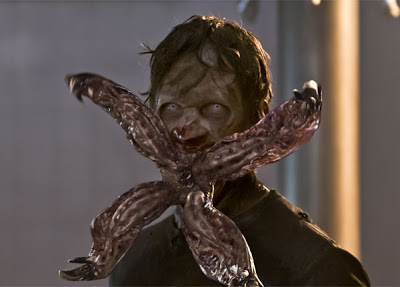 While the plot is pretty much dead on arrival, that’s practically expected with Resident Evil by this point. What’s really important is that the action sequences are stunning. The latter half of the movie is littered with action and it is at these moments that the movie really kicks into high gear. The zombie attacks and gun battles are all pretty good, but the movie features three standout sequences. The first is the opening which I mentioned previously. The second is the cliffhanger ending, which is just epic and really heightens expectations for the sequel (even if you already know it’s going to suck). The third is the shower fight against the Axeman. This scene is jaw dropping… and pretty damn sexy too. Ali Larter really kills it here, and the slow motion and drops of water make the scene a visual feast. Paul W.S. Anderson should direct music videos. Seriously, just watch it:

Sure, the slow motion is gratuitous, but it’s done well (although the movie would probably be 15-20 minutes shorter if you cut out all the slow-mo in it). Resident Evil: Afterlife is a mindless guilty pleasure movie – the plot is pretty much non-existent, but the action scenes compensate for it for the most part.

Be sure to come back soon for the final entry in this retrospective, Resident Evil: Retribution!