Welcome back to part three of the Resident Evil retrospective! In this entry we’re going to cover the third movie in the franchise, Resident Evil: Extinction! However, before we get to that I want to speak briefly on critic-audience disparity, which has come to mind with the recent release of Man of Steel (and which can be applied to the Resident Evil film franchise by its fans). Superman Returns had a high critical reception (75% Tomatometer), but had a mixed reception with audiences (67% liked it). Conversely, Man of Steel has had a very mixed reception (56% Tomatometer), but is scoring well with audiences (82% liked it). One audience rebuttal to this I have read is that critics are not fans of the property in question, and therefore do not know what makes a proper franchise film. However, this makes critics look like robots, not to mention implies that they don’t have any personal interests of their own. For that matter, why should it matter if they’re a fan of the property? If they think the movie’s bad then that’s their opinion, and the one they give to a general audience who may not be fanboys either. For example, I love werewolves. I thought that The Wolfman remake was a great werewolf film, despite the movie’s very tepid reception (35% Tomatometer and 38% audience approval). Reviews are ultimately just opinions. However, I’m more inclined to trust a critic since they have seen a wider variety of movies and therefore have more to judge a film against than the average movie-goer. As a result, I’m expecting Man of Steel to be very middle-of-the-pack when I finally see it. 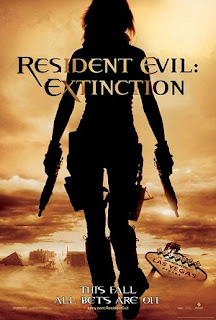 Simple, but striking. The poster conveys the style and theme of the movie quite well. This poster was pretty badass as well.

Although Paul W.S. Anderson was once again given scripting duties, the actual directing of the film was passed off to Russell Mulcahy. Mulcahy was an inconsistent but well-established director, having directed a ton of music videos. As for his filmography, he was best known for directing the cult classic, Highlander. Unfortunately, his CV also contains epic turds, such as The Scorpion King 2: Rise of a Warrior and Highlander II: The Quickening (although budget and producer interference played a major role in these flops). Still, he was certainly a step up from Alexander Witt. 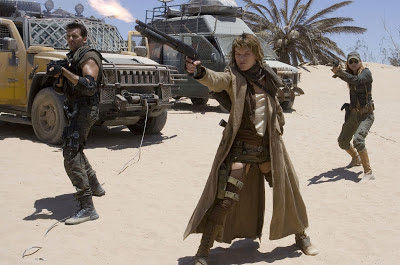 In terms of its cast, most of the (surviving) main characters from Resident Evil: Apocalypse return. The only major character who is missing is Jill Valentine (Sienna Guillory), because she was appearing in Eragon instead (ouch, bad move…). Taking her place as the secondary heroine was Retrospectives veteran Ali Larter, who was previously featured in my Final Destination series. She takes on the role of Claire Redfield. Considering that Guillory did a fairly poor job as Jill Valentine in the previous film, this was definitely a step up. Taking the reins as the main antagonist is a minor character who appeared in Apocalypse, Dr. Isaacs, played by Iain Glen (holy shit, Jorah Mormont!). The main villain of the video game series, Albert Wesker, also makes an appearance, played by Jason O’Mara… unfortunately, he isn’t given anything to do, and just comes across as very bland rather than cunning and sinister.

The cast actually does a decent job, especially compared to the other movies in the series. By this time, Milla Jovovich has really settled into a rhythm, totally convincing us she’s a cool and killer badass. I quite liked Oded Fehr as Carlos Olivera as well – his role is expanded a bit from the previous film and we actually become fairly attached to him (although the romance between he and Alice just comes out of nowhere). Ali Larter does a decent job as Claire Redfield, although she isn’t given a lot of material to work with (a common complaint, which also extends to the secondary characters). Hell, even LJ’s role gets expanded this time around and I actually found myself sympathizing with him… that said, I was still overjoyed when he died, just because of how annoying he was in Apocalypse. I also liked Iain Glen’s Dr. Isaacs, who really brings some much-needed campiness to the proceedings. He plays the usual mad scientist role, but he’s unpredictable – I mean, how unhinged to you have to be to be too crazy for even the Umbrella corporation!?!

As for the plot of the movie, Extinction is, in a lot of ways, a massive middle finger to the fans of the games. Why’s that, you might ask? Put simply, the movie goes post-apocalyptic, killing off 5/6ths of the world’s population, whereas the video games revolve around preventing another outbreak like Racoon City and stymieing bio-terrorism. Basically, at this point the franchise has even less to do with the video games than the previous two movies did. However, I think this is actually somewhat of a blessing in disguise – this allows the movies to go places the video games never did (sort of like what a video game tie-in for a movie would die). Furthermore, it gives the movies the freedom to do whatever the heck they want within the setting. Finally, it allows angry video gamers to finally divorce themselves from the franchise all-together. As a result, Extinction marks the first entry in the franchise where the opening of the film discards elements from its predecessors to make the movie work conveniently.

Resident Evil: Extinction owes its existence to two very obvious sources – the first being Day of the Dead. Let’s list some of the familiar elements, shall we? Extinction features scientists in an underground laboratory surrounded by zombies behind a chain-link fence. In this underground laboratory, they’re trying to domesticate the zombies, showing them objects from their previous life and using them as well. Hell, even the Umbrella soldiers complain about losing men because they keep having to go to the surface. The links to Day of the Dead are just too similar to be a coincidence. The second major influence is Mad Max 2: The Road Warrior (in fact, when this movie came out I called it “Mad Max with a Vagina”). While the similarities are more cosmetic than plot-related, the movie revolves around a civilian convoy scavenging for resources in a post-apocalyptic desert, who are saved by a lone badass who is left behind as they head off to a safe haven. Again, the similarities are clearly there and hardly subtle. 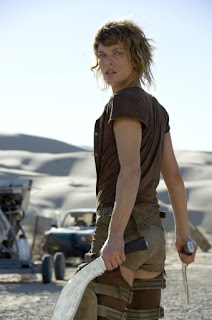 Of course, as with any Resident Evil movie, the plot is just riddled with holes. Why does Umbrella run amnesiac Alice clones through an assault course filled with booby traps that she has no chance of avoiding? Why is she then a “failure” for not having completed their impossible course? For that matter, are they planning on releasing clones with amnesia into warzones? Hell, why bother with this testing when they’ve already killed off 5/6ths of the world’s population? How can the T-virus kill all of the world’s vegetation and dry up most of the water? Why would Umbrella want to domesticate zombies? And how many freaking super zombies were in that small container in Las Vegas? It looked like maybe a half dozen, but they must have killed about 50 of them in the ensuing shoot out… And while this isn’t really a plot hole, why the hell would Sony want to have product placement in the movie… for Umbrella!??!!

The usual Resident Evil-related gripes aside, I actually don’t hate Extinction by any means. Sure it’s a rip-off of The Road Warrior and Day of the Dead, but at least it picked two great movies to emulate. The story also features plot holes, but they’re far more minor than in any other entry in the series. In fact, Extinction largely succeeds in that it does a good job not screwing up. There’s no stupid attempts at humour, no major editing mistakes and far less issues with the plot than in previous entries. The movie looks extremely stylish due to Mulcahy’s direction, similar to The Book of Eli. Extinction also goes to some effort to actually set up the story, giving us over 30 minutes to get situated and meet the characters (most are left undeveloped, but at least they’re introduced… unlike in Apocalypse…). Unlike every other Resident Evil movie, Extinction also manages to be suspenseful at times, despite occurring entirely in daylight (feeling silly now, Apocalypse?). On top of that, it’s less of a cartoon than the previous movies – characters actually miss their shots and people die and it feels like it means something. Hell, even freaking Carlos, a character from the video games, dies – who expected that!? It was a pretty ballsy move in my opinion, especially after they gave him a far better role in the movies than he ever got in the game he appeared in (Resident Evil 3: Nemesis). Finally, the zombie make-up is absolutely spot-on – despite having identical production budgets, Extinction blows Apocalypse out of the water visually.

Most importantly though, the action scenes in Extinction are fantastic and really mark the point where the franchise became a full-on action movie series with minor horror elements. The early battle between Alice and the zombie dogs is pretty great, and the Las Vegas zombie shootout is a thrilling climax, but the real standout is the zombie crow attack. Seriously, the crow sequence is amazing and is probably my favourite sequence in the whole franchise. It’s also utterly unique – no other zombie movie is going to give you a sequence like this. It’s a truly suspenseful, exhilarating and frightening sequence and serves as a good introduction to Alice’s new powers.

Actually, speaking of which, Alice has gone full-on God Mode in this entry. In addition to her unbelievable accuracy, martial arts abilities and general super-powers, she now has telekinesis and an army of super-powered clones at her disposal… so yeah, she’s basically an over-glorified Mary Sue at this point in the series. Appropriately, she was pregnant with Paul W.S. Anderson’s child at the time so that goes so way to explaining why he’d be fawning over her so much (and maybe also explain why she’s naked for the third movie in a row).

The only major issue I have with Extinction is its third act, which is extremely weak. Alice infiltrates an Umbrella hive and then has to fight Dr. Isaacs, who has become a Tyrant. The fight just comes across as exceptionally hokey and isn’t anywhere near as engaging as the rest of the movie was. On top of that, Alice is just too powerful at this point – she beat the shit out of Nemesis before she gained telekinesis, what chance does a more minor Tyrant like Isaacs stand? Still though, Resident Evil: Extinction manages to be a fun (but mindless) action movie on the whole, which is more than I can say for the previous two films. It’s far from great, but I can think of far worse ways to spend an afternoon.

Be sure to come back soon for part four of this retrospective, Resident Evil: Afterlife!