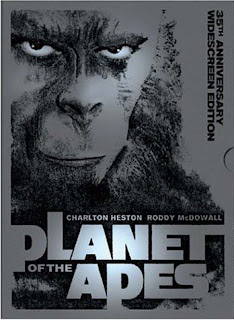 The 35th Anniversary Edition DVD cover – probably the only Planet of the Apes marketing which  makes an obvious effort not to spoil the twist.

Planet of the Apes was based on a French novel by Pierre Boulle (authour of The Bridge Over the River Kwai), La Planète des singes. The rights to the novel were picked up by producer Arthur P. Jacobs, who spent quite some time pitching the film and trying to get a script written for it. Rod Sterling, creator of The Twilight Zone, wrote one of the scripts for the film which would have featured futuristic apes (much like in the novel). However, the most important addition that Sterling brought to the film was its famous twist ending (which was not present in the original novel). Later rewrites replaced all the dialogue, changed many character names and moved the setting to a more Victorian ape society, but the basic structure and the ending were all retained.

The film featured some fairly well-known actors in its principal parts. The most obvious superstar amongst the cast was Charlton Heston. Already famous for The Ten Commandments and Ben-Hur, he had the star power and rugged looks to portray the “hero” of the film, George Taylor. Shakespearean actor Maurice Evans was cast as Dr. Zaius. Kim Hunter, who had won an Oscar for best supporting actress as Stella in A Streetcar Named Desire, was cast as Zira. The other fairly big name in the cast was Roddy McDowall, who played Cornelius. Of the original cast, McDowall was actually probably the most important, as he would go on to appear in the first 5 films in some capacity (but we’ll get to that later of course). All of the main actors in the film do a good job – Evans really sells it as the villainous Dr. Zaius, making us really hate him for his hypocrisy. Cornelius and Zira are both quite good in their own right, although not always in the most obvious fashion. For example, you might notice that Cornelius and Zira twitch their noses when they’re surprised or thinking – it’s a small detail, but quite impressive that they’d throw in a subtle mannerism like that for their ape characters which go a long way to making them feel like legitimate characters. Heston sometimes gets some flak for hamming up his role in this film, but I think it really works to show the desperation and insanity of Taylor when he’s in captivity… after all, he’s stuck on a planet which is totally upside-down as far as he’s concerned. On top of that, his character is mute for about half of the film, and he does a great job helping us sympathize with him in spite of that limitation. The last notable character is Nova, played by Linda Harrison. She’s basically mute the whole time and so doesn’t have much to work with, but she does her job well enough as the “savage beauty” and generic love interest. 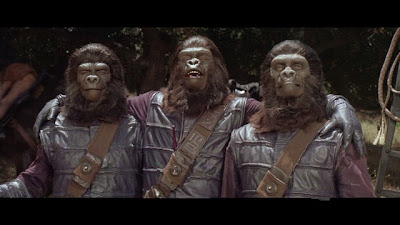 The film features a great plot which is dripping with biting satire that wouldn’t be out of place in a Jonathan Swift novel. Even better, the satire is still quite relevant to modern audiences, with apes hunting and experimenting on humans (animal testing), an ape social order (there’s an obvious caste system in place), conservatism in science, the apes putting Taylor on trial and faith vs science in regards to the origin of man (and ape). The film also features some more on-the-nose satirical lines which, er, ape common sayings, such as “you know what they say, human see, human do” or the gorilla’s funeral (“the deceased once said to me ‘I never met an ape I didn’t like'”). There’s also priceless sight gags, such as the stuffed humans in the museum and the “3 wise monkeys” in Taylor’s trial (which was actually improvised on set).

There are also some just plain great moments in the film. The trial sequence is notable for its satire, but it also manages to balance some truly affecting moments. I think my favourite is actually when the head orangutan says that Taylor’s clothing smells repugnant and forces him to strip naked, dehumanizing him in the process. The look on Heston’s face during this is just tragic and is one of those moments which really shows his acting chops as far as I’m concerned. The film also features some absolutely iconic sequences, such as the first appearance of the apes as they hunt the humans through the corn fields, or when Taylor regains his speech. 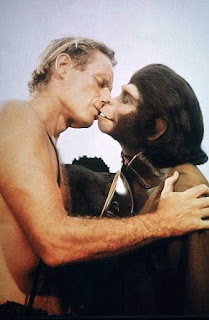 Actually, one of the things which interests me the most about Planet of the Apes is that the hero isn’t really a hero at all. He’s a cynical, self-serving asshole through-and-through. It’s plain as day at the start of the film, but it’s easy to forget this fact during the middle section when the apes become the greater evil. However, Taylor shows his true colours again in the third act when he orders around Zira and Cornelius (who are only trying to help him), threatens to execute Dr. Zaius and just generally acts like a dick. The purpose of this of course is to remind us that humanity is inherently selfish and violent, which sets up the ending and actually makes the villain sympathetic. Dr. Zaius comes across in the film as a despicable character who is only interested in perpetuating the status quo and who exerts complete authority over the heroes… but in the end, we’re shown that he’s actually pretty morally ambiguous. Not only is he trying to save his people from destruction, but he also “wins” by covering up any evidence of the origin of the apes.

Of course, this leads right into the twist. Planet of the Apes has an all-time classic ending, a total gut-punch and easily one of the best twists in all of cinema. It’s fantastic and easily elevates Planet of the Apes from a “great” film to an “amazing” one. I got lucky and saw the movie when I was 11, so it actually hadn’t been spoiled for me yet. I had seen Spaceballs, but I didn’t really understand the reference or get the significance of it until I actually watched Planet of the Apes. It was an enthralling experience, I can only imagine how crushing it would have been for unprepared audiences in 1968. 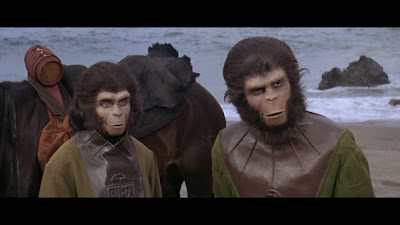 Holy crap, how did I get this far without mentioning the make-up effects? Simply put, the make-up in this film is exquisite. The effects may not look like a modern day chimpanzee or orangutan, but they are very convincing as highly evolved apes. In fact, I have a very hard time distinguishing where the prosthetics begin and end – they’re that good. The only real exception to this is on Maurice Evans’ prosthetics sometimes – on the very rare occasion, you can see the end of the inside of his mouthpiece, but this is only a couple times in the whole movie perhaps. On the whole, the make-up effects are superb and still fairly convincing today… unfortunately the special effects are very dated though. In particular, the opening scene with the Icarus travelling at light speed is almost embarrassingly bad looking. Thankfully the film does not rely on these sorts of visual effects at all, discarding any need for such effects within the first 5 minutes (aside from some matte paintings, but these are all perfect). I hate to imagine how a film which relies solely on visual effects is going to look in 50 years… Transformers, I’m looking at you.

Other positives: Jerry Goldsmith’s soundtrack is very notable. His score is very avant-garde, with a very primal sound which is almost reminiscent of a horror movie. The landscapes are also very breathtaking – the Forbidden Zone scenes are shot in the Grand Canyon around Lake Powell and the ending is shot on a beach in California, both of which make for stunning visuals. On the more negative side, Nova’s basically a useless female love interest and eye candy which dominates films of this sort… although her one obvious positive is that she helps Taylor to care for some of humanity again. However, if you’re a feminist then you’ll probably get offended by the handling of Nova, although at least Zira’s a very strong female character.

Bottom-line: Planet of the Apes is awesome. It’s easily in my top 5 favourite films of all time… and maybe even my top 3. It’s an all-time classic. If you haven’t seen it, then do so!

Be sure to come back soon for part two of this retrospective series, Beneath the Planet of the Apes!