Sorry if this blog post feels a little scatter-shot, but my update day happened to fall on the same day as my two final exams, and so I’m writing this in the time between them… then it’s off to see Kick-Ass 2!* However, in the meantime let’s take a look at some of the wild news I’ve had bookmarked for you wonderful people…

We’re gonna start off with a bit of older news, but it was so funny that I couldn’t not post it. You may remember a month ago that Toronto was hit with severe flooding, with total costs of the damage reaching nearly $1 billion. The scale of the flooding made for many stunning images which were a reminder to all of the unpredictability of nature… nah, just kidding, it made people put on their tinfoil hats and go online: 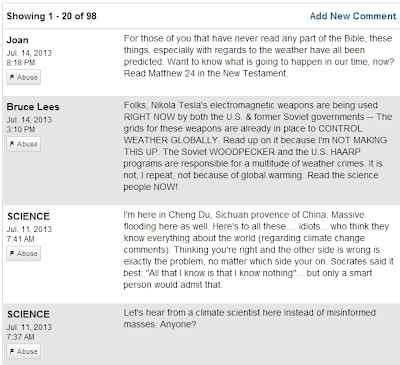 These were literally the first comments on the article (you can check it out yourself, they’re still the top comments on the linked story). Of course we have an apocalyptic harbinger, because suddenly a flood actually affects you and it must mean that the Bible was speaking directly to you when it said there’d be increasing floods (what are the chances that people said the same in centuries past during floods?). Bruce Lees’ comment is the real gold though, the detail of his post really makes me think that this isn’t just trollbait. If you’re looking to start a flam ewar, why would they go into detail about the “Woodpecker” and “HAARP”? Furthermore, these are actually involved in conspiracy theorizing, so they don’t just pull words out of a hat and laugh – there’s a very good chance that they actually believe that the government is controlling the weather. Even better, they tell us to “read the science people, now”, which obviously will just further refute their special blend of insanity. Then, rounding out the stupid comments is “SCIENCE” who seems to be trying to mediate to no one in particular (and everyone at the same time). Actually that describes them pretty well because they don’t seem to be settling on a point at all: they are saying, more or less, that sometimes people are wrong, but not always. Not the same level of stupid as the other comments, but it’s one of those typical Internet commentators who thinks they can wield a level of control and pacify millions of anonymous people’s opinions. Good luck with that.

Oh and speaking of crazy people, there’s the woman who claims to own the sun and is going to charge us for using it. I think I can leave it at that because that’s another special brand of crazy (…or perhaps she’s shrewd like a fox).

Anyway, moving away from insanity to something more political, I was entertained by an article recently about why the media is not liberal. I know that the term “liberal media” gets passed around a lot by self-acknowledged conservatively-biased news networks (such as CNN and Sun News Media… and, uh, by my parents as well). I don’t really agreed with that assessment, but this article actually points out why it’s a flawed idea quite well. If anything, the media is (in general) probably closer to a centrist position, taking bits of conservatism and liberalism. There’s also the possibility that more conservatives are becoming increasingly alienated by gay rights, marijuana legalization, libertarianism (which is actually a conservative trait generally), etc so so assume that the media is automatically biased against them. That’s just my thoughts at the moment, but I’m planning on reading into it more and coming up with a more concrete opinion.

And rounding out this blog post is a diatribe on the biggest cancer in TV today, TLC, and their 1 hour special The Man with the 132-lb Scrotum. Apparently back in the day TLC used to be an educational channel, but then they realized “hey we can make a lot of money off of derivative reality TV and sensationalist garbage”. Hence a line-up of mindless TV shows about antique hunters, pawn shops, guys making cakes, retarded rednecks and now a guy with a scrotum that weighs almost as much as I do. It’s total tabloid attention-grabbing, exploiting the guy (who is in serious need of medical attention) like he’s a freak show attraction. TLC is a terrible TV network and this latest special just further reinforces that idea.

Finally, just a note on the next retrospective series: since I’ll be done school today, I’ll finally have time to work on it. As a result, the new series will begin next week. Be sure to tune in for it, it’s going to be funner than a barrel of monkeys!

*POST-SCRIPT: I actually quite liked the movie, I know it’s getting savaged by critics (28% TomatoMeter as of 20/08/13), but if you’re a fan of the original it retains much of the elements which made the first movie so good. That said, it’s not as good as the first one was, but it is far, FAR better than the comic it’s based on.