I’ve never really had much interest in the Tomb Raider franchise. There was always a stigma of sexism which surrounded the series due to Lara Croft’s sex icon status. If you were a guy and you played Tomb Raider games then you only wanted to stare at her boobs and ass. However, with the release of the Uncharted series, Indiana Jones-style adventuring was back in vogue and an intriguing reboot of the Tomb Raider series was announced that finally piqued my interest. It was going to star a vulnerable, unskilled Lara Croft. It was going to be more about survival than action. It was going to have a very mature story. Lara was actually going to be realistically proportioned. Stigma be damned, as soon as it was announced the Tomb Raider reboot was on my must-play list. Did the game manage to live up to the hype? Read on to find out… (Note that this is only a single-player review, I didn’t bother with the unnecessary multiplayer mode.) 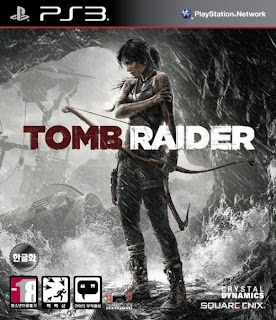 Tomb Raider opens in a bit of a mess. I’m not referring to the whole sinking of Lara’s ship and dead bodies kind of mess: I mean that it fumbles the narrative and gameplay right out of the gate. It starts in media res which might be fine for an action-focused game, but this really hurts the narrative off the bat. If they had given the game a real opening, maybe I would have known who the secondary characters where and maybe I actually would have given two shits about them. However, story seems to have been set aside in favour of an Uncharted 2-style explosive opening – a terrible compromise in my opinion, since it hamstrings at least the first act of the game. In fact, the opening also features a jumble of quick-time events and scripted set-pieces which feel like its hewing too closely to the Uncharted formula… don’t get me wrong, I love the Uncharted games, but their formula doesn’t work in every game. It’s kind of like how after Die Hard every action movie was set in a single location, or how after The Bourne Ultimatum every action movie had quick cuts and shaky cam: it just reeks of studio-enforced money-grubbing pandering to the lowest common denominator. 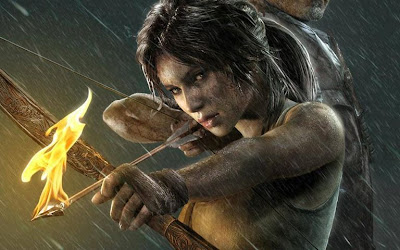 While the game’s opening was a bit of a mess, there are some great mechanics underlying the gameplay. The game features an XP system which is very fun, encouraging you to maximize the yield of your actions to level up. It might be a little tonally-off for the young, vulnerable Lara to be headshotting everyone with her new bow, but it’s forgivable. The game also features a weapon-upgrading system based on finding salvage, which changes the weapons as one would expect it to. However, there are also some very cool upgrades, such as explosive or incendiary ammo or the ability to get burst-fire on your pistol. In addition, the game features plenty of traversal options when you unlock the pick axe and rope arrows – the game ends up playing like a funner version of Assassin’s Creed as Lara finds herself traversing the environment (although these can be somewhat imprecise… I died from failed jumps more than anything else). Finally, while the narrative might be half-baked and the secondary characters aren’t given their due, Lara Croft herself is given a proper development and is actually fairly well fleshed out. Her development is quite natural and actually works into the game with the player unlocking new abilities and weapons.

However, as I’ve alluded to, weak point of the game is definitely its story. Between the gameplay, the half-baked characters and the script, it just doesn’t convince. Why should we give a damn about any of the characters when we don’t even know anything about them (barring Conrad Roth I suppose)? Most of them are just there to be plot devices… especially Whitman, who you know is going to be a traitor as soon as he appears on screen. Lara’s supposed to be vulnerable and just barely surviving, but how are we supposed to believe this when she survives a dozen falls from extreme heights by pure luck? Or how about when racks up a bodycount in the hundreds all by herself? This particular problem definitely feels like an Uncharted ripoff – Lara just so happens to land on an island inhabited by cultists of the “murder everyone for no reason” kind. Narratively, Tomb Raider just doesn’t lend itself to the requisite third-person shooter bodycount and the game actually gets quite tedious at the points where it turns into a linear shootout (especially because enemies LOVE throwing molotov cocktails which force you to move from cover and back over and over again). The game’s also just gratuitously violent at times, seemingly just to hammer home that it’s “gritty” and “mature”. There’s one section which is a total rip off of The Descent where Lara falls into a random pool of blood. There’s also dead bodies and guts just lying all over the island for little discernible reason… I guess because the bad guys are cultists and all religious people are mindlessly violent and irrational… *ahem* That said, the game didn’t really have any real reason to not get itself a Teen rating, because the gore that they threw into the game is just unnecessary. 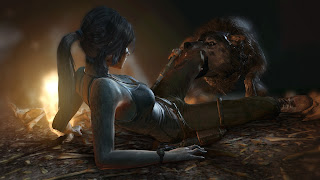 Even worse, the game is supposed to be about survival and makes a huge deal about having a hunting system, but it’s 100% optional – you get a bit of XP for killing animals and some salvage if you have an upgrade, but that’s it. Tomb Raider would have really benefited from a Metal Gear Solid 3-style survival system where you have to keep Lara from starving to death, and would have certainly helped make the game feel less linear than it is. A related issue is that you don’t even have to worry about non-human enemies, because the only ones that appear are a small group of wolves at the start of the game… and then that’s it. I never saw another wolf after the cultists showed up. That’s just a damn shame. Killing human enemies makes the game feel like another boring third-person shooter… 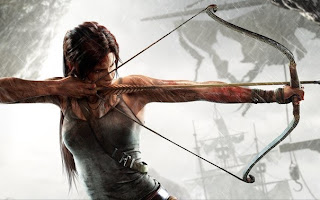 I guess the bottom-line is that Tomb Raider isn’t what I was hoping it would be. I was hoping for more of an emphasis on the survival aspect, but what I got instead was a game with great mechanics buried beneath an Uncharted-wannabe (oh the irony). That said, as the game progresses it becomes quite fun in spite of its shortcomings – I definitely was enjoying it by the end. However, I think the game would have benefited if it had cut the cultists entirely (or at least reduced their ranks significantly), emphasized player vs environment and survival gameplay and increased the number of puzzles. In fact, the puzzle-based sections were the highlights of the game. The Uncharted series has always struggled with its “puzzles”, which typically are insultingly easy, but Tomb Raider‘s puzzles are very fun to attempt. They’re not particularly difficult, but they are very satisfying to complete when you figure them out. Anyway, with those elements the game would have been much better – of course once you beat the game you can travel back to the hubs and do just that. Hmm… I might have to go back and go do some open-world tomb raiding unshackled from a mediocre third-person shooter narrative…

By the way, the next Retrospective series should be starting in about 2 or 3 weeks. I’ll be finished school on the 20th of August, and so will have more free time once again at that point – it was hell finishing the Resident Evil retrospectives and just finding time to write blog posts since the start of July when school started up again. That said, I’m really looking forward to writing about the next series – it’s a personal favourite, which should alleviate the negative feelings which tend to permeate the Retrospectives. Until next time then!