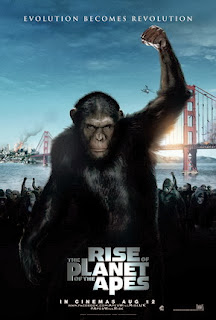 After Planet of the Apes became a go-to example of one of the worst remakes of all time, it seemed like the franchise was pretty much dead in the water. In spite of this public perception, around 2006 husband and wife screenwriters Rick Jaffa and Amanda Silver (what’s with these ape films and husband-wife screenwriting duos?) became interested in stories about pet chimpanzees. I can’t find a confirmation of this, but it’s very likely that one of these stories was that of Nim Chimpsky, an ape whose story is somewhat similar to that of Caesar in the final film. Whatever the case, Jaffa and Silver realized that the story they were formulating would fit into the Apes franchise quite well, and so wrote a script which they sold to Fox. While not officially a remake, the film plays out like a remake of Conquest of the Planet of the Apes on a very superficial level (in that it’s about the fall of humanity, brought about by an ape called Caesar who leads an ape uprising). That said, its themes of genetic engineering and human-ape interaction largely replace the revolutionary overtones and vengeance prevalent in Conquest. Early in development, the film was simply titled “Caesar”, which was the first I heard of the project. Considering that Conquest was my second favourite Apes movie, I was excited to see what they could do with the premise given a respectful budget to make it. However, the film seemed to have a bit of development trouble because Caesar was officially cancelled at one point before the project reemerged as Rise of the Apes (which was changed to the mouthful that is Rise of the Planet of the Apes because the studio was afraid people wouldn’t realize that it was an Apes movie otherwise).

Attached to direct was Rupert Wyatt whose only other directing credit was The Escapist in 2008, which had fairly positive reviews. For the visual effects, the producers decided that the apes were going to have to look like actual apes instead of the anthropomorphic ones which had populated the previous films. To accommodate this need, Weta Digital (the effects company behind The Lord of the Rings and the appropriately ape-centric King Kong remake) was brought in to do performance capture for the apes. Andy Serkis was also brought in to play Caesar, due to his unparalleled experience, mastery of motion capture and experience with playing an ape (again, King Kong). James Franco was also cast as Caesar’s owner, Will. When I heard all of this stuff for the first time, I was giddy with excitement: “A new apes movie with Andy Serkis, Weta Digital and Jame Franco? Holy crap it sounds like they’re actually trying this time!”

Unfortunately, as the release drew closer and closer, my optimism began to diminish. It started with the first trailer which, as this blogger sums up quite well, was not very good. The early marketing for the film just wasn’t good, focusing more on the action than the emotional core, and making it look like we were in for a disappointment. Then there was the title change and some mediocre posters which just further until I found myself approaching the film very cautiously leading up to release… 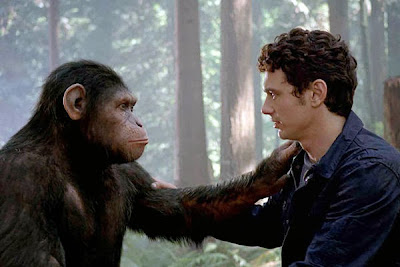 Rise follows a scientist named Will who is developing a serum to cure Alzheimer’s. After a lab accident in which Will’s reputation is shattered, he discovers that the child of a lab ape has had the serum passed on to him, which makes him incredibly intelligent. Will ends up raising the ape, dubbed Caesar, as if he were a human. However, as Caesar grows he finds that he doesn’t fit in with the humans and is eventually taken to a corrupt primate shelter. It is here that Caesar realizes that he has to do something to liberate the apes, sparking a revolution…

As you can probably see, Rise isn’t nearly as simplistic as many of the previous Apes films. It has a smart script with plenty of twists and turns, and one which is extremely relevant to modern audiences, much like the paranoia of nuclear annihilation would have resonated with fans of the original 1968 Apes. There’s also many genuinely affecting moments, such as when we discover that Will’s drive to cure Alzheimer’s stems from the fact that his father is succumbing to the disease. It’s pretty heartbreaking and turns Rise into something far beyond the stereotypical mad scientist trope. The “NO” scene is also incredible, and is easily going to go down as one of the most iconic sequences in the entire franchise. Simply put, Jaffa and Silver put together a fantastic script, and it really shows. 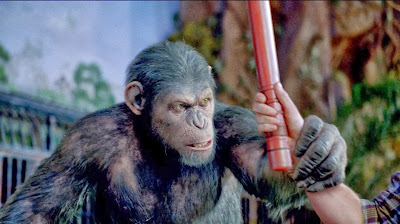 That said, there are some weak points in the story. Plenty of the characters are given very little depth or characterization. The douchebag neighbour and Will’s boss, Jacobs, are both completely one-dimensional (the neighbour’s always bitching at people and Jacobs is completely obsessed with making money). In both cases it works, but it’s unfortunate that they couldn’t have given them a bit more substance. They’re far from the only characters who suffer though – the staff of the ape shelter are all given nothing to work with, despite featuring Brian Cox and Tom Felton in their ranks. Probably the biggest disappointment in terms of character depth though would have to be Freida Pinto as the veterinarian, Caroline Aranha. Again, she isn’t given much material, being little more than a conscience and generic love interest (funny how we still can’t get past that trope 45 year later).

While many of the human characters are weak, the apes are far more interesting (this is probably intentional too, since the apes are the “heroes” of the story). Being the first apes movie with completely CGI apes, one could be forgiven for worrying that the effects may not be sufficient, but the special effects really are great. I’m worried that they might look kind of dated in 15 years, but if nothing else the facial expressions are spot-on. This is really a testament to the amazing mo-cap work of Weta and the actors, since the apes rely on facial expressions and gestures to convey their emotions (Wyatt “cheats” only on a couple occasions with subtitling, but generally he lets the audience figure things out for themselves). Caesar is brought to life fantastically by Andy Serkis, who I was hoping would win Best Supporting Actor in 2011 (he didn’t, sadly). We follow Caesar from his childhood innocence and see him grow into a capable leader, but we’re never really sure if he is going to go over the homicidal edge or not. The other apes are given recognizable characterization as well, and it’s impressive that we actually find ourselves caring for and cheering them on as the film progresses. Maurice is Caesar’s orangutan advisor, Rocket’s the former alpha male at the sanctuary who becomes one of Caesar’s most reliable followers and Buck is Caesar’s gorilla enforcer (it’s truly tragic when he gets gunned down). There’s also Koba, the long-time lab test subject who clearly has psychotic tendencies and wants to get revenge on the humans. 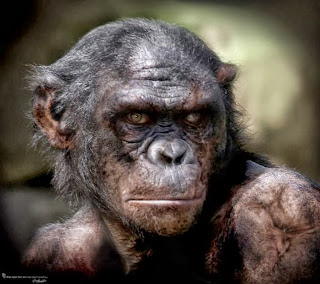 I’ve also got to give a shout-out to Rupert Wyatt who directs the film with real expertise. As I mentioned earlier, Wyatt elects to show, rather than tell, more often than not. This makes many of the film’s details into real heartbreaking moments, such as when we discover that Will’s father has Alzheimers (and when it returns as well). He also is very adept with action sequences, as the entire ape “revolution” is very exciting and funner than… well, a barrel of monkeys. He also manages to make an end credits sequence totally epic… how many movies can boast that!? Of course, Patrick Doyle’s score helps significantly as well, I really can’t stress enough how great it is.

That said, there is one aspect of Rise which bugs me more than any other, and that’s the sheer number of immersion-breaking references to the original film. Sure, a few call-backs are fun for fans of the franchise, but when it feels like entire plot points are only present to serve as a reference it gets a bit grating. For example, here’s a list of references I compiled while watching: the film opens with a hunt reminiscent to the famous human hunt, the intelligent apes are called “bright eyes” because their eyes have green flecks in them, Caesar is seen building a Statue of Liberty puzzle, Dodge yells “It’s a madhouse!”, the “damn dirty ape” line and sprays Caesar with a hose and one of the characters watches a Charlton Heston movie. If that wasn’t enough, the names of many of the characters are also references: the orangutan Maurice is named after Maurice Evans (who played Dr. Zaius), Dodge Landon is named after the other two astronauts who arrived with Colonel Taylor and Caesar’s (likely) future love interest is named Cornelia. At that point it’s just excessive and distracting, especially for someone like me who knows the original film inside and out. That said, it’s a relatively minor complaint overall. 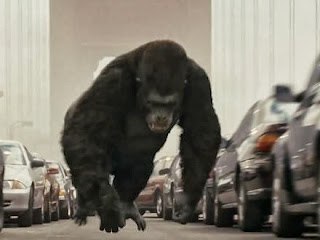 It should be pretty clear that I love Rise of the Planet of the Apes. It’s fantastic, I love it more every time I see it. It’s easily the best Apes movie since the original and hopefully bodes well for the franchise’s future. If you haven’t seen it yet then I heartily recommend that you do so immediately!

So how is the future of the Apes franchise looking? Well there’s a new film in the pipeline for a 2014 release called Dawn of the Planet of the Apes. Much like Rise is a loose remake of Conquest, Dawn looks like it will be a remake of Battle. Clearly there’s going to be conflict between Caesar and Koba, with Koba being a stand-in for General Aldo. Considering how clearly unhinged Koba was in his limited screen time in Rise, Dawn should feature some brutal showdowns between the warring factions. As bad as Battle was, this was largely due to its budget – with the proper budget that Dawn‘s getting, I’m totally stoked that it will be another awesome film. In fact, Dawn is up there with The Hobbit films as my most anticipated films. Sadly Rupert Wyatt isn’t back, but he’s been replaced with Matt Reeves (Cloverfield, Let Me In), which I have to admit might just be an improvement. With Weta and Andy Serkis back, plus a new cast featuring such famous actors as Gary Oldman (!) and Kerri Russell, it should be an amazing time. Plus Risehas left plenty of room for sequels – I almost wonder if Brian Cox was left with little to work with in order to bring him back in a sequel as a General Kolp analogue… not likely, but possible. Whatever the case, I’m happy that one of my favourite franchises is still going strong and looks to do so well into the future.

This is how I would rank the series from best to worst:

2. Rise of the Planet of the Apes

3. Escape from the Planet of the Apes(it’s a better film than Conquest, but they’re both about neck-and-neck for me)

4. Conquest of the Planet of the Apes

5. Beneath the Planet of the Apes

6. Battle for the Planet of the Apes(this and the remake are pretty much equally bad, it’s hard to objectively decide which I dislike more…)

Thanks for getting through this retrospective series and as always feel free to comment and give suggestions for future franchises for me to review!