Welcome back good readers to the beginning of a new retrospectives series! If you need to get caught up on the last series, then you can read about the Planet of the Apes franchise by clicking on the link. The series that we’re going to be focusing on for the next few weeks is the venerable Die Hard franchise. Since this is the first entry in this retrospective, we’re going to examine the one that started it all: 1988’s Die Hard. 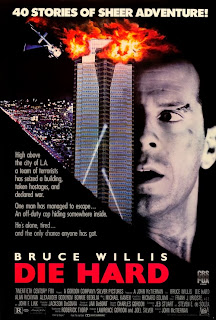 A bit of a mish-mash of design, but I like it. Classic.

Die Hard had a bit of a convoluted inception. In 1966, Roderick Thorp published a novel called The Detective, which was adapted to film in 1968 starring Frank Sinatra as detective Joseph Leland. Thorp’s novel attempted to pursue a more “adult” outlook on police work, depicting topics such as homosexuality, police politics and moral ambiguity. In 1979, Thorp wrote a sequel titled Nothing Lasts Forever, which saw the retired Leland trying to rescue his daughter from German terrorists who have seized control of the American Klaxon Oil Corporation building. The novel maintained the moral ambiguity and mature politics which had punctuated The Detective, but injected them with a good ol’ dose of ass kicking as well. When work started on adapting Nothing Lasts Forever to film, Frank Sinatra was contractually obligated to be offered the role (despite now being 73 years old). He turned it down, and so the producers attempted to retool the novel as the basis for another story.

After the success of Arnold Schwarzenegger’s Commando (the quintessential generic 80’s action movie), the retooled Nothing Lasts Forever was put forth as a potential sequel written by Steven de Souza and Frank Darabont. However, Schwarzenegger was uninterested in reprising his role and so the script was retooled yet again by de Souza, this time as a stand-alone movie called Die Hard. In spite of all the changes it had undergone, much of the details of Thorp’s original novel remain, including a number of the supporting characters’ names and the plot basics, as well as most of the key action sequences. However, by the time Die Hard was underway, most of the politics and moral ambiguity had been excised in favour of a fun actioner (in part because Fox saw the script as the basis of a summer blockbuster). 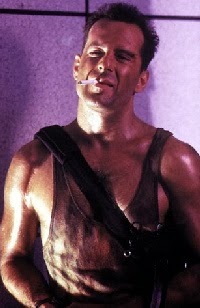 Many actors were approached to play the film’s lead, John McClane, including Sylvester Stallone, Harrison Ford, Don Johnson, Richard Gere, Clint Eastwood and Burt Reynolds, but they all turned it down. Apparently desperate to find someone to fill the role, Fox signed Bruce Willis for $5 million, a figure which was considered extremely high for a (at the time) low profile actor. Willis only had a single moderately successful film and TV show to his name at the time, and was seen as a comedic actor rather than an action star (oh the irony). Villain Hans Gruber was played by Alan Rickman, his first major film appearance. Also cast was McClane’s wife, Holly, played by Bonnie Bedelia. John McTiernan was brought on to direct, after having just completed Predator with producer Joel Silver. However, the script wasn’t entirely finished when things got underway, with entire scenes being added on after shooting started. Also surprisingly, McClane’s character wasn’t even figured out until half way through shooting, so reshoots of previous scenes had to be done to make him fit coherently. Fox rushing a major blockbuster through production to meet a release date? Never! 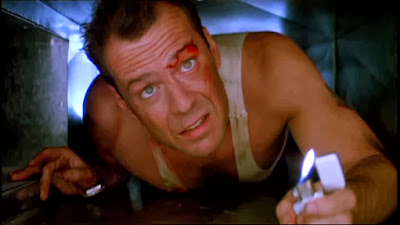 Luckily, Die Hard ended up being an extremely badass, financial and critical success of epic proportions. Seriously, who doesn’t like this movie? It’s one of my mother’s favourites, and she’s not exactly the sort who’s into uber-violent action movies. The film follows down on his luck NYPD cop, John McClane, who travels down to Los Angeles on Christmas Eve to try to reconcile with his estranged wife who has taken on an important job in the Nakatomi Corporation. During the Christmas party at Nakatomi Plaza, terrorists led by the evil genius, Hans Gruber, seize control of the building and set about orchestrating an elaborate heist. However, McClane slips away and then begins taking down the terrorists one at a time to try to save his wife and the hostages. If you haven’t seen the movie yet for some reason, suffice to say that the story is thrilling and revolutionary. The film is nothing like the typical 80’s Commando/Rambo-model where a single man marches into a military base and somehow manages to kill an entire private army with his machine gun. Instead, we get a single, desperate, ordinary man, a confined location, a finite number of villains and extremely high stakes which just keep mounting until the explosive climax. McClane spends half the movie in hiding, runs away in nearly every fight he gets in, gets badly wounded and improvises his way through situations. As a result, when McClane does get into a fight or goes on the offensive, it makes the film far more exciting and tense, because we don’t know what’s going to happen.

Bruce Willis must have been a revelation as John McClane – he’s fantastic and it really feels like he is an unhinged every man who is capable of becoming an ass-kicker in a pinch. Alan Rickman is also fantastic as Hans Gruber, and is easily the standout performance in the film. He’s mostly cool and collected in his performance, but there’s a palpable menace as well, especially when he discovers that McClane has stolen the detonators he needs to make his plan work. Of course, Bonnie Bedelia is also a convincing Holly Gennaro, displaying both fear at the situation, but a sense of strength and leadership for the hostages. Even the supporting characters are memorable. Everyone loves (or loves to hate) Al Powell, Argyle, Karl, the FBI agents Johnson and Johnson, Dwayne Robinson and Richard Thornburg. Hell, even each terrorist is given at least a couple lines and some screen time, making their eventual deaths have a bit more resonance than the faceless mooks that get gunned down in your typical action movie. The only annoying character is Ellis, although he’s supposed to be a douche bag, so he gets a pass. 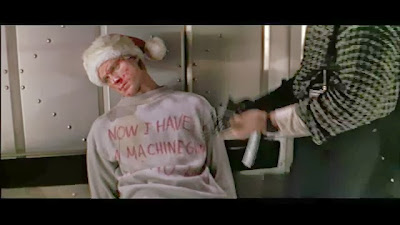 Also contributing to the movie’s success is its great sense of humour. Bruce Willis’ comedic past plays a part here, but there’s a lot of hilarious one-liners and sight gags which go a long way to making Die Hard a hell of a lot of fun. I’ve seen the movie at least a half dozen times now, but there’s still scenes which never fail to make me laugh out loud – the exasperated comment about ordering a pizza and the C4 down the elevator shaft especially…

Of course, the movie isn’t all just fun and games. There is actually quite a bit of social commentary present in the film. There’s the really overt messages about responsibility in news media, overbearing police and state authority interfering with saving lives and the government viewing its citizens as little more than statistics. However, there are less-obvious references which are there for people who want to look a little deeper. For one thing, Nakatomi Plaza itself represents the increasing globalization of industrialization which was occurring at the time of the film’s release. The film is also comments on second-wave feminism, embodied by Holly’s position in the Nakatomi Corporation and the cause of her estrangement from John. The only reason they had become separated was because she wanted to pursue her career, but John didn’t support her moving away to Los Angeles. During the course of the movie, John hates himself for being such an ass and wants to make amends. However, the status quo isn’t entirely rocked – at the conclusion, Holly reinforces that her name is “McClane”, not “Gennaro”, suggesting a level of macho backlash against feminism. That said, the film doesn’t become outright misogynistic or act as an anti-feminist parable, but there does seem to be a certain level of backlash present. 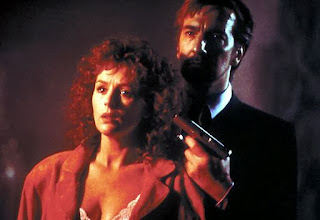 Anyway, there’s not all that much to say about it: Die Hard is an action classic. It revolutionized the genre, created its own sub-genre and started a franchise which continues to this day. If nothing else, it’s a kick-ass film in its own right. There’s a good chance you’ve already seen it, and if you haven’t then I heartily recommend that you do. Yippee ki yay indeed.

Be sure to come back soon for part 2 of this retrospective series with Die Hard 2: Die Harder!