Welcome back to the Die Hard retrospective! In this entry we’re going to cover the second entry in the franchise, Die Hard 2 (aka Die Harder). When Die Hard revolutionized the action genre and made a hefty profit, a sequel was an inevitability. Could Fox make lightning strike twice? Read on to find out… 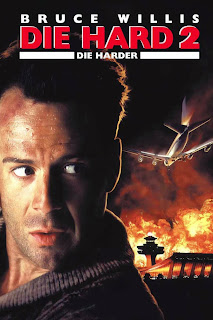 This poster’s much like the original Die Hard‘s, with a similar layout telling you pretty much everything you need to know. The whole “just like the original!” aspect is a bit of a trend though, as we’ll get into soon enough…

Soon after the success of Die Hard, production on a sequel began. Rather than write an original script, the producers decided once again to borrow from a pre-existing source. This time, the 1987 novel 58 Minutes by Walter Wager was selected, since it had a very Die Hard-esque premise. From what I understand, the novel and film are both fairly similar, with John McClane and a couple other characters being substituted or added in to please fans of the original film. Of course, Bruce Willis returns as John McClane. Bonnie Bedelia, William Atherton and Reginald VelJohnson also reprise their roles. Playing the leader of the terrorists was William Sadler (not a big name to us, although he has shown up in a variety of roles that you’ve probably seen him in, including The Shawshank Redemption, The Mist and Iron Man 3). Most of the rest of the cast are unnotable, although two of the minor terrorists would become known actors later: John Leguizamo (Sid in Ice Age) and Robert Patrick (T-1000 in Terminator 2… in fact, he’s badass enough in his 30 second screen time in this that it’s kind of distracting).

John McTiernan did not return to the director’s chair, going on to do The Hunt For Red October instead. Replacing McTiernan as director was Renny Harlin, who had achieved success with the well-received Nightmare on Elm Street 4: The Dream Master. The name sounded familiar to me, and that’s because Harlin was one of the many people who were brought in to direct Alien 3 – however, Fox passed on all of his ideas rather quickly, offering him Die Hard 2 instead. 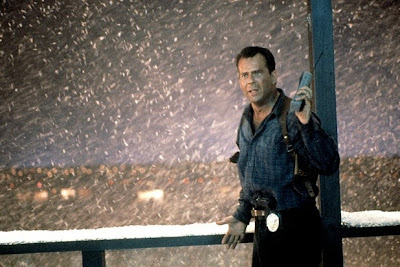 Exactly two years after the original film, John McClane’s waiting at Dulles Airport in Washington D.C. for his wife to arrive for Christmas Eve. Coinciding with this is the arrival of extradited South American drug trafficking general, Ramon Esperanza. A team of terrorists, led by rogue US Army colonel, Stuart, seize control of the air traffic control system, effectively holding all the planes in the airspace hostage unless Esperanza is set free. Of course, John McClane isn’t going to let a bunch of pansy-ass terrorists put his wife’s life get in danger. Pretty conventional set-up for a Die Hard movie… of course, that’s because the movie is pretty conventional itself.

Die Hard 2‘s script can be pretty convoluted at times and just doesn’t make a lick of sense when you put thought to it. The script is definitely the biggest issue in Die Hard 2 for a number of reasons. First of all, how can you justify the exact same situation happening to the same guy on the same day of the year twice? The movie tries to lampshade this by having John acknowledge it, but it’s still clear that they don’t bother to chalk it up to anything other than coincidence. Credibility get stretched even further by the fact that Holly and scumbag reporter Thornburg happen to end up on the same flight by mere chance, despite the fact that Thornburg has a court-ordered restraining order against her. Then there’s also the question of how the hell everyone keeps getting into the damn air control tower, although that’s a smaller “JUST BECAUSE!!!” issue in the grand scheme of things…

Then there’s just the fact that the plot isn’t paced very well. The opening scene doesn’t ease you into the plot, it plops you right into John’s shitty day. I almost wonder if the editors cut out a longer opening, because the opening scene just feels so stilted. Die Hard had a good 20 minutes of set up to get you up to speed on the situation and characters. Die Hard 2 has 3 1/2 minutes before the villains show up and start doing dastardly things. The first gunfight is only around 10 minutes in. Yet, in spite of all this, literally the first 30 minutes are incredibly dull to watch. The next hour has moments of interest, but the movie lacks a lot of the tension that the original had in spades. I mean, sure, there’s only 90 minues left til airplanes begin falling from the sky, but we rarely feel the urgency of this fact, in part due to the fact that everyone just sits around until John McClane decides to do something. Seriously, John McClane is apparently the only competent person in the whole airport – he must have run a few marathons over the course of the movie with all the footslogging he does while everyone else shoves their thumbs up their arses. It’s not until the last half hour that the movie finally starts to get legitimately fun, kicking off with a rather surprising (if cliche) twist and ending with an exciting, explosive climax. 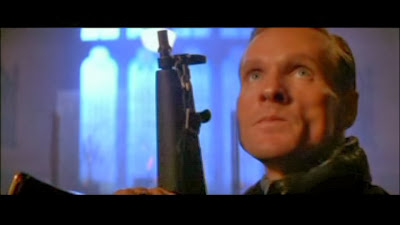 Then there’s the fact that the characters in this film just aren’t anywhere near as good as they were in Die Hard. John McClane stands head and shoulders above everyone else. Colonel Stuart’s not a bad villain, but he doesn’t hold a candle to Alan Rickman… plus he really doesn’t get all that much to do anyway. Bonnie Bedelia’s given a leading role in the film, but her contribution is minimal and it makes her role feel like little more than an over-glorified cameo. Then there’s airport security captain Lorenzo, whose only real job is to antagonize McClane incessantly, which gets grating quickly. Whereas the terrorists in Die Hard were all pretty distinguishable, the terrorists in this film all blend together (except for the aforementioned Robert Patrick, although that’s because he had an iconic role later in his career). Other than that, supporting characters such as Sam Colman (played by Sheila McCarthy, who fellow Canadians might recognize from Little Mosque on the Prairie) are basically useless and contribute practically nothing to the plot. The lines they get to spout aren’t that great either – Die Hard had some fantastic one-liners, but nearly every attempt at a one-liner in this film falls flat. For example:

McClane: Hey, Carmine, let me ask you something. What sets off the metal detectors first? The lead in your ass or the shit in your brains?

Umm, what? Does anyone know how that’s supposed to make any sense? I mean sure, it’s kind of insulting, but usually you want your insults to actually make sense…

Oh and I think I’d be remiss if I didn’t mention the incredibly random and awkward scene early in the movie where Colonel Stuart practices martial arts in his hotel room… in the buff. The whole point of the scene is to provide an exposition dump from a news reporter on the hotel TV, but it’s completely distracted by the fact that there’s a naked guy practicing punching people the whole time. If there was ever a movie scene that made me feel like a closeted homosexual, it’d probably be this one. Anyway, this scene also makes me wonder if Die Hard 2 beat Game of Thrones to the punch with the whole “sexposition” thing…

Sure I’ve beat up the plot quite a bit, but there is one legitimately surprising and ballsy moment in the movie when the terrorists decide to bring down one of the circling planes. It’s pretty disturbing to watch the people on board unwittingly head to their deaths while the air traffic controllers are helpless to stop them. The crash itself is pretty spectacular, although the size of the fireball’s probably excessive considering that the plane was “running on fumes”… but whatever, I can let a minor detail like that slide.

Then there’s the campy tone of the film. The original film was a lot of fun, but it tried to have a generally realistic tone. This film seems to play up the campy angle with a bunch of silly moments. For example, when a bad guy goes running away across the tarmac, McClane grabs a kiddy bike and chases after him. Then there’s the above screen grab, where McClane escapes the bad guys by firing an ejector seat just before the plane blows up. Just from the way it’s shot, it comes across as being an extremely silly moment. Everyone has an infinity bandana too, because the number of shots that come out of the characters’ single clips is just ridiculous.

Overall, I’ve been ragging on Die Hard 2 quite a bit, because it really does have a lot of problems and is clearly inferior to the original film. However, it is a fairly fun movie, which exonerates it to a point. That said, it’s basically just a generic, mindless action movie hardly befitting a sequel to one of the greatest action movies of all time.

Be sure to come back soon for part 3 of this retrospective series with Die Hard with a Vengeance.