If you’ve read any of my reviews or retrospectives, you’ll probably notice that I have an interest in the design of film posters. As a result of this interest, I decided to put together a list of the best movie posters of the year. I’ve been collecting cool posters for months now and have had to do my best to whittle down this list to an acceptable number. In the future, I might turn this into a seasonal column, but for now enjoy my favourite movie posters of the year 2013!

Note: This list only encompasses films released in 2013, although some of the independent films may have been given a variety of earlier releases as well. So, as much as I want to put this amazing Godzilla poster on the list, I’ll have to wait til next year. Films with a few notable posters have been grouped together. Also, click on any of the posters for a larger resolution image (otherwise this entry will be too damn long).

Honourable Mentions:
I had a pretty long list of posters for this list, so naturally not all of them made the cut for one reason or another: maybe they were only a special issue poster or a cool design that doesn’t really do much to sell me on the movie. Maybe it was just not good enough to crack the top 10. Whatever the case, these are the posters that didn’t make the list, but that I felt deserved some recognition. 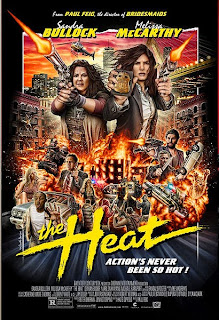 I never saw this movie because, frankly, it looked a) like the very definition of a generic buddy cop comedy and b) really bad. However, if they had based the entire marketing campaign on Struzan-esque posters like this, I might have been first in line. Unfortunately, the rest of the marketing campaign relied on gluing glasses to Sandra Bullock and trying to make Melissa McCarthy go through lipsuction. 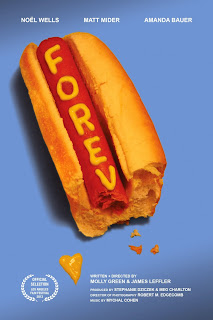 I thought this one was just cute, although it doesn’t really tell me anything about the film. It’s definitely indie, maybe it’s quirky too, and there’s about a 25% chance of hot dogs being involved somewhere in there. Still, very clever design work went into this one. 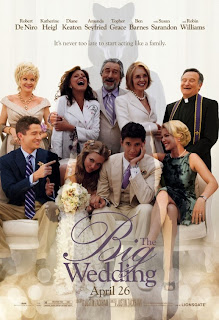 This one makes the list for its unconventional tactics. No, not The Big Wedding, look closer. This is actually a poster for You’re Next, slipping a masked killer into the reflection (these were originally placed inside of bus stops… which is just awesome). Probably too subtle, but still a clever marketing tactic (and one which further ensures that You’re Next is gonna be in my blu-ray collection soon).

10) The Hunger Games: Catching Fire
Admittedly I mostly picked these because of Jena Malone and Jennifer Lawrence, but the posters do a good job of establishing the characters and “epic” scale of the Hunger Games franchise. The one of Katniss in particular has very interesting colour grading, making it almost appear… dated in a sense. In any case, it’s very well-composed and visually stunning. As for the one of Johanna, it does a good job of setting up this character as someone you don’t want to mess with, largely due to Jena Malone’s icy stare. The stunning subjects of these two posters really go a long way to cementing their exemplary quality. 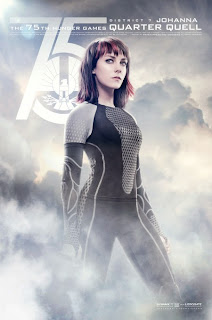 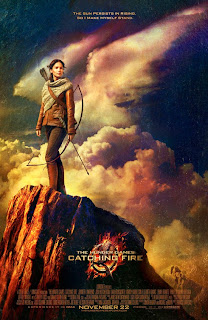 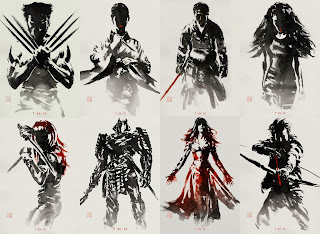 The Wolverine was a pretty mediocre film, but the posters marketing it were nearly all amazing. The high contrast water colour paintings of the characters are stunning and really helped to set this film apart from other super hero flicks which were going for flashy style over substance. Too bad the film couldn’t have been this artsy… hell, if they made an animated Wolverine in this style, it would be gorgeous.
8) Mr. Jones 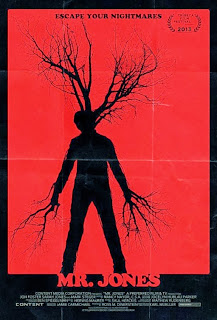 WTF? Nightmares indeed. I have no idea what this movie is about, but the poster is disturbing enough by itself. For some reason, I imagine the film itself isn’t about how the ents get revenge on us, but I would bet that the movie is pretty harrowing.
7) World War Z 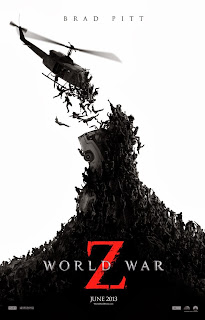 Much like The Wolverine, the black and white style really makes this poster standout. The fact that this scene is actually in the movie adds to World War Z‘s favour though. The poster promises an epic, blockbuster scale and that it will be unique – a feature which is crucial in a time in which we are exhausted with zombies. Of course, the movie ended up sucking, but at least the poster was awesome.
6) Machete Kills
Machete Kills was simultaneously exactly what I expected and very disappointing. It was incoherent and bloated, but it gained a lot of points in my book for how ridiculous it was – a feature highlighted very early by the marketing for the film. The poster of Sophia Vergara with the minigun brazier is hilarious and awesome and basically single-handedly won my ticket. The Lady Gaga poster is very intriguing as well. For one thing, I really don’t like Lady Gaga, but the poster does a fantastic job of portraying her as both exotic and intriguing. If only they had integrated her into the film more naturally, it may not have been for naught… 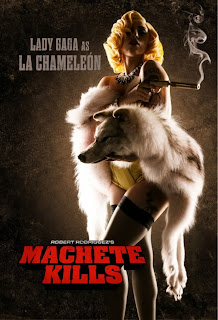 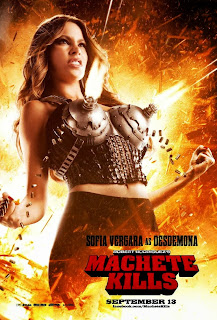 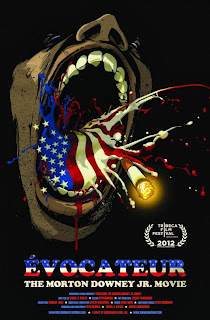 Like quite a few films on this list, I have no idea what this movie is about, but isn’t this poster a thing of beauty? Based on the poster, I would assume it has something to do with racial conflict in America. 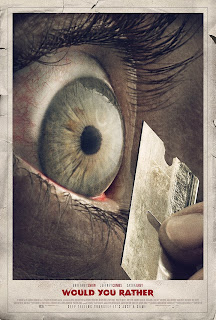 OUCH OUCH OUCH OUCH OUCH. NO. I can pretty much guarantee the movie isn’t nearly as harrowing as this poster is. Gah, just the thought of sticking a blade near my eye like that just freaks me out. If I was caught in the Death Mask trap from Saw II and the only way I could live was to cut my eye out, I’d just sit down and die. Suffice to say, this movie poster gives me the heeby-jeebies and just makes me think of all the other sick stuff the filmmakers might have put into a film with this title. 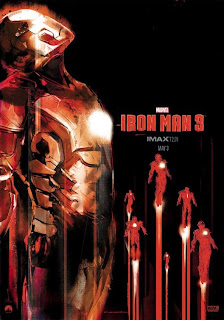 It takes a lot for a second sequel to cause excitement, especially after following up after a really poor first sequel (Iron Man 2, obviously) and a really good spin-off of unprecedented proportions (The Avengers, obviously). The marketing for Iron Man 3 lives up to this task, showing us a vulnerable Tony Stark who somehow has to get out of what is clearly an extremely deadly situation which one-ups the alien invasion storyline of The Avengers. The poster featuring the stylized Iron Man suits is also noteworthy for its very cool-looking design. For some reason, it makes me think of anime/manga art. 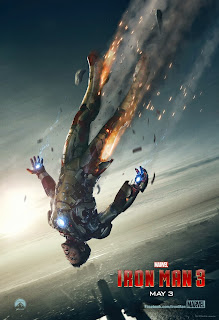 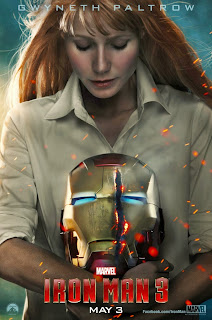 2) Gangster Squad
Gangster Squad had some truly exceptional posters perfectly capturing the spirit of pulp/noir gangster films. A lot of props have to go to the fact that Emma Stone is absolutely stunning in that red dress (hell, she carries her own poster and sells the film on that fact). Of course, the movie was an enormous disappointment, but between the trailers and the posters, the marketing for the film was undeniably brilliant. 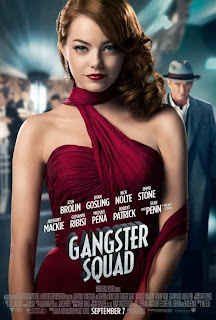 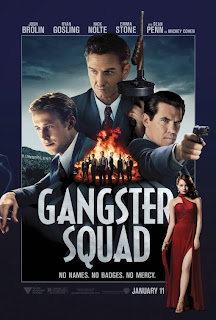 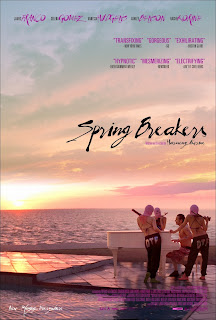 This poster (the one on the right) is just brilliant. It looks pretty serene at first, like a still from an inspirational drama or a chick flick. Oh look, it’s a dude playing piano and serenading a trio of bikini-clad women in front of a gorgeous sunset. It’s covered in a girly purple font. It almost looks like a perfume/cologne ad. However, it also manages to be subtly unsettling. What’s up with the horror-esque font on the title and credits? And then you notice the girls surrounding the pianist are wearing ski masks and slinging rifles. Is this pianist just crazy or are the girls going to kill him if he doesn’t play? When you look past the very basics of this poster, it gets really intriguing. I haven’t seen Spring Breakers, but from what I understand of it, the poster captures the dichotomy of beauty and the threat of violence which really runs through the film.

Also of note are the less-artsy posters which made up the bulk of the film’s marketing – they capitalize on pastel colours and sex, which might be selling the film a little deceptively but at least the posters look good. I chose to show the Ashley Benson poster because it single-handedly put her on my radar, haha. 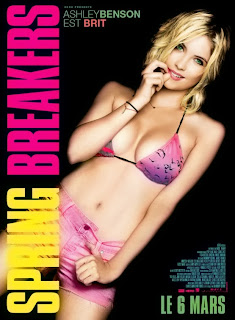 And there you have it – my favourite film posters of 2013. I think I’ll turn this into a regular column on this blog so be sure to come back for more in the near future! And be sure to add your favourite past and upcoming posters in the comments section below.
Please follow and like us: