(NOTE: I’m going to be super busy this week so I’m going to hold off from updating the playlist until next week hopefully)

Harkening back to the origins of this blog, back when its focus was mainly on pop culture rather than Christian/social issues/current events, I’m going to put out a long-overdue video game review about 2014’s survival-horror game, Alien Isolation. As you might be aware, I’m quite a big fan of the Alien series, and would count the first 2 films in the franchise amongst my all-time favourite movies ever. As a result, the prospect of being stalked constantly by one of these killer rape-beasts left me extremely excited to try out the final product. So how did the game measure up? Read on to find out… (and as a warning, there will be some spoilers.) 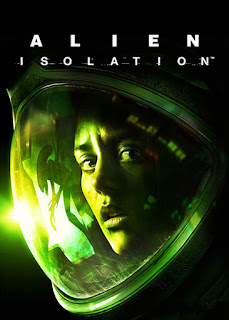 Alien Isolation stars Amanda Ripley, daughter of Ellen Ripley, as she travels to the run-down space station Sevastapol in search of the flight recorder for the doomed ship, Nostromo… and, uh, well that’s basically the entire plot summed up right there. Don’t get me wrong, there are obviously plot points that go beyond that, but the plot was sadly not all that memorable. Even worse, most of the stuff that you’re tasked with doing in the game has basically no bearing on the main plot, so it’s really easy to forget what the hell is actually going on, or why it matters, at any point in time. Oh, and the ending is freaking awful. 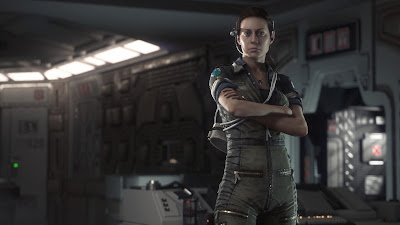 That said, Amanda Ripley is quite a good protagonist. She is very capable and brave, even if she is in way over her head and is no match for the foes all coming after her. It’s refreshingly positive to see a strong female character in a big game like this too, so major props to Sega and The Creative Assembly for that. Again though, the plot doesn’t give her much room to develop, outside of just going and performing tasks, so that’s unfortunate. Still, she gets a better shake than the rest of the cast, who are completely forgettable.

Of course, you’re probably not coming to Alien Isolation for the plot, you’re here for the antagonist, the scares and the gameplay. First off, I have to say that the alien is consistently terrifying. For the first few hours, every time you see the alien you’re going to squeal in terror and want to shit your pants. Even later in the game, when you’re starting to get used to the alien’s movements and have some methods to defend yourself, the alien can still catch you off guard and scare the crap out of you. The alien’s dynamic AI keeps it from getting too predictable and keeps alien encounters very tense. The game seems to “cheat” sometimes though – at a couple points in the game, it seems like there is a certain amount of rubber-banding with the alien, where you can’t leave an area without having the alien be forced to follow you around despite not even knowing that you’re there. It can also be really frustrating when you wait for the alien to buzz off somewhere, wait until it’s safe to leave a room and suddenly find yourself face-to-face with the alien out of nowhere, leading to a quick respawn back to the last save point. These moments can be extremely frustrating, but there’s enough unpredictability and tension in alien encounters to keep the game engaging and interesting. 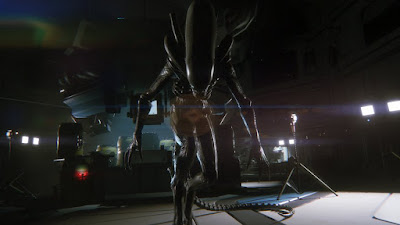 The alien isn’t the only enemy on the station though. The there are human looters aboard the station who will shoot on sight. You only run into them a handful of times thankfully (this isn’t the sort of game that needs to turn into a shooter), but they are typically pretty interesting moments when you do. This is mostly because confrontation is basically impossible – while you do get a revolver early on, the shooting in the game is very difficult and unreliable… and gunfire typically attracts the alien, so it is very much discouraged. The nice thing about human encounters is that you can either sneak past them very carefully, or you can lure the alien in to kill them all for you, giving you a clear path to escape. The only real issue I have with the human enemies is that their AI can be kind of stupid. At one point, I opened a door and had 2 humans look right at me, but they didn’t even see me. I threw a noisemaker in the corner to distract them and just snuck around without them even having a clue I was there. I don’t know if their vision cones are just embarrassingly small or what, but there are lots of moments where you think a human should be able to see you, but don’t.

The other main enemy type in the game are the Seegson androids which populate the station. They are moderately unsettling the first few times you see them, but I quickly got tired of fighting these enemies (which sucks, because you’re going to fight A LOT of them, and there’s a fairly large chunk of the game where the alien disappears and you have to fight androids exclusively). Their AI is even stupider and more inconsistent than the humans’, and their grab animations are annoyingly long (probably around 10 seconds… and you’re going to be seeing it quite often). The only good thing about androids is that they give you an excuse to use some of your weapons which are useless against the alien (eg, shotgun and stun baton) or overkill versus humans (eg, bolt gun), but this doesn’t really make up for the frustration. 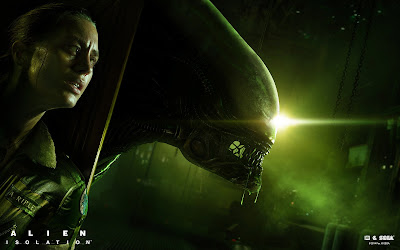 The gameplay itself generally revolves around trying to get from point A to point B without being spotted (at which point you will usually die). The maps are generally have a few different ways to get to your destination, opening things up for player choice – do you risk the most direct path, or do you take the safer path along the perimeter where you have more hiding places? The game features a The Last of Us-style improvised crafting system, which can be helpful and encourages risk-taking as you try to find parts. Unfortunately, as with all of these survival games with crafting, if you play like me then you’re going to find yourself stockpiling these scarce items on the off chance that you might need them someday, and never end up trying them out. I don’t think I ever even used two of the strongest items, the EMP mine and the pipe bomb, just because I was worried that I might need them later and wouldn’t have the parts to build new ones. This isn’t a major issue by any means, but it is an annoying aspect of this kind of game. The game also features an old-school save system where you have to reach a save point in order to get a checkpoint. This system can lead to some major frustration at times, but I personally found this to be a great system for this sort of game. The threat of dying becomes even more terrifying and it keeps you playing carefully to avoid the harsh penalties of failure. 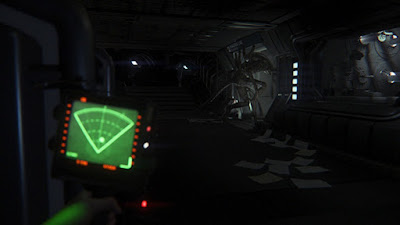 To help you when you’re being hunted by the alien, the game gives you a motion tracker early on, and this is arguably the most useful tool in your arsenal. The motion tracker is basically essential to survive, and features an objective compass as well, which is good because it is easy to get lost (especially since the narrative is so unhelpful about what you need to do). You can’t rely on it too much (it gives a lot of useless readings and doesn’t work in air vents, so you have to rely on audio cues just as much), but it is really handy and makes the game fairer. At around the halfway point in the game though, you get a flamethrower which arguably breaks the game from there onwards. As soon as you get the flamethrower, alien encounters become significantly easier and less tense, as you can whip out the weapon and fire a couple bursts to keep the alien from attacking you. You still have to avoid combat as much as possible, since fuel consumption is a major concern, but by that point in the game you should be adept enough at facing aliens that they no longer become nearly as terrifying (except when they catch you off guard, at which point you’ll squeal like a pig all over again). 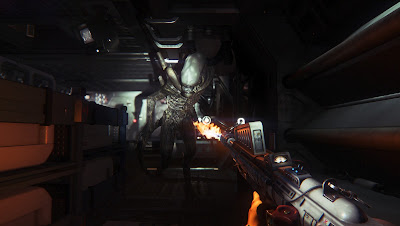 Also worth mentioning is the game’s fantastic environmental work and sound design. Sevastapol looks incredible, fitting the retro-future aesthetic of the first film perfectly (something which Prometheus should have taken a cue from). The game just looks so good that you’re almost tempted to wander around and check out all the cool little details of the world. The sound design is also really crucial to the game’s world. Sometimes the only way to know if it’s safe is to hear the tell-tale sound of the alien heading into an air duct, or clench your asshole in terror as you hear it dropping down from a duct or screaming as it barrels right at you. I don’t know how many times I jumped just from walking past one of those creepy air duct entrances, which make a jarring sound of metal scraping against metal. Arguably the scariest moment in the game for me was when I was hiding and listening for the alien in the corner of a pitch black air duct, not daring to turn on my flashlight for fear that the alien will see it and come find me (it did, and I yelled “SHIT” loud enough that probably everyone in the house heard me).

I have touched on the good and the bad of Alien Isolation so far, but I think the absolute worst issue in the game is that it’s just too damn long. Playing on hard mode, the game probably took me at least 22 hours to complete, which is just insane for this kind of game. It would be one thing if the game managed to stay fresh throughout this playtime, but unfortunately Alien Isolation starts to outstay its welcome very quickly and features a ridiculous amount of padding. Most of the complaints I have had thus far are quite minor, and can easily be ignored if the rest of the game is strong enough. However, the long playtime just services to exacerbate all of the issues with the game – fetch quests and point-A-to-point-B gameplay become stale very quickly, hours of the game get dedicated to just fighting waves of androids (which are now immune to your stun baton…), and the plot just becomes utter background noise. Hell, even the game’s strengths start to lose their lustre. The environments start to bleed together through asset reusual and the alien gets annoying very quickly because it won’t leave you alone long enough to finish your already-unfun objectives.

If they had cut the game’s length in half and focused about half-to-two-thirds of the game towards alien encounters, the game would have been a hell of a lot more enjoyable. As it is, it’s an utter slog and a chore… which is too bad, because there are a lot of things to like about it, buried beneath all of that. Unfortunately, I’m going to have to give the first person survival-horror crown to Outlast, a game which knew damn well not to outstay its welcome and was all the better for it. If there is an Alien Isolation 2 though, I really hope that The Creative Assembly can work out the issues with this one and make a better experience.