Happy Easter everyone! Unlike Christmas, Easter seems to be that holiday which Christian conservatives don’t seem to shove the “true meaning” of into our faces incessantly, for whatever reason. Of course, to pick up the slack, the neo-pagans have to get their word in: 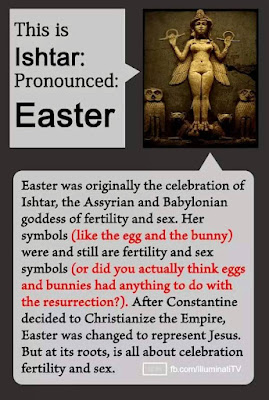 Sigh… I know there’s a common conception that religious people are anti-intellectual and can’t accept facts, but it can be easy to forget that if you’re going to be pushing for paganism or atheism, then you have to do a quick Snopes check first. Beyond that, I think every Christian who celebrates Easter goes “why the hell do we symbolize this celebration with eggs and rabbits?”, it’s not like they thought that there was an actual religious significance to it.

There’s a similar vein running with that long-debunked nonsense that the gospels are ripped off from the mythology of Horus (or Mithras, or various other pagan gods depending on who is telling the tale this time). That is, of course, the problem with the Internet and the spreading of disinformation. If you’ve never watched CGP Grey’s “This Video Will Make You Angry”, then I would definitely recommend it as it explains the psychology of Internet communities and outrage culture extremely effectively.

The mention of Constantine was also rather interesting in that meme, as neo-pagans seem to have a really odd fixation on him: 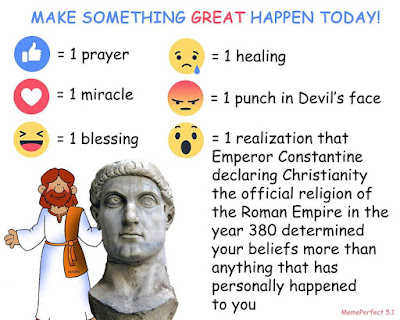 Perhaps neo-pagans are salty about Constantine effectively ushering in the end of the biggest pagan empire? Do they wish that the modern world’s religious demographics were overwhelmingly pagan (after all, no Christianity also means that Islam would be non-existent or wildly different, effectively eliminating 2/3 of the current world’s religious allegiance)? Do they long for a day where the social conservatives are harping on about “In gods we trust!” and marginalizing those weird monotheistic Christian people which are popular amongst filthy hippies? I can’t help but feel that this line of thinking would be rather… vindictive and petty. 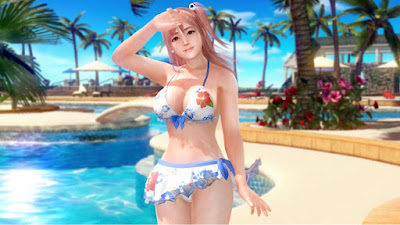 On a completely different topic, I put out a pair of posts a few months ago responding to the idiotic Dead or Alive Xtreme 3 “controversy” drummed up by people who freak out whenever someone says “SJW” (hmm… on second thought, this ties into “This Video Will Make You Angry” perfectly… seriously, watch it). Well the game is finally out and PlayAsia’s ploy seems to have worked well, as they’re raking in the cash importing copies of the game overseas to silly dumbasses who still think that us SJWs will give a shit.

I can guarantee you that DOAX3 is not worth your outrage. I seriously question how many of these angry people have actually played a DOAX game, because they are utter shit. For a laugh, I tried out Dead or Alive Paradise, and it was absolutely wretched. If all you wanted to do is oogle girls in bikinis, you should realize that that is barely a feature in the game. Most of what you do is boring menu-based busywork until you decide to play a minigame for about 30 seconds. It has more in common with dating games than you would expect. Now obviously there is a certain niche market for that kind of game, which is fine, but I doubt that they’re the ones doing the bulk of the complaining here. The extremely creepy tone and general pervy-ness are just a veneer over a husk of a game which very quickly goes sour. […]

Well the reviews are in and from what I have read, DOAX3 is actually even more threadbare than previous entries in the franchise, having removed multiplayer, some of the mini-games and not making any real improvements on the stuff that stayed in (including apparent lag input on the pool hopping which existed in previous DOAX games, which rendered that activity practically unplayable). Of course, the graphics and physics have been praised, as they should be since that’s obviously where all the effort went. Reviews have been arguably somewhat harsh (although some are ridiculously easy on the game), but the overall feeling seems to be that, at best, the game is incredibly niche. I’m extremely curious to see how many of the people who were whining during the controversy will pick this up, play for about 15 minutes and then go “wait, that’s it?!” Considering that the people who complain about SJWs in gaming are also typically the “real true hardcore gamer” crowd, I can’t see them getting much joy out of DOAX3. 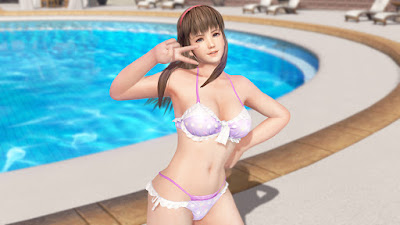 Oh and if that wasn’t enough, the game is actually even more cynically exploitative than even I was expecting:

Koei-Tecmo have demonstrated through DOA5:LR that DOAX3 is going to be packed full of many of the corporate practices that gamers have been rallying against for years now. If your favourite part of the old DOAX games was unlocking all the skimpy bikinis then prepare to be disappointed – DOAX3 is going to be a DLC factory. […] Oh, and all of those characters who failed to make the cut for the game, including such main characters as Tina Armstrong and Lei Fang? They’ll almost certainly be added in as DLC in the future as well.

While bikini DLC is still up in the air (at present there is only 1 in the store, but it seems like a 100% certainty that more will be added shortly) and upcoming DLC characters have been teased, I was not expecting Koei-Tecmo to introduce freaking microtransactions to the game. Apparently the game becomes a tedious grindfest as you do the same shallow mini-games over and over again to try to unlock anything worthwhile… unless you decide to spend real-world money (in a game which is already a full-priced release mind you), ranging from $6 to a whopping $190!!!! Just… why? You guys know that Youtube and Rule34 are things right? You don’t need to buy this game to experience it, and Koei Tecmo certainly doesn’t deserve to succeed with this game. As for you Team Ninja… can we just get Ninja Gaiden 4, please? At least make it better than Ninja Gaiden 3 and Yaiba: Ninja Gaiden Z, and I’ll be happy.

We get what we deserve, I guess. Sigh.