Holy shit, surprise, it’s another Retrospective series! I honestly wasn’t expecting to do another one of these, since they tend to take quite a bit of time, work and effort to put out to a level I’m happy with. That said, I was thinking back on the Jurassic Park film franchise just the other day and it was making me think of how interesting this series’ journey has been, which started giving me that writer’s itch. And so, let’s launch into this with the first entry in the series, 1993’s Jurassic Park… 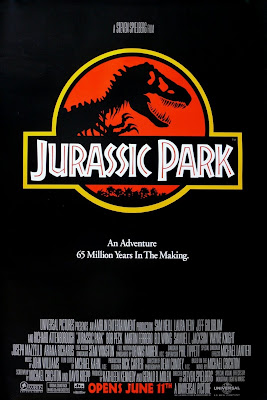 Pretty much the definition of an iconic poster. Simple, but so evocative. In fact, it’s so iconic that every subsequent poster in the series has aped it wholesale.

Normally I beat around the bush and try to act coy about what my overall thoughts on a film are in one of these reviews. I’m not even going to bother with that pretense here – Jurassic Park is a bloody classic. You know it and I know it too. I mention that up-front because it’s relevant to note that the film is based on the Michael Crichton novel of the same name which, somehow, is even better than the movie in my opinion. The novel hits most of the same beats as the film, although basically every scene or character is different in some manner. Some particularly fun examples of differences from the original novel are that the lawyer, Donald Gennaro, was originally written as a muscle-bound badass who punches a velociraptor in the face when it bites him in the arm, John Hammond is originally a petulant and unrepentant corporate villain, and that the big climax with the raptors involves far more of the creatures on the loose which the heroes end up having to fight with freaking rocket launchers. In addition, the novel has much more detailed discussions about chaos theory, while also fitting in so many action sequences that the novel would still be plundered for inspiration in the next 2 sequels. The novel is also notably far more violent, with scenes including such gory imagery as babies being eaten in their cribs, men being disemboweled and eaten alive and dinosaurs getting blown in half. I actually wrote a paper in 12th grade about all the differences between the film and novel and the only element which survives basically intact is Denis Nedry’s character, who is just as much of a slobbish buffoon in both mediums.

Anyway, before the novel was even published, Crichton and Steven Spielberg were in talks about the premise, which Spielberg thought was fascinating. A bidding war between 4 studios broke out, but Spielberg and Universal won it and got underway producing the film. Notably, Spielberg wanted to make Schindler’s List, which would be funded after he directed Jurassic Park. Basically, in the year 1993, Spielberg ended up putting out 2 of the best movies in their respective genres because the man is just that much of a legend.

Also key to the film’s success were its ground-breaking special effects work led by Stan Winston (of Aliens, Predator and Terminator fame) and Phil Tippett (who did stop-motion effects on Star Wars and RoboCop). Originally the dinosaurs were going to be achieved through a mixture of animatronics and stop motion, but Spielberg found the stop-motion effects to be unsatisfactory. Dennis Muren of Industrial Light and Magic claimed that they could use computer generated imagery to achieve the desired effects, which he demonstrated with footage that would form the basis of the scene of the T-Rex chasing Gallimimus (which prompted this exchange immortalized in the film: “When Spielberg and Tippett saw an animatic of the T. rex chasing a herd of Gallimimus, Spielberg said, ‘You’re out of a job,’ to which Tippett replied, ‘Don’t you mean extinct?’“). The CGI tends to get all of the praise, but most of the dinosaurs in Jurassic Park are actually brought to life with puppetry and animatronics, which are all top-notch and help to make the effects work even more impressive and life-like. That said, the CGI is often heralded for being better than anything that gets put out today, which is definitely a stretch. It is usually quite good, shockingly so for 1993 special effects, but you can often tell when CGI is being used and when animatronics are. In fact, at times the CGI is just straight-up poor, most notably in the “big reveal” scene where Alan Grant sees the brachiosaurus for the first time, and we end up seeing this unconvincingly-textured behemoth marching across the land. That’s actually rather unfortunate because it dilutes the impact of the scene a bit, although it would have been mind-blowing in 1993. Thankfully, CGI is never over-utilized, only being relied on when it is needed. 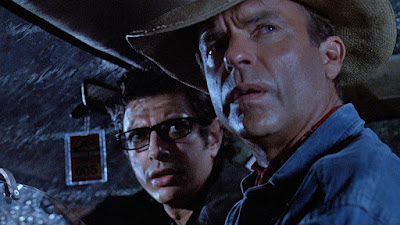 Jurassic Park is also gifted with a very talented cast, none of which puts in a poor performance.* Jeff Goldblum’s character, Ian Malcolm, is the clear standout just by virtue of Jeff Goldblum playing his usual brand of eccentricity, but he’s only a bit more entertaining than Sam Neil and Richard Attenborough’s characters. Hell, even the bit parts are intensely watchable, from Bob Peck’s badass game warden Robert Muldoon, to Wayne Knight’s bufoonish villain Denis Nedry, to Samuel L. Jackson’s sarcastic Ray Arnold. As I wrote earlier, nearly every character differs from their book counterparts, but the changes to John Hammond are the most impactful on the plot. Taking him from being a curmudgeonly and greedy bastard to a well-meaning, enthusiastic entrepreneur lends the film an air of tragedy, most keenly felt in the scene when he bemuses on his past with Ellie Sadler (capped perfectly with a heart-breaking reading of his signature line, “spared no expense”).

The very first thing that strikes you about Jurassic Park is John Williams’ score, which sets the tone perfectly. It puts you on edge when it needs to and swells you to excitement at the perfect times. When I was writing my notes while watching the film, literally my very first one was “Immediately, oh God the music”. Tying into this feature, the script and Spielberg’s direction build so much suspense that any sort of comprehensive list would just be a plot summary. That said, the t-rex attack is probably the textbook, standout example of how to build suspense in a major action sequence.

Jurassic Park is a film of two halves. The first half is used to establish the setting and plot, begin building up suspense, and (primarily) to provide the audience with speculative wonder and adventure. This emphasis on wonder actually makes the second half more impactful, because we get to see how amazing this island is and the creatures which inhabit it. It’s very easy to get caught up in John Hammond’s own enthusiasm for the park and root for its success in spite of any concerns of its safety, particularly during the “Mr. DNA” scene (which also happens to be an ingenious way to explain the admittedly ponderous scientific elements of the book in a quick and palatable way). Even when the film shifts from adventure into an action and horror in the second half, the sense of inherent wonder at this island still lingers at times, such as when Grant, Lex and Tim take shelter in a tree and witness a herd of brachiosaur feeding. 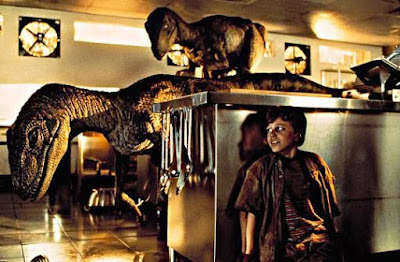 The second half of the film is where things go pear-shaped for the characters and all of the suspense that has been building up boils over into basically non-stop action-horror for the next hour. The survival-based half of the film seems to have been the main thing which has been seized-upon with subsequent Jurassic Park films, rather than the sense of wonder which sets this film apart so much from its sequels (not to get too ahead of myself, but Ian Malcolm lampshades the plot structure himself in The Lost World when he says “Oh, yeah. ‘Oooh, ahhh,’ that’s how it always starts. Then later there’s running and um, screaming”). This is notable because one of the most common complaints about Jurassic Park is that after the first hour, the characters basically spend the rest of the movie running away from dinosaurs rather than being developed. Only Grant and Hammond learn some small lessons in this whole time, but otherwise you could swap nearly any character out for another without impacting the plot any as everyone’s just running and reacting to the dinosaurs hunting them. That said, I don’t feel like Jurassic Park truly suffers because of this – it’s a notable weakness, but luckily the characters were already established well in the preceding hour and given distinct and likeable personalities, so we still care about them when the film isn’t giving us more reason to.

Other than that, I can only point out a couple other weak points with the film, but they’re really nitpicky. One would be the kids, Lex and Tim, who are basically just burdens. They do have thematic significance (helping to develop Grant’s character), provide some additional wonder and Lex manages to get the security system working again briefly, but otherwise they can be a bit of an annoyance and would begin the “obligatory child character” trope which would plague the series going forward. I also am mixed on the t-rex’s vision, which Grant conveniently knows is based on movement. On the one hand, it provides some more tension, but it’s also super convenient and largely ignored in any subsequent film (Crichton’s sequel novel even tries to retcon it out in very clumsy fashion). There are also some mise-en-scene issues with the cliff suddenly appearing in the t-rex paddock, but this could just be down to poor explanation of spacing, plus the film does a good job of making you not notice this anyway. Other than that, it’s kind of silly that the wrecked car chases the characters down the tree, but again… nitpicks. This movie freaking rocks, is a defining film from my childhood and is definitely amongst my favourite films of all-time. It’s a classic, no question.

Be sure to tune in soon for the next entry in this series, The Lost World: Jurassic Park!

*In fact, literally the only performance in the film which I would classify as “poor” is Gerald Molen, who plays Dr. Harding (aka, the guy who is looking after the sick triceratops). This is probably because he’s actually more of a producer rather than an actor who… wait… he produced 2016: Obama’s America? What the hell!?! Ugh, well now I’m going to cringe twice as hard every time he says, in response to the triceratops’ pupils being dilated, “They are? Well I’ll be damned!”
Please follow and like us: