Lately I have been reading Richard Beck’s We Believe the Children: A Moral Panic in the 1980s, a very interesting tale of the social and political attitudes which helped to foster the 1980s “Satanic Panic” regarding daycares being places of ritual satanic sexual abuse. Thankfully our society is so far beyond such ridiculous hysteria, but there is a through-line in the narrative which has been making me slightly uneasy about the way that #MeToo has been progressing, especially after the backlash faced by Margaret Atwood after she made a cautionary op-ed about the movement. 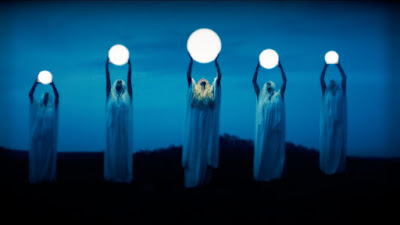 To put it simply, the title of We Believe the Children shows the philosophy which was circulating during the 1980s – historically, the stories of abuse done to children have not been believed, therefore it is imperative that we believe the children because they will be honest and are too innocent to lie about sexual violence. Now, obviously this isn’t a zero-sum game where you either believe the children or assume they always are lying, but there’s obviously a level of discernment which needs to be taken into account. The main issues in the case of these kids were that the parents essentially coerced their children into making up stories of abuse (thereby giving them actual traumas to deal with later in life), prosecutors would refuse to believe that the children were telling the truth when they said that they weren’t abused and would pressure them into giving a confession just so they would be allowed to leave, and the prevailing belief that children’s accounts should not be questioned*.

Now, before I get any further, don’t get me wrong – I think #MeToo is ultimately a good movement, and one which has been long overdue. However, in reading about how hysteria about child abuse overturned due process and led to grave injustices, I can’t help but get a bit uneasy about how #MeToo is progressing. In the article published on the Globe and Mail, Margaret Atwood calls for more transparency and cautions about “the historical dangers of ‘guilty because accused’ in which ‘the usual rules of evidence are bypassed.’ […] ‘Such things are always done in the name of ushering in a better world,’ she writes. ‘Sometimes they do usher one in, for a time anyway. Sometimes they are used as an excuse for new forms of oppression.'” The parallels to the witch hunts and Satanic Ritual Abuse of the past should be glaringly obvious just from that description. So what sort of response did Atwood’s words of caution receive? 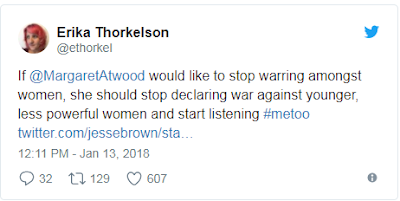 Sigh. I get that Twitter isn’t exactly the place for reasoned discussion, and you can obviously make a real case about why Atwood’s argument is harmful, but bloody hell if this tweet isn’t the picture of the pigheadedness which typifies social justice types. Like, I disagree with the presentation of this tweet in basically every way. First, she calls for Atwood to stop warring with women, basically asking for there not to be a dialogue or any sort of gradiation within the #MeToo movement. Secondly, she talks about war on “younger, less powerful women”, which smacks of the highly flawed use of “check your privilege” to shout down contrary opinion. And third and perhaps most insultingly, she signs off with a call for Atwood to “start listening”… like, are you even aware of how that comes across? Does it sound like you’re listening to Atwood? Do you even think that she deserves to be listened to? Why should anyone give you any sort of respect if you aren’t going to give them respect in turn? And how dangerous is it that you seem to be arguing against fair and due process in a time when authoritarianism is on the rise? Is it only okay when it’s in the name of your own interests?

This controversy also happens to coincide with another public dialogue about how the name, shame and ostracize nature of #MeToo might be over-extending its reach, with an op-ed about allegations against Aziz Ansari dividing people on how far this movement should be reaching and whether there needs to be more thought given to control the damage it can cause. Is this more about educating people on proper consent and respect, or is it about naming and shaming for any sort of sexual grievance? Should we be comfortable with a situation where a public accusation can tank someone’s career and reputation with a presumption of guilt? This is very much the sort of questioning that Atwood was addressing and, if everyone is willing to listen, then such controversies might prove that “[#MeToo] is big enough to encompass another layer in the discussion”. These questions were not asked during the ritual abuse moral panic, and many innocent people suffered irreparable damage to their lives for it, including the children who were supposed to be being protected in the first place.

Now, there is one very obvious qualifier here which I must point out that differentiates #MeToo from the Satanic Panic, and that is that the accounts of women should probably be held to a higher level of reliability compared to that of children (who, as the Satanic Panic showed, were susceptible to coercion and coached statements). In addition to having the statistics to back up their stories, women who come out about sexual assault are almost always going to be subjected to uncomfortable levels of public scrutiny, leading to further harassment. And this is why I’m so uncomfortable about these developments in #MeToo – on the one hand, these accusations are statistically reliable and I can’t think of a high-profile case in this movement which I don’t actually believe to be true. However, on the other hand, we just saw how one false story can wipe away all good-will for a movement, with the story of the 11 year old Muslim girl who lied about being attacked as part of a hate crime. That whole embarrassment and the subsequent hatred it fostered could have been avoided entirely if some scrutiny was applied before it became a headline. That’s really what I’m concerned about in all of this – I want justice to be done for the women who have been abused, I would like guilty perpetrators to face that justice, I would like for the innocent to not be smeared unjustly and I would like to see attitudes towards sex and consent change for the best in the future. Unfortunately, I don’t have the answer on how best to achieve all of these goals, but I will just sit here watching #MeToo with some unease, watching to see if they compromise any one goal for the benefit of another.

*The obvious hypocrisy here being that the parents and the prosecutors, the people who are supposed to be defending the children, clearly did not believe childrens’ accounts when they said that they were not abused. They were under the impression that children will hide any abuse, which prompts them to force them into a confession, but that is just wildly irresponsible.