Hey, it’s that time again, my weekly update! Unfortunately, it just so happens to have coincided with a nasty cold, but I’m going to soldier through it anyway. Also, before we get into this review, I mentioned previously that I was paintballing on May 26th – if you’re interested, here’s some of my helmet cam footage from the event.

Anyway, now to get into today’s review of Red: Werewolf Hunter. Yes, after watching all 8 Howling movies I felt compelled to dive into another werewolf movie. Actually, truth be told the movie was referred to me by a commenter on my list of best to worst werewolf movies. Now I’ll admit I didn’t go in with anything but rock-bottom expectations, especially considering that werewolf movies are terrible in general, but even I get surprised sometimes… 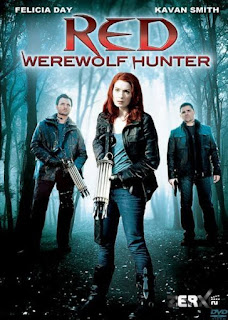 Although it was released 3 years earlier, this DVD cover is strikingly similar to the Hansel and Gretel: Witch Hunters poster…

The gritty, serious, fairy-tale/fantasy retelling is a strange trend which has been circulating in Hollywood the past few years. I’m not entirely sure where it started, but I believe that it’s current popularity stems from Twilight, 2011’s Red Riding Hood and the novel Pride and Prejudice and Zombies (not a fairy tale obviously, but it made people delve into the public domain to give stories a monster-makeover). One might argue that the serious, horror tone brings these stories away from their childish reputation and back to the violent, horror-tinged source material, but more often than not they just come across as way too self-serious for their own good. Red: Werewolf Hunter actually predates the explosion of gritty fairy-tale movies, and so is caught in a bit of a limbo. The movie is connected to the story of Red Riding Hood in the thinnest of ways (it’s implied that the main character Virginia is descended from Red Riding Hood herself), and references to the fairy-tale feel totally tacked-on. In fact, Red: Werewolf Hunter feels more like Underworld without the vampires than a fairy-tale movie. Unfortunately, it doesn’t feature the professionalism and style which made the first Underworld so damn enjoyable. 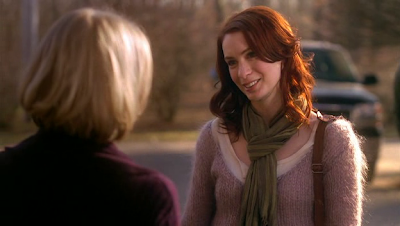 Surprisingly for a made-for-TV movie, Red: Werewolf Hunter actually features some recognizable actors in it. The movie features Felicia Day in the lead role of Virginia (a sly nod to Virigina… Woolf perhaps?), and she does her best to be serious with the material, putting in a decent performance. The real star in the film though is Stephen McHattie. Now he might not be a household name, but you’d probably remember him in the number of small parts he’s played in major studio films (such as Hollis Mason AKA Nite Owl 1 in Watchmen or Hammerson in Shoot ‘Em Up). Fittingly, McHattie also puts in the best performance in the movie, acting in a delightfully hammy manner which is befitting of the script. Unfortunately, everyone else is pretty lackluster, further hampered by the film’s insistence on being taken seriously. 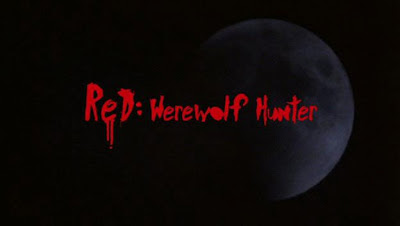 Yes, this is seriously what the opening title looks like.

As soon as the movie starts, you know it’s going to be bad. I actually found myself laughing because less than a minute into the movie, grandma gets torn up by a werewolf… and then I found myself facepalming because the movie shows the werewolf full-on less than a minute and a half in. If the movie was trying to build up any sort of horror or dread, they bungled it almost as quickly as AJ Clemente. This becomes even more unfortunate because there doesn’t seem to be any sort of reason why this scene even exists. When I watched the movie I thought that it was about Virginia’s origins or something, but not long after we’re shown that Virginia’s grandmother’s alive and well… maybe it was supposed to be the “true” Red Riding Hood story but the movie honestly gives us no actual answer.

Anyway, if the first 2 minutes sets a terrible tone for the movie, it actually isn’t an entirely clear indication of the movie’s quality. I’m not saying that the movie is good by any means, but it is certainly better than the first 2 minutes would have you believe. The basic plot goes as follows: FBI agent Virginia brings home her boyfriend, Nathan, and has to tell him that her family are werewolf hunters. Nathan gets bitten by a super-werewolf named Gabriel who is teaching the werewolves to turn at will (normally they have to wait til the full moon). Virginia and her brothers try to kill Gabriel and the werewolf clan and hopefully save Nathan in the process. Despite the basic story, the script still manages to screw things up occasionally. For example, when Nathan gets turned into a werewolf, he runs into Gabriel on the road. Gabriel says only 2 or 3 things and then suddenly turns into a werewolf and attacks. Again, no attempt at suspense or horror, just another example of blowing their load as quickly as they can. There’s also the point where there’s a supposedly full moon 3 nights in a row somehow. Furthermore, the characters are drawn two-dimensionally, especially Virginia’s brother Marcus (whose motivations boil down to “I hate werewolves and want to commit genocide against them”). There’s also one super-awkward moment where Nathan basically says “I’m glad I killed that werewolf, I enjoyed it… is that wrong?”, which prompts a full-on make out session between him and Virginia. 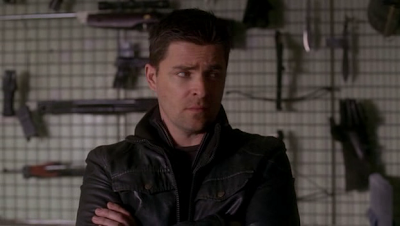 The one area where the movie left me pleasantly surprised was the final showdown at the end. With cheap movies like this one I’m used to lots of promise but absolutely no payoff, but Red: Werewolf Hunter manages to actually be pretty cool for a short period. Near the end, Virigina has to defend her home from being attacked by around a dozen werewolves. To do so, she fires a giant, roof-mounted harpoon gun at the werewolves as they attack, and then when they get inside she guns them down and stabs them left-and-right. For a low-budget TV-movie, the climax is quite unexpectedly exciting. Unfortunately, it is cheapened by some hokey plot points (Nathan is locked in a cage to prevent him from killing anyone, but he turns into a werewolf and the door comes open from a couple of light knocks… and then he kills grandma. Dammit grandma make sure you lock the door next time!) and by an ending which makes about as much sense as the opening did.

I’ve mentioned this a few times now, but the movie just feels really cheap, like an amateur production. The sound effects are laughable (there’s a part with generic-sounding thunderclaps, despite there being no lightning or rain) and just like The Howling: Reborn they don’t use wolf sounds for their bloody werewolves – instead, they sound like T-Rexes in Jurassic Park. Wow, I didn’t realize this was such a common problem in werewolf movies, but it’s just plain sad. Is it really that hard to make werewolves have wolf sounds? Does it really make them seem less menacing in any way? 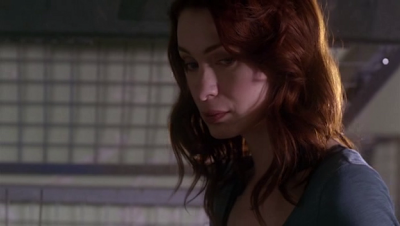 Speaking of the werewolves, they follow the usual “Our Werewolves Are Different” trope. In this incarnation, they can only be killed with silver and only to the heart. Of course, this does not stop people from stabbing and killing them where ever it is convenient. They also have a strange habit of catching fire when they die and leaving a humorously human-shaped ash pile in their wake. Of course, the biggest problem with the werewolves in this movie is this: 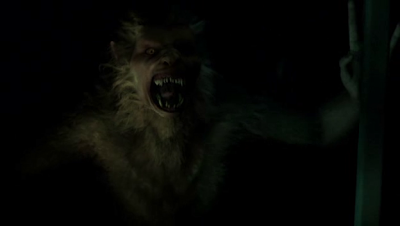 No that is not a screenshot from a PS2 game, that’s what the werewolves look like in this movie. For whatever reason, the filmmakers decided to go 100% CGI on all of the werewolves. Apparently they haven’t heard of the debacle which is An American Werewolf in Paris (or perhaps they have, because the werewolf designs are similar…). The cheapness of the effects leads to some particularly awkward moments, such as this gem of CGI garishness:

Why does that werewolf not have a shadow? Why does it try to jump over Virginia? Why does it look like it follows cartoon physics? Why doesn’t Marcus point his repeating crossbow at it? Perhaps most importantly, why does a taser one-shot a werewolf?!! I just don’t understand why they went for such fake-looking effects for the werewolves – is CGI really that much cheaper than practical effects? Look at the effects for Dog Soldiers (which was made for less than $3 million) and An American Werewolf in London: 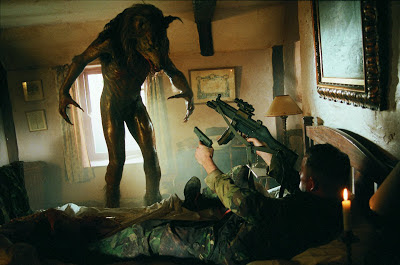 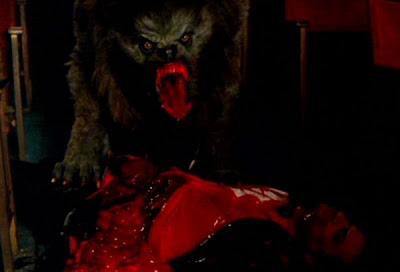 Those look real. I have a hard time believing that the filmmakers of Red: Werewolf Hunter were so strapped for cash that they wouldn’t have been able to make a werewolf at least as convincing as the one in Howling V (which, by the way, was a pretty damn good looking werewolf). Basically, the werewolves in this movie look like crap just because they didn’t go to the effort to try to make them look realistic.

Anyway, the bottom-line is that Red: Werewolf Hunter is not a very good movie. That said, I think there was a kernel of a good idea in there somewhere. The werewolves have a thing they call “The Game”, where they capture humans, release them all at once and then hunt them for sport. That concept alone could have made for an interesting and fun horror-splatterfest along the lines of Cube and Predators. However, as it stands Red: Werewolf Hunter is little more than an average made-for-TV movie.

By the way, I notice that I give out a lot of extremely negative reviews on this blog. That’s actually not normal for me – according to IMDb, my median rating is a 7, with 64% of the movies I review being between a 6 and an 8. It’s just that negative reviews are far easier to rant about, hence the disproportionate amount of negative reviews!