I was at work the other day listening to the local rock radio station’s morning program. It was the typical somewhat-raunchy banter you’d expect from morning hosts on a rock station, but it helps get through the day. Anyway, as I was listening the morning hosts mentioned that they had posted a photo on their Facebook page which was causing a bit of controversy. This got me curious and so I went and checked it out: 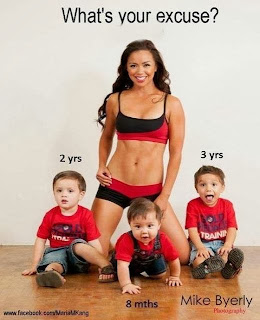 Apparently this photo has gone viral, and I can’t say I’m surprised. It’s clearly ripe for generating debate… although this being the Internet, that really means people screaming at each other and ignoring everyone else’s perspective. On the one hand, the woman who made the picture is coming across as being rather smug. Considering that her job is to be a physical fitness trainer, it shouldn’t be quite so difficult for her to get ripped in comparison to, say, someone who works 40 hours a week in a cubicle. The radio hosts were mentioning that there were people commenting on the photo claiming that it was an example of “fat shaming”, that the woman is bullying fat people and that she should go jump in front of a bus (again, it’s the Internet).

On the other hand, I kind of agree with the picture. I’m pretty skinny, but I wouldn’t kid myself into thinking I’m in great shape or anything. The picture isn’t shaming fat people, it’s shaming anyone who isn’t fit, which pretty much everyone seems to have ignored. But anyway, what’s my excuse for not having a six-pack? It really does come down to laziness. Sure, I could probably look like that if I put the effort in and reordered my priorities, but I don’t have the motivation to do so. Sure some people may physically be unable to look like that and then okay, you do have an excuse. That said, if you’re like me and (I imagine) 99% of everyone else who the image is directed at, then you need to fess up that maybe you don’t have an excuse beyond laziness. Obesity is becoming a major epidemic (not to mention those of us who just aren’t in shape to begin with) and I’m sure the vast majority of us don’t have some sort of incurable malady to give us a get-out-of-shame-free-card. Honestly, instead of being offended, many of us just need to look at ourselves and take the blame for once instead of deflecting it onto others.