So the other day I was on my lunch break and one of the people I sit with mentioned that an imprisoned child rapist was gang raped by 20 cell mates, stitched back up, and then had his stitches torn back up so he could be gang raped again. Just everything about this story left me horrified and disgusted, but I think I ended up even more disgusted when the person who told me the story said “Good, he got what he deserved.” When I replied that they didn’t deserve that, they replied that they should get worse, because they did the worst thing you can do. This was probably just a throw-away moment in her day, but it has stuck with me and left me really troubled for a number of reasons. 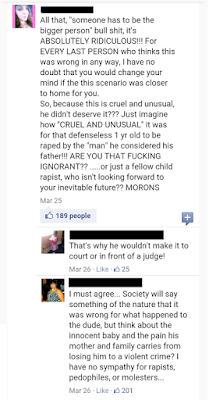 Look, I’m gonna make a controversial statement here: child rape is bad. However, that doesn’t mean that this guy deserved to be brutally gang raped. NO ONE deserves to get raped. It’s the whole reason why we consider it to be bad in the first place. And just because he violated this principle in such an awful way still doesn’t mean that he deserves to have his basic human decency taken away as well. I have a hard time wrapping my head around how a perfectly normal person can say that this was a good thing. I mean, I think that they probably aren’t really thinking about the implications of what they are saying, because if they are then that’s a really screwed up outlook on life. When I was younger and far more conservative, I might have agreed with their sentiments, but I didn’t even view criminals as real human beings in a sense, nor would I have actually examined what I was advocating. I mean, think about what you’re saying: you’re claiming that it is good for a person to be forcibly gang raped until they are left bloodied, and then thrown back to the wolves immediately after being given medical care to be gang raped again. You’re saying that it is good for someone to suffer so severely. You’re saying that it’s good to make a conscious decision to commit an act of brutality on someone in a really sadistic, torturous manner to maximize suffering. 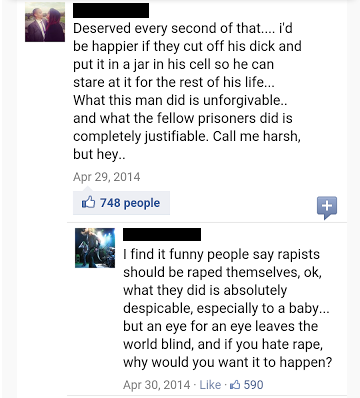 Society does not get better by the principle of an eye-for-an-eye. Violence only breeds more violence. I’m obviously letting my own faith and sense of morality shine through here, but c’mon… there’s a reason why vigilantism is illegal, why revenge isn’t a free pass to commit crime and why religions have been drilling in the idea of forgiveness as the height of morality for millenia. Awful stuff like this doesn’t solve anything or fix the fact that a child was raped and killed. A proper legal system will determine the punishment this man should receive, and any retribution beyond that should be dealt with as if the man were totally innocent as far as I’m concerned. I’m extremely curious to see how this story would be received by feminists, Christians and especially Men’s Rights Activists (since one of their few valid goals is seeking the elimination of prison rape)… I might have to take this story to Reddit to get a general consensus, but my suspicion is that they will all be pretty evenly split between disgust and gleeful retribution, since this comes across more as a personal morality litmus test than a group signifier. 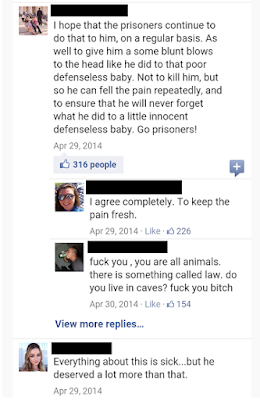 On another note, the victims’ reaction to the recent Charleston shooting has shown a really powerful example of how we should respond to injustice. When faced with the man who had killed their friends and families, a man who was fueled by pure hatred, they forgave him. Dealing out revenge may be cathartic, but it is ultimately shallow, selfish and doesn’t bring any real justice to the world. Repaying evil with mercy is a truly inspirational act and makes the world a better place, helping to undo some of the evil which was initially perpetrated. As David Wong put it so eloquently, the rape of a rapist doesn’t cancel the other out, it just means that there’s more rapes in the world, and ultimately means that “rape” wins. Just try to remember that the next time you feel wronged – you can get some temporary personal satisfaction, or you can make the world just a little bit nicer.

I know which one I’ll try to live out.