Note: I would hope that it goes without saying, but just in case, everything in this post is meant to be taken as satire.

As I mentioned in my last post, it’s election period here in Canada. If you live here, then by now you have no doubt been bombarded with campaign rhetoric, attack ads and are no doubt sick of it already. However, I am well aware of what the real question on all of your minds is: which of these potential prime ministers would emerge victorious in a no-holds-barred death match? Luckily you have me, a self-accredited expert on theoretical gladiator showdowns, to help solve this question! So without further ado, let’s check up on our candidates… 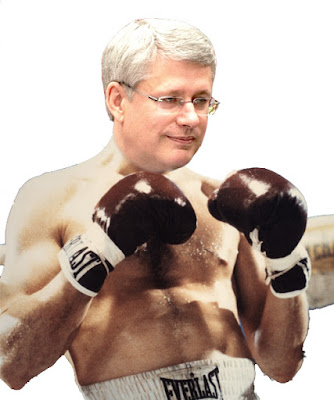 First up is the current reigning champion, Prime Minister Stephen Harper. Notorious for being a bit of a boring and unemotional prime minister, Stephen Harper is simply hyper-aware of his image and branding. As a result, he has displayed basically no weakness through his career as a prime-minister-by-day, death-battler-by-night. However, the same cannot be said for his support staff, which have plagued Harper’s reign with scandal after scandal. Thus far, Harper himself has always come through with clean hands, but this shows a few aspects of his personality in battle: he has poor choice in friends and so is basically going to be fighting solo and he is devious enough to set up fall guys to make himself appear flawless.

Harper’s career has demonstrated that, no matter how bad the situation looks for him, he should never be counted out. In 2008, when it appeared that the Conservatives would be defeated by a Liberal-NDP coalition government, Harper managed to prorogue parliament to prevent this from happening. This also shows that he likes to play the long game: as a result of the prorogation, the Liberals and NDP began to squabble and the opposition was soon fractured, putting Harper into an even stronger position. He has also destroyed opponent after opponent from the Liberal party, annihilating Paul Martin, Stephan Dion and Michael Ignatief with little effort, which goes so way to showing how dangerous a death battler Harper is. Oh, and all of this in spite of his support staff’s scandals which were occurring at the time.

Of the three combatants, Harper is the only with any experience as a champion, and he knows exactly what it takes to stay on top. Despite one of his opponents being both a politician AND a lawyer, Harper is definitely the dirtiest fighter of our three combatants, hurling verbal attacks at his opponents long before the campaign even started and retaining power through underhanded means. As we’ve seen though, this is his way of prodding his opponents to seek out weakness. Harper is more of a turtling combatant who usually waits until his opponents destroy each other before going on the offensive. As soon as he sniffs out a weakness he’ll attack mercilessly. However, he also is a solo fighter: he can’t rely on his support staff at all because they constantly undermine him, so expect no help from this quarter. Oh and also, if those accusations about him being a robot are true, then that will no doubt be a boon in the arena. 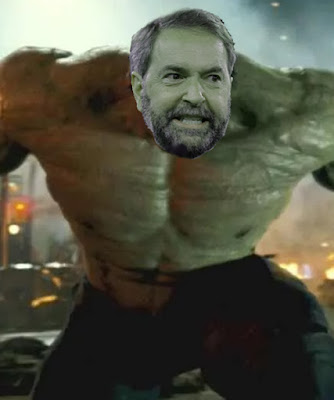 Secondly, we have the official opposition leader, Thomas Mulcair. With his barrel chest, epic beard and “explosive, spittle-specked rages”, Thomas Mulcair comes across as the most physically imposing deathmatch candidate – and this is also in spite of being the oldest as well. From what I have found, he also seems to have the most “humble” origin of the three candidates, being born into a huge middle-class family and having to work construction to pay his way through law school. While there’s some conjecture involved to figure out how the other candidates will overcome their opponents, Mulcair’s clear physical superiority should mean that he can always just overpower them. He has also been described as a “pit bull” in politics – a descriptor which I can only assume also applies to his jaw strength (or perhaps they think he’s a very lovely family companion who would never hurt anyone).

Mulcair was the spearpoint in the current NDP take-over of Quebec, which was the main reason why the NDP has managed to become the official opposition in the last few years. More impressively, Mulcair managed to do so by usurping a riding which was considered a Liberal party stronghold. This descriptor of him taking down a Liberal stronghold against all odds suggests to me that Muclair is basically Solid Snake. However, Mulcair happens to be a bit of a wildcard. While he is the leader of the NDP, he achieved this position after the death of Jack Layton shortly following the last election. He has had quite a successful political career thus far and has demonstrated confident leadership in his short time in the federal spotlight, which sets him up as a far better bet than Justin Trudeau, but still has yet to prove himself in the more competitive arena against Stephen Harper. On the other hand, the death of Jack Layton means that Muclair will want to avenge his mentor, giving him some powerful motivation.

Despite his temperament and being relatively untested at such a high level, Muclair’s leadership over the last few years has assuaged some doubt about whether he can truly make it to the top. He is poised to be a real challenger to the current reigning champion, and there’s little he’d love more than to slay his opponents with his bare hands. If there’s one thing that Mulcair has demonstrated, it’s that if you punch a brick wall and it hasn’t broken, then you just haven’t punched it enough yet. 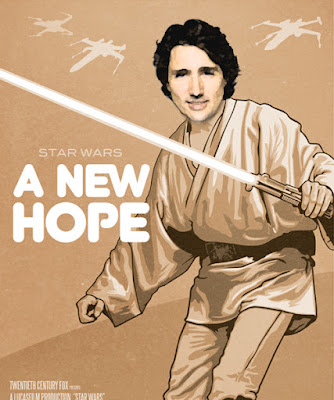 Lastly, we have the political rock star, Justin Trudeau. After nearly a decade of being destroyed by Stephen Harper and the Conservatives, the Liberals looked for a chosen one. Sooth-sayers whispered of a prophecy of a young man who would lead their party to glory once again. They thought back to the “good old days”, when they were political gods led by the divisive Pierre Trudeau. But then, lo and behold! A man came to them and soon people were promising a Second Coming. Party leadership bowed down to advance the one they had decided was their prophesied hero, the Son of Trudeau.

The Liberals have a lot riding on Justin Trudeau. While he is their most popular leader in the court of public opinion in quite some time, he is still a major darkhorse in the political arena… and not to mention the deathmatch arena. His primary competitor during the Liberal leadership race was Marc Garneau – a freaking astronaut who would very likely defeat both Stephen Harper and Tom Mulcair in a deathmatch by himself. However, Justin Trudeau is more of a wildcard. At 43, he is the youngest candidate by a very wide margin, which gives him a slight advantage for vitality, but also hurts him in terms of his limited experience. He is also a teacher by profession and an art student, which unfortunately doesn’t really help when you’re battling for your life in a blood-stained pit (unless he picked up some great survival tips from The Hunger Games).

Despite his seemingly weak credentials though, Justin Trudeau has proven that he can take a blow. Stephen Harper has been slinging accusations of incompetence at Justin Trudeau since before the election campaign began, and Trudeau has shrugged them off with class. This suggests that Trudeau is level-headed and more intelligent than we give him credit for. It also demonstrates that our current reigning champion is most afraid of Trudeau, which is an interesting power assessment. Harper has also tried to bring him down by letting the public know that Trudeau smoked pot in the past, but Trudeau shrugged this one off with ease. In fact, his public opinion actually went up after this came to light. This shows that Trudeau is the realistic “people’s fighter”, who doesn’t concern himself with the dirty world of political battles. Plus it also demonstrates to me that Trudeau isn’t beyond using performance enhancing drugs to his advantage, like a super-powered Tony Montana.

If nothing else, Trudeau is an unpredictable element which will shake up the deathmatch significantly. He could be a dark horse victory, or he could fizzle out very quickly. Harper seems to be gunning for him most of all, which puts his chances in jeopardy, but Trudeau has also gone on record saying that he won’t cooperate with Mulcair, which makes things even more difficult for him. Furthermore, he is also likely going to focus his attention on bringing down Mulcair, which could give Harper the chance to take them both out. Trudeau is definitely the unpredictable element in this battle – the Brad Wong or Dampierre of the match, if you will.

So now that you’re familiar with the combatants, be sure to tune in for Part 2 early next week when I pit them against one another in a no-holds-barred fight to the death! Who will claim the real prize this election period, the elusive title of deathmatch champion of Canada? Only one can claim the crown!