Oh looky, it’s time for another installment of The Rebuttal. What sort of dumbassery made its way into my Facebook feed this week? A friend of mine (we’ll call him Johnny) has an MRA/egalitarian friend, who made a ridiculous post this weekend. Johnny passed this post on to another friend of mine (we’ll call him Atlas), who then passed it on to me, knowing I’d enjoy it. Check it out: 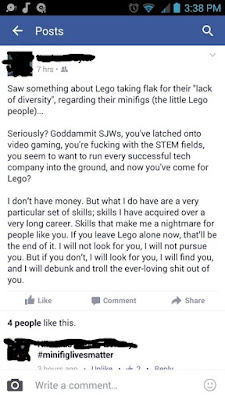 Hoo boy… I’m not even going to bother going into his spurious claim that SJWs have “ruined” video games, STEM fields and have somehow destroyed every tech company… actually, wait, what the feth? Where the hell did he get that idea from? I assume that’s some sort of MRA talking-point, but for those of us not drinking the same Kool-Aid, the idea that SJWs are destroying tech companies sounds absolutely ridiculous. I didn’t really look into this very comprehensively, in part because it sounds like utter garbage, but the only site that I could find that was pushing this view was a damn pickup artist’s blog. Considering that I was searching for “women destroying tech companies”, you think that there would have been more results about women actually destroying the tech industry (in fact, most results showed how the tech industry is destroying itself via ridiculously long work hours… and by not hiring more women). 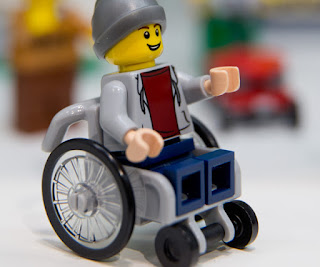 Anyway, getting back on track, I hadn’t heard any sort of SJW-types complaining about lack of diversity in LEGO, so I was curious if this was yet another case where a handful of complaints are conflated into a whole movement’s viewpoints. As a result, I came across this article which explains that LEGO decided to release their first wheelchair-bound minifig in an effort for more diversity. That is a fantastic move on LEGO’s part which has made many kids very happy, and has generally gotten a very positive reception. How can you possibly see this as a bad thing?

Let’s be charitable though. The original post alludes to Johnny’s friend not knowing the details of the situation, but just being annoyed by SJWs ruining everything. We all make those sorts of declarations without the full story. I mean, he’s not going to seriously advocate giving children with disabilities the middle finger, right…? Well, I wasn’t expecting this, but Atlas decided to sent Johnny the news article, which prompted Johnny to grill his friend for being overly-dramatic. His friend, unfortunately, doubled-down on his comments: 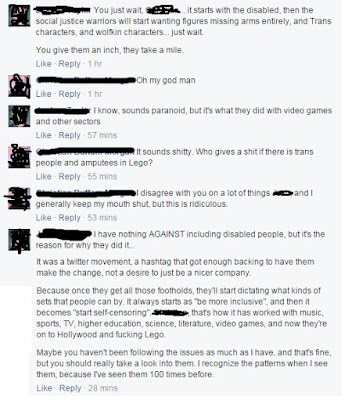 Sigh… First of all, he is relying heavily on the slippery slope logical fallacy* to try to make this seem like such a bad thing, but even then he’s on thin ice. So what if LEGO makes armless, trans (ooh, potential transphobia, nice!) or wolfkin minifigs? How is that going to “ruin” LEGO? Furthermore, it’s not like people can’t make armless, trans or even freaking literal werewolf LEGO characters already, so I’m not so sure that they’d even bother to acknowledge them. Either way though, this is the whole reason why LEGO is so amazing to begin with – it’s a blank slate which promotes creativity. Giving a paraplegic child an avatar with which to live out his fantasies as a hero with a disability is both empowering and absolutely awesome. LEGO is all about giving people the ability to live out their fantasy worlds, and I say the more people we can bring in under that umbrella, the better.

As usual, the real issue is that Johnny’s friend is deep in an ideological framework and the world is completely filtered through that lens (which is made worse by the fact that he subscribes to news sources which fuel this world view). He thinks that SJW-types have ruined all forms of entertainment (they simply haven’t, full-stop), or that “not being a prick” is not only self-censorship, but a truly henious thing. For an idea of why he thinks this, it’s worth mentioning that he is also seriously under the delusion that the disadvantaged have leveraged their status and supplanted white men as the real power within society.

Oh, and by the way, Johnny’s friend considers himself to be an “egalitarian”… which should more-or-less put to bed the argument that “feminists should try being more egalitarian!” Egalitarianism as a movement has been co-opted by MRAs and various other hateful organizations which have become deluded enough to believe that they have become the truly disadvantaged group within society. From that particular mindset, this is a reasonable view, but to anyone else… well, egalitarianism my ass. To all those who are stuck in such a mindset, I can only hope that you can one day you acquire the ability to take a step back and maybe admit that you were wrong. 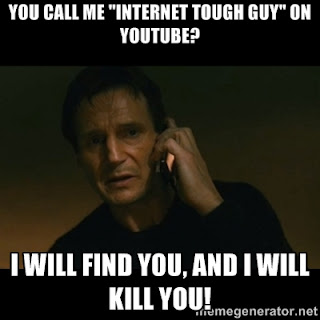 To finish up, I’ve been ignoring the Taken reference this whole time because it is just your typical Internet tough guy, dick-wagging bullshit. Oh, you’re going to troll and debunk all of us SJW-types with your “egalitarian” knowledge? Well there’s only one thing I can say to that…

Somehow I think it’s going to work out better for me than it did for Marco from Tropoja though.

*Normally I hate throwing around accusations of logical fallacies when arguing with someone as they are often used the way “check your privilege” is, as a tactic to shut down an opponents’ argument without actually having to address it. However, in our one previous confrontation, Johnny’s friend was slinging logical fallacy accusations at me, so I figure that he more or less has it coming. Not to mention that his logical fallacy accusations were very strenuous (eg, he claimed that saying that I thought that most feminists would agree with me on something was a “No True Scotsman” claim, which it clearly is not, as I didn’t say “those who disagree with me are not true feminists”… and then he claimed that Reddit MRAs are not true MRAs and tried to explain that such a view was not a No True Scotsman fallacy… yeah).