I saw Ready Player One at the movies last night (it was a fun time), but there was one poster in the lobby which really captured my attention: 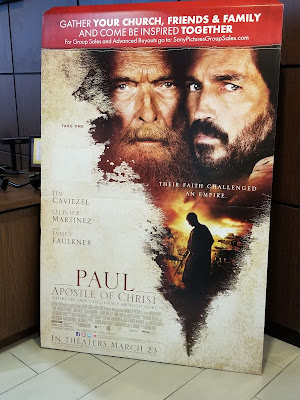 If you have read my previous posts about the Christian media industry, then you’ll probably guess what caught my eye on this. That big, red declaration at the top lays bare the entire reason this, and any other big Christian movie for that matter, gets made: you, as a Christian, are part of an easy-to-manipulate market demographic who will bring in a strong return on a small investment. It’s no coincidence that the new God is Not Dead film* came out this weekend as well – Christians often make a big stink about how evil Hollywood is, but studios will still throw them a bone because they are a built-in audience that will run on word-of-mouth marketing and, most importantly, they have money at their disposal. It just sickens me how blatantly they’re commodifying faith and how we as a community have turned this into a whole commercial enterprise.

Like, look at those statements. First, gather your church – even a modest church could net you 50+ people, but with mega churches you could have hundreds of people roped into seeing Paul: Apostle of Christ. Again, word-of-mouth marketing. You, as a Christian, are amazing to a studio because they spend way less to make these films and they’re pretty much guaranteed to return a modest profit because of how we pressure each other into seeing these sorts of movies that suck up to Christians living in a bubble.

Second, gather your friends and family – this part sickens me the most. To me, this essentially is saying “Hey, you want to evangelize to your family but don’t know how? Boy, do I have the perfect product for you…” I mean, hell, it’s one thing if you let that sort of thing happen organically, but the fact that you’re trying to sell your film on that notion rubs me the wrong way. Of course, this can also be interpreted as “gather your Christian friends and family and go see this”, but either way this is just another word-of-mouth attempt to get butts in seats.

Finally, come be inspired together… bloody hell, that is so condescending, and yet, probably accurate for the sort of person who would see this film. It’s like the template requires that every Christian movie has to be “inspiring” in one way or another. The Kendrick brothers, for example, have built a career on this concept. Even silly comedies, like Road to Redemption, have to renew your faith and try to proselytize to your unsaved friends who definitely aren’t cringing the entire way through this film you forced them to sit through. It is what it is, I guess, but some variety would certainly go a long way, especially considering that most Christian media isn’t really made for the people outside that bubble anyway. Perhaps that’s why God is Not Dead is not telling you to bring your unsaved friends and family, while Paul: Apostle of Christ is… which actually is making me start to re-evaluate exactly which notion is more disgusting. Ugh. Here’s “S.M.C.” (aka Sunday Mass Consumption) by Project 86 to play us out…