The recent poisoning of former Russian agent Sergei Skripal and his daughter Yulia with a deadly nerve agent is only the most recent of a long series of events that should remind us that the Cold War has never truly ended. In fact, it makes the plot of Skyfall, where the British Parliament claims that the use of field agents by MI6 is unnecessary, seem positively outdated. The story is still unfolding, but just this morning the UK, France, US and Germany have all condemned Russian and are promising retributive action, while Russia promises that they will retaliate in kind. I imagine that this will all end with some strong words and chest thumping before fading into the background, but I’m more interested about the dialogue surrounding this event and what that may mean.

The following image is a snapshot of the first comments on the CBC article I linked above at the time of writing. I’ve been checking CBC news throughout this story’s development and it is pretty indicative of the sort of comments which dominate these articles: 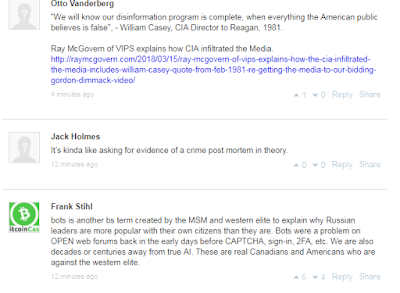 Articles about the poisoning tend to be filled with pro-Russian voices, mostly with the intention of sewing doubt (you can see one here about not believing that “Russian bots” are real, while another references CIA media manipulation; I have also seen comments elsewhere regarding the lack of proof for Russian involvement). It seems like the sort of thing which is well below the business of a government, but there is certainly evidence that Russia is actively involved in spreading low-level misinformation as part of their propaganda machine. It also isn’t even the first time that Russia has assassinated former agents on British soil since the end of the Cold War, which provides further evidence that they deserve the scrutiny being leveled at them now. Some Russian officials are claiming that this is a false-flag operation, which just sews even more doubt in particularly paranoid sorts of individuals. For those sorts, this is equivalent to 9/11 and the American invasion of Iraq, believing that (for some inexplicable reason) liberals want to go to war with Russia and will use this false flag operation to get the sheeple public on their side (this is a narrative which was being put forth during the American election, that warhawk Hillary was going to cause a war with Russia).

This whole situation is making the assertion that we live in a post-truth world more demonstrable to me. The funny thing about all of this is that I have to be very careful to crouch all of my words because there really is no actual proof that Russia is responsible for this attack, despite the likely evidence that they did. Didn’t it seem like Iraq had some part to play in the War on Terror, didn’t we have evidence of WMDs, back when they were invaded? With all the misinformation and, dare I say it, fake news that is getting sewn out there, it makes it incredibly difficult to determine what is true and what is not.