When last we checked in with the Dead or Alive franchise, anti-SJW types were stirring up a controversy about how Dead or Alive Xtreme 3 wasn’t being released outside of Japan and this was all feminists’ faults (despite no one actually giving a shit about Dead or Alive Xtreme 3, the fact that this was 100% Tecmo-Koei’s decision, and that PlayAsia was clearly co-opting their outrage in order to make money). Fast-forward almost 3 years and now there’s a new controversy brewing about Dead or Alive 6. Sigh, what now? Are those special snowflake, easily #triggered SJWs complaining about the series’ trademark objectification of women and gratuitous jiggle physics?

Oh wait. No, it’s the anti-SJWs who are complaining again. And this time, it might be even more stupid situation than the last non-troversy was.

So, what could get people so riled up about Dead or Alive 6? Well, it all boils down to one simple statement that game director Yohei Shimbori made when the game was announced: female sexualization was going to be toned down and breast physics would be more realistic. Predictably, fanboys are threatening to boycott the game now just based on this statement alone. For example, One Angry Gamer is livid about the sheer mention of toning down and that the game is using a different engine than DOA5 and Xtreme 3. Meanwhile over on Sankaku Complex, a Japanese hentai and porn news site (link is NSFW, obviously), there has been plenty of butthurt whining that SJWs have “ruined” the game before we’ve even gotten a chance to really see it in full. Perhaps even more predictably, some players are claiming that they’re going to buy Soulcalibur VI instead because it is leaning harder than ever into the fan service (for what it’s worth, I was planning on buying SC6 because I really enjoy the the gameplay of that series, until I saw how embarrassing the fan service was this time around). The reaction to this one little change really shows you how much value these “fans” put into the actual mechanics of their favourite fighting games.

Some of the funnier/stupid comments on Sankaku Complex.

Beyond that though, there’s more to why this is such a clear non-troversy. For example, read the following statement made by Yosuke Hayashi:

“We’ve always had the sex factor in the game; in the past, the female characters had to have big breasts, they had to have scanty dress. […] We’re trying to focus on the real women that surround us; the voice of a female, the mannerisms. We are being realistic about it. We want to show something that’s more high class, that adult males of our generation could look at a woman [character] and be impressed with her as a woman, not just as a pin-up. That’s what we wanted to tell our fans.”

That sounds like the sort of thing which would really rile up the anti-SJW types… except that this was said 6 years ago about Dead or Alive 5, and in terms of the sheer volume of swimsuits and new fetish-bait characters, that game ended up being the most sexualized game in the franchise (outside of the Xtreme spin-offs). Compared to this, everything said about Dead or Alive 6 has been pretty tame thus far. 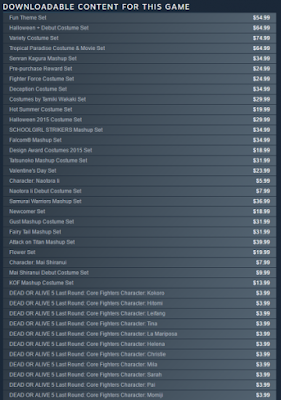 This isn’t even taking into account the deluge of DLC which is sure to find its way into DOA6. DOA5 and (to a slightly lesser extent) DOAX3 both made bank off of their sexy costume packs, which would cost players literally over $1000 to purchase everything. Since DLC game into vogue last generation, fighting games have basically turned into costume factories and I can’t possibly see DOA6 passing this opportunity up. However, does this mean that all of the sexy costumes have been shunted off behind a paywall as some players are saying? Shimbori even made a point of changing series lead Kasumi’s sexy robes in favour of a more functional body suit, so are we no longer getting bikinis as default costumes? Well… it’s too early to say for certain, but somehow I doubt it. For one thing, take a look at Kasumi’s DOA6 costume and tell me that that isn’t sexy in its own right, even without having to show off skin. But not only that, the reveal trailer itself made it pretty clear that the game isn’t going to neuter the sexiness. Just look at Helena: 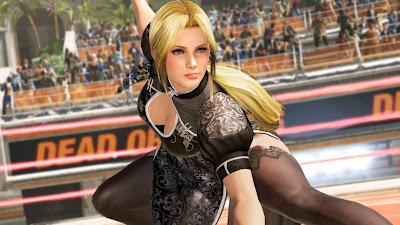 Camera pan to cleavage shot? Check. Panties visible? Check. Outfit that makes more sense for stripping rather than fighting? Check. Now, this is obviously just one character, but we haven’t seen what the more overtly-sexualized characters, such as Tina and Christie, are going to look like, nor have we seen whether the two most popular fetish-bait characters, Honoka and Marie Rose, will make the cut. In any case though, I do feel like the outrage that anti-SJW types have worked themselves into is premature right now at best, or downright ridiculous at worst. I’ve dragged Sankaku Complex into this article because, quite frankly, their coverage and pearl-clutching in this non-troversy has been hilarious. When Hitomi and Lei Fang were teased in fully-clothed silhouettes, they decried that “the developers [are] clearly sticking to their socjus agenda of preserving the purity of fictional video game girls”, which is particularly funny because they’re clearly wearing costumes of theirs from DOA5 and because the franchise has always had this weird sense of hands-off purity and innocent to (most of) its characters, emphasizing a voyeuristic take on sexuality rather than an active owning of it (which, honestly, is the main issue with DOA’s take on sexiness in the past). 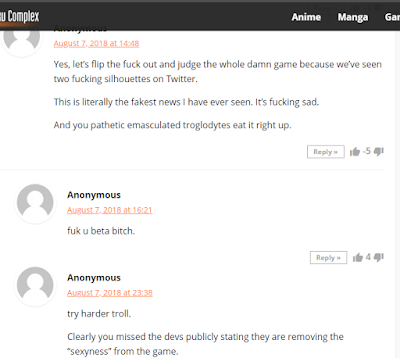 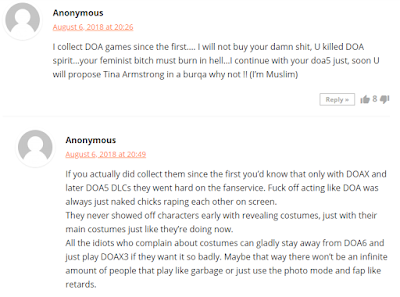 As for the breast physics, the One Angry Gamer article about claims that they aren’t even present in the current build of the game, but from what Shimbori has said, “we are trying to achieve some natural movement, so when you move, things move naturally. That’s our intention.”… so, the boob physics are going to be like the physics present in Xtreme 3 then? Yes, it does sound like they’re cutting out the exaggerated physics options which most games in the series have had… but oh well. That’s really all I can say about that, I’ve never understood the appeal of laughably exaggerated jiggle physics, especially when the game is going to aim for more natural movement similar to DOAX3.

The toning down of the sexier aspects of the franchise also coincides with a design shift towards esports and more brutal fighting. DOA has always prided itself on being the best-looking fighter on the market, which you can really see when you put it up next to Soulcalibur VI for example. Past games would dirty-up the fighters, but only to a certain point – for example, DOA5 made a big point about introducing dynamic sweat and dirt systems as the fight progressed which coincided with an art style shift, from more of an exaggerated anime aesthetic to one that looks much more natural. However, DOA6 is now building upon that more realistic aesthetic, introducing cuts and bruising which looks, quite frankly, painful. It has been stated that “the shift to more realistic graphics […] is thanks to the new engine. Characters visibly take damage during fights, with bruised faces and blood making combat feel more visceral in the process. Shimbori also said that they are thinking about adding in an option to disable those details for players less interested in violence.” 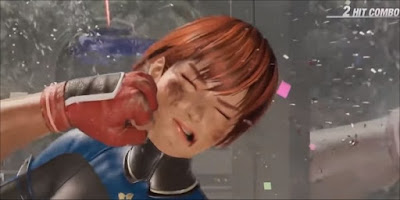 This right here feels like a fulcrum in this issue that is being overlooked by the more reactionary fans of the series. Let’s say that they kept this battle damage in and continued to play up the sexiness. Suddenly, we’d have a game which overtly sexualizes assault against women… hell, even with the toning down that they’re doing, I’m not entirely certain that it’ll be enough to make this not feel uncomfortable. Speaking as someone who enjoys this series, I’m actually questioning whether the move away from always having their fighters look “beautiful” is going to be worth it (especially if they start adding in the sexier outfits later on), but I’m willing to wait and see for now.

Other than the pervy, voyeuristic aspects that the Xtreme games really push, I don’t have a problem with the sexiness in the DOA franchise. It’s mostly harmless and the series has been tucked into its own corner for quite some time where it doesn’t really influence the industry much. However, that right there is something that Tecmo-Koei is clearly trying to escape – you can see how the excessive fan service since at least the release of Xtreme Beach Volleyball has made the series more and more niche with each entry. Clearly, something had to give if they wanted to try to broaden their audience. We’ll see if they manage to pull it off and come up with something worth supporting on its own mechanical merits. 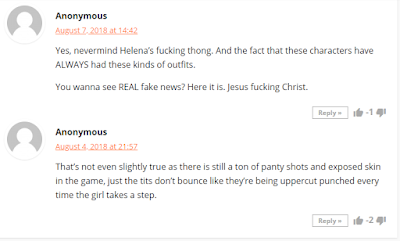 95% of the comments section is people whining about SJWs to a chorus of upvotes, and then these guys pop in, say the objective truth and get downvoted, naturally.

2 thoughts on “Oh Look, Another Manufactured Dead or Alive Controversy”