So recently I stumbled across this review of a video-game movie called Noobz. Normally this wouldn’t excite me all that much, except this particular review ravaged the film. As a bit of a purveyor of bad cinema and crappy-movie lover, I instantly knew that I had to track down this film and review it for myself. Was it really as bad as Dan Ryckert said? Well, read on and find out… 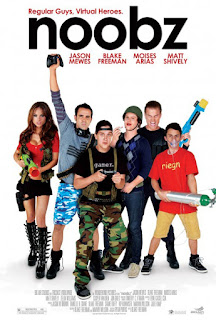 So what exactly is Noobz? Well it’s supposed to be a comedic road-trip movie about a clan of gamers trying to get to the biggest gaming tournament in the country, celebrating gaming culture along the way. Honestly, that’s a bit of a rote scenario for an independent film (see Fanboys for Star Wars, One Week for supposedly “Canadian” culture, etc), and Noobz really doesn’t distinguish itself from the other similar movies in the genre… well, not in a positive way anyway. Why not? Well for one thing, it does a really, really poor job capturing gamer culture. While I didn’t like Fanboys, its one redeeming feature was that it captured the Star Wars geek culture pretty well. Noobz is closer to One Week in that it shows a really stereotypical view of its subject matter… except, in the case of Noobz, this is a really BAD representation. The director and star, Blake Freeman, was actually a professional gamer… a decade ago. Based on the content of the movie, it seems like this is where all of Freeman’s “research” came from, because it’s a woefully outdated and portrays gaming as the domain of anti-social nerds. This MIGHT have flown back then, but this is 2013: basically everyone games now, and nerds are actually coming in vogue as well. You’d swear this movie was made by CNN or something based on the way it portrays gamers, not someone who is apparently one himself. Furthermore, he just completely fails to capture gaming culture in general. One of the most glaring examples of this is that there’s a Frogger tournament at the same tournament that the main characters are at. However, only 2 people enter it because coin-op gaming isn’t “cool” anymore. Now it doesn’t take a lot of research to know that retro gaming is a huge subculture right now, and I wouldn’t be surprised if such a tournament actually had more competition than a modern shooter. Another issue is covered here:

“There’s a passing mention of Frogger, but the only gameplay footage from the fictional Cyberbowl video gaming championship is based exclusively on Gears of War 3. While it’s clearly a form of product placement, it’s a bizarre choice at that: Gears of War 3 isn’t a championship level game by any means (especially with the atrocious host-advantage issues in multiplayer).”

Watching the movie, I actually speculated that this was the case, but it’s nice to see it confirmed. That said, I’m not really all that knowledgeable about tournament-level gaming (I’d imagine that PC gaming, particularly Counter-Strike, would be probably the #1 choice for competitive play…?), but it’s notable that this stuck out as clearly as it did. 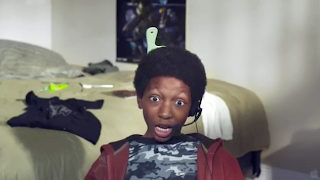 In addition, Freeman shows only the worst aspects of gamer culture. You know that douche bag 12-year-old screaming racist and homophobic slurs on your headset every time you boot up a first-person shooter? Basically every character in this movie is that kid, except that they’re like that 24/7 and not when they’ve got the anonymity that a headset provides. Sure, some of them probably are douche bags like that in real life, but Noobz disproportionately presents every gamer as someone with some sort of major personality flaw. The “heroes” are stereotypical dicks living the Jersey Shore lifestyle (with the “dudes” and “bros” thrown around CONSTANTLY throughout to cement this), and every single female character is either a grotesque hag or a sex object. And, of course, everyone is shocked to discover that the girl gamers are actually good at video games… this, unfortunately, is probably a stereotype which actually persists in this culture, but Freeman isn’t exactly putting this part in here to make any sort of statement. I think the worst part about all this though is that Blake Freeman really seems to think that he’s portraying gamers in a positive manner, because you get this sense all the time when the character Andy spouts off his ramblings about how major league gaming should be considered a real sport. While I’m not entirely sure I’d call them “athletes”, pro gaming clearly takes a lot of skill and deserves some respect, but Noobz isn’t doing this culture any favours.

I think it’s also worthwhile to go deeper into each of the characters… because boy do they ever deserve to be torn apart. Each and every one of them is a one-dimensional stereotype: there’s Cody, the slacker with major anger management issues. Next is Andy the optimistic dude-bro who’s in love (read: wants to screw) with Rickie, a girl gamer on the other team (who isn’t really given much characterization beyond “is hot”). After that is Oliver, the massive screw-up who is also an extremely flamboyantly closeted gay (the movie tries to make his sexuality ambiguous, but the scenes where he runs around in lipstick, screams like a girl, constantly tries to suck his friends’ dicks, etc pretty much destroy any possible sense of ambiguity that they could have tried to foster, instead turning him into a hugely offensive stereotype). Finally, there’s Hollywood, a disabled kid who I believe has a severe form of asthma… of course, everything about him revolves around his juvenile sexual fantasies and his breathing apparatus (apparently it’s supposed to be funny when his air supply gets cut off and the kid is freaking dying in front of us). Seriously, even in the end credits he apparently writes a hit hip-hop single called “Let Me Breathe”, because everything in his life apparently revolves around his disability.

As you can probably glean from the descriptions of the main characters, Noobz is offensive as a bus full of dead babies, but you don’t know the half of it. The portrayals of Oliver and Hollywood are really the worst of the bunch (apparently gays aren’t considered “men” in this), but there’s also plenty of casual racism and sexism. Did you see the picture above of the black kid with the comb in his hair? I’m pretty sure you can guess exactly how they portrayed him in this. There’s also a scene where an Indian gas station attendant acts like a ridiculously racist caricature, and tells the cops he’s white so they won’t discriminate against him. It seems like Freeman thinks that he’s being clever and satirical, but it really doesn’t come across that way: I mean, is are we really supposed to believe that he is making fun of racists by being racist and then simultaneously calling out racial profiling at the same time in some sort of inverse-satire cluster-f–k? Short answer: no. Instead, I really get the feeling that Blake Freeman is just a hardcore opponent of political correctness, suggested by the scene where the douchey little black kid gets a free ride on “DeezNuts Airlines” (“thank you for riding DeezNuts!” …I did not make that up) because he claims that he’s being racially profiled by a white attendant. While I hate political correctness as much as the next guy, Freeman isn’t using offensive material to make a statement or to be satirical… he seems to just find offensive things funny for no other reason than it’s offensive. Even in this department, they fail because they recycle the same old offensive jokes over and over and over again.

In fact, for a supposed “comedy”, Noobz is deathly short on laughs. I can honestly say that I did not laugh at any of the jokes in this film, which is pretty pathetic. The only times I did laugh were in sheer disbelief as I literally yelled out “WTF, did they seriously put something that stupid in the movie?!?” This is pretty brutal in the scenes with Greg Lipstein (a play on Billy Mitchell) which might have been funny for the crew but translate really awkwardly to the rest of the audience who are sitting here thinking “what the hell is wrong with this guy?” Furthermore, the comedic set-pieces are really tenuously constructed. Take, for example, the scene I mentioned earlier with the Indian gas station attendant. Cody goes into the gas station to pay for their gas and get some snacks, but comes across this little shit of a girl. Of course, the two begin going at it, insulting each other with dialogue that doesn’t reflect human speech in the slightest (that might be an odd criticism, but the dialogue in this scene is just totally out of tone with the rest of the film). Then the girl’s mother believes that, because Cody is hugging her daughter, that he must be a pedophile and proceeds to taser him without explanation. Then the Indian gas station attendant launches into his ridiculous shtick. This is honestly some of the most contrived comedy I’ve seen in a movie, and it’s just not handled very well (uhh, no pedo). 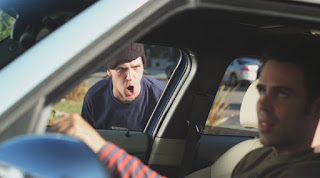 Anyway, in the end the “heroes” lose to the girl gamers (who were far more deserving of the prize money anyway), but get signed to Mountain Dew… except they don’t, because 2 seconds later in the credits they reveal that the guy was arrested for impersonating a Mountain Dew executive (WTF!? Is that even a crime?!!), but I’m not really sure that I care, because the main characters were such huge douche bags and they didn’t learn or earn anything from the events of the movie… so it makes things completely pointless. Congratulations, you just wasted an hour and forty minutes of your life!

Bottom-line: the only positive thing I can say is that Freeman is a competent enough director, but he severely needs some better material if he ever wants to amount to anything. Noobz is not that material. It has a bland story, non-existent comedy, garishly offensive and doesn’t even portray its own subject matter with any sort of reverence. Unless you’re looking for a really bad movie like I was, stay away!