Hello readers, I’m about to embark on something that I’ve been wanting to do since I started this blog in December. As I’m sure most of you are aware, I’ve done movie reviews quite frequently on this blog. In fact, 4 of my Top 5 most-viewed posts have all been movie reviews (for those curious, my top 5 posts are: Hulk, Judge Dredd, 5 Reasons to Prepare for the Ape Apocalypse, Transformers 3 and Dredd). However, since starting this blog I have really wanted to start writing franchise retrospectives – and I’m not talking about mega-franchises like Harry Potter or Terminator. Rather, I want these sorts of articles focus on franchises which, for whatever reason, don’t get nearly as much written about them and yet have a very interesting history (well… maybe I’ll do a Star Wars every once in a while, but it’ll be the exception rather than the rule). If you were ever looking for a place to read about The Howling series or Resident Evil movies, then I’d suggest you start following me! If not… well then follow me anyway, make me feel like I’m accomplishing something here.

Anyway, the first franchise which is getting the retrospective treatment from me is the Final Destination series. As a little background, I was only really dimly aware of these movies until about a year ago – I had always thought they were bog standard slasher films. My only real interactions with the series had been in the form of a Final Destination 3 poster which I swear was outside the local movie store for years, and the laughter which accompanied the (thankfully redacted) announcement that the 5th entry in the series would be called 5nal Destination (who didn’t read that as “Anal Destination”? Seriously?). However, this changed when a friend and I happened to be hanging out when Final Destination 3 came on the TV. Despite having little interest at the time, we watched the first 30 minutes or so before we had to leave. However, what I had seen had been very intriguing, so I decided to track down the movie and see how it ended. I’ll save my thoughts on that particular movie for later, but suffice to say I tracked down the other films and watched them all out of order (I watched them in the following order: 3, 5, 1, 4, 2).

First off, I’m going to mention the characters. Unlike some other movies in the series, Final Destination actually goes to some effort to flesh out its characters and make you give a damn about them. Devon Sawa’s Alex Browning is an interesting lead, a bit of an outsider who you can’t ever be entirely sure isn’t totally crazy. I also quite liked Ali Larter’s Clear Rivers, a character which actually manages to subvert the stereotypical “female love interest” role and become a figure of her own. In fact, of the main cast there’s only really 2 throw-away characters there to provide some quick and easy death fodder… which is actually not too bad by the standards of this series. The lead actors put in acting which ranges from “pretty good” to “serviceable”. Of the leads, I felt that the only one which was really weak (both in acting and characterization) was Kerr Smith’s Carter Horton, the typical bully character. However, he does develop a bit by the end which redeems him somewhat. Oh, and no discussion of Final Destination characters is complete without a mention of Tony Todd’s Bludworth – he only gets about 5 minutes of screen-time, but he just steals every scene he’s in. The man has a creepy voice and just knows how to chill you to the bone with little more than a look and a smile. 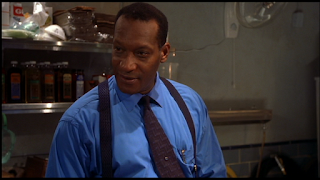 Of course, in addition to all of these characters is the main attraction of the whole movie – Death itself. Despite never actually appearing on-screen (aside from some very mysterious liquid and in a reflection), Death is a very real presence and character in the film. The film really establishes Death as a morbidly creative force which interacts with the world to kill his victims, dropping them clues about their impending demise for little more reason than we likes the thrill of the hunt. The methods which Death uses to slay his victims are very imaginative, although they don’t devolve into full-on gore porn like some of the later films in the series. The fact that Death never actually appears just makes him all the more frightening – he’s an omnipresent, inescapable, inexhaustible force which is going to inevitably hunt down and kill the characters that we are becoming invested in and he could strike at any time. Furthermore, compared to other slasher villains like Freddy Kruger, Jason Voorhees or Leatherface, he doesn’t devolve into self-parody – Death is established pretty early on as having a very dark sense of humour and irony and this is one of the aspects of the series which has remained true throughout (although each movie will play with the details somewhat). Director James Wong should be commended for pulling off this sense of malice for a villain who isn’t physically present, because I can just imagine how easily it could have backfired on him. The fact that it was his first film makes the achievement even more impressive.

What is perhaps the most interesting aspect of the first Final Destination is that it is quite different from its successors. Whereas subsequent movies in the franchise would skew closer to slasher-horror and eschew character development in favour of a body count, the original Final Destination is obstinately a supernatural thriller film with some very light slasher elements. The emphasis is really clearly on mystery and suspense rather than on killing off people in the bloodiest ways the writers can imagine. It’s unfortunate that the other movies in the series don’t do this more often, but in Final Destination characters actually survive Death’s attempts to kill them more often than not. As a result of this, and of the fact that we actually give a damn about the characters, the potential death scenes have a lot of suspense – you can’t really be sure whether or not a character really is going to die, or even the manner in which Death will attempt to off them. Of course, Death has a really morbidly creative streak and his plans tend to have redundancies in order to ensure that he collects his kills… 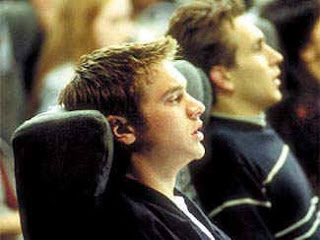 Any discussion of a Final Destination film is incomplete without mentioning the central disaster. In this movie it’s a plane crash, which really does prey on many peoples’ fears. The filmmakers could never have predicted that this would become even more powerful only a year later after 9/11 – seriously, I thought that they were just banking on post-9/11 paranoia when I first saw this movie, until I found out that it was released a full year prior to it… quite prescient indeed! In any case, the disaster itself is very frighteningly well-done, weakened only in that it doesn’t look entirely convincing now. However, it was done with nearly entirely practical effects, so it’s quite impressive what they managed achieve.

Of course, following the opening disaster, the surviving characters are one-by-one picked off by Death, and it is here that the film slowly starts to come apart. Being the first in the series, Final Destination isn’t plagued by franchise fatigue yet, and so it manages to keep this section interesting with some creativity and philosophy rather than defaulting to slasher tropes. The characters struggle with a variety of conflicting emotions – why (and how) were they spared from the wreckage of Flight 180? And when Death starts coming after them, they all are forced to wrestle and come to grips with the idea of their own mortality. It’s some really interesting stuff, and far beyond what I would expect of a teenage thriller/horror film of this sort. Unfortunately, the last 20 minutes of the film largely drop this philosophizing and it is at this point that things start to get really weak. I felt that these last 20 minutes really didn’t engage with me nearly as well as the rest of the movie have and end up putting a bit of a damper on the whole experience… and that’s just unfortunate, because I really do like this movie. It has some great ideas – they might not all be executed perfectly, but it’s generally a well-done film with an intriguing premise that puts it head-and-shoulders above a run of the mill thriller/horror movie. When I first saw it I would have given it an 8/10, although I think that was a bit generous now. That said, I definitely enjoyed it, and certainly recommend seeing it even if you are turned off by the ideas of the sequels.

Be sure to come back soon for Part 2 of this retrospective: Final Destination 2!