We’re starting up a new column here on IC2S (to go along with Quick Fixes, Retrospectives and Reviews) which I have decided to call “The Rebuttal”. I get a lot of stupid bullshit in my Facebook feed; I’m sure that you do as well. Sometimes however, we get something that is a new level of stupid though which can’t just be ignored – it needs to be corrected. That is where The Rebuttal comes in. Here, I will attempt to give a reasoned analysis of the post in question and hopefully dispel some of the ignorance it was fostering. Got it? Okay, let’s get started…

Oh look, feminism! Who would have guessed? 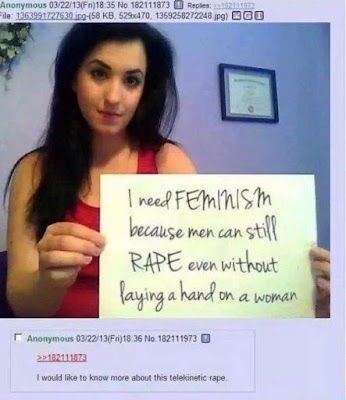 This was posted on a parody Facebook page called “Meninists” (sigh), and shared by a friend who thought that the 4chan reply was funny. Honestly, on a certain level the snarkiness of the reply is kind of funny, but that is only the case because of what the feminist wrote. Personally, I think that this is a great example of the issue of “not explaining yourself” and “picking your battles poorly” which I have suggested that fellow feminists should be careful of if they want to have a better public perception. Saying that “men can rape without laying a hand on a woman” isn’t one of those things that is going to get you to say “oh shit, maybe I do need feminism!”, but rather it’s going to raise a lot of eyebrows. At worst, it’s hyperbolic and trivializes “real” case of sexual violence. At best, it’s a poorly worded argument and weakens the definition of what constitutes “rape”. Personally I’m feeling that she tried to come up with something that would sound profound and compelling, but ended up wording things really poorly which made her look somewhat ridiculous.

That said, it shouldn’t be too difficult to understand what she meant. Women spend their lives being catcalled, objectified, pressured and threatened by men. I know that many women who go jogging are well aware that they get creepy men stalking them… and as a man, that’s horrifying. Most women live with the threat of rape hanging over their heads, whereas guys like me don’t really worry about it beyond “don’t take candy from strangers” when we’re little kids. This is demonstrated in the “only good rape joke” by Ever Mainard where she jokes about her relief at finally getting “her rape” which she has been warned about all her life. In any case, as badly worded as this feminist’s statement is, it should be pretty freaking obvious what they’re referring to, and not even all that controversial either.

It’s also worth noting that, by specifying that it is “men” who can do this, the feminist in question kind of ignores that this is a potential problem for both sexes. Obviously, rape is a MUCH more common problem for women, but of course men can be objectified and threatened as well. 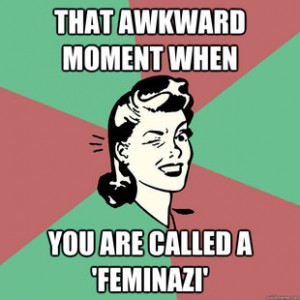 That brings us to the other side of the issue. Someone obviously went and cherry-picked this picture and posted it to 4chan for maximum snark. By meme-ifying this image, it no longer becomes an opinion open for dissection, it becomes a case of “dude, check out how this feminist got PWNED!” It occurs to me that this is similar to how Merlynn132’s analysis of why there aren’t female characters in gaming was extremely troublesome, but throw in a stupid comment about how it’s the greatest thing on the Internet and suddenly it gains legitimacy and focuses the perception. That’s too bad, as I think that the original picture has plenty of room for reasoned discourse. What exactly is she trying to say? How are women subjected to sexual harassment in our society? Is her use of “rape” trivializing the more traditional definition of rape? Just how prevalent is sexual assault in society? There’s a plethora of dimensions to this.

…of course, instead the subscribers of the Meninist get to enjoy jokes about telekinetic rape. Umm… congratulations on having your world-view reinforced?