Welcome back to part 5 of The Howling retrospective! In this entry, we’re going to focus on the fifth entry in the franchise, Howling V: The Rebirth! Five movies in, and the only passable movie was the first (with each of the successive sequels managing to redefine the concept of “suck”)… does The Rebirth even stand a chance? Read on to find out… 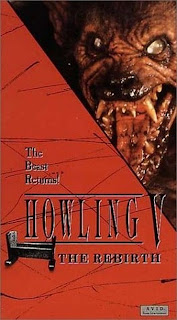 Despite failing pretty spectacularly on Howling IV, in part due to no one wanting to finance the damn movie, the Howling movies were still making quite a bit of money from VHS sales. As a result, a fifth movie in the franchise was greenlit and fast-tracked, being released only 6 months after the previous film. By all accounts, that’s nuts. I’m guessing production must have started before Howling IV was even finished, but still… a 6 month turn-around time is unprecedented and almost certainly spells bad things. This fast-tracking also meant that the movie was running on a fairly low budget, cutting down on the number of actors and sets required. It’s also worth noting that Howling IV‘s werewolf costume was reused for this film… the good werewolf costume that is (probably best of all the sequels too), so not exactly a bad thing. The movie was largely filmed in Hungary in an old castle and on some castle sets. I can’t help but wonder if they wrote the script entirely around this location, or if Black Knight or something had just wrapped up filming and someone wanted to make the most out of the unused castle sets. Whatever the case, Clive Turner is back again as co-script writer and in a fairly important acting role as well. Sure, he was involved in Howling IV but, to be fair, wasn’t really responsible for its failures (at least, not that I can see) so it’s not exactly a strike against Howling V. 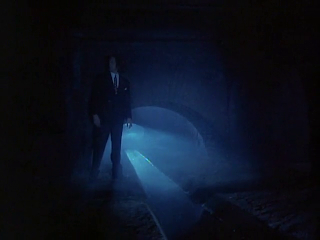 Howling V moves from the outlandish setups of the previous films into something far simpler – a murder mystery. I’m not entirely convinced that this is coincidental, but a remake of Ten Little Indians was released the same year, so the producers might have been trying to cash in on that interest. Whatever the case, Howling V features a very generic mystery set-up with a bit of a monster movie twist: a group of strangers are isolated together in a castle and soon discover that, one by one, they’re being knocked off by a werewolf who is hiding among them and must discover who they are before it’s too late. It’s a very generic set-up, but it’s still effective (and refreshing compared to the failed plots of the other Howling movies. It also reconnects this movie to the themes of the first Howling, in that it emphasizes mystery and horror. The plot also allows a sense of paranoia to be created quite effectively – it’s not exactly at the levels of The Thing (who can hope to measure up to that anyway?), but you will be guessing and second-guessing who the werewolf is until around the last 15-20 minutes, at which point it starts to become fairly obvious. That said, I won’t spoil who the werewolf is in case you want to watch the movie (although I will mention some of the people who die, so keep that in mind). 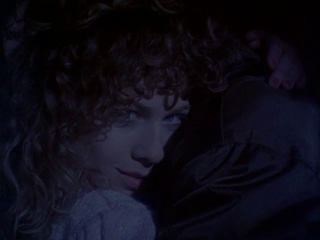 Unlike the acting in the other Howling sequels, the performances are actually decent across the board. No one really stands out as being good, but most of the actors manage to put in acceptable performances. That’s pretty damn important, because Howling V is a character-based mystery. The fact that the cast does a fairly decent job helps to distinguish everyone and keep the film from failing on the same level as Howling IV. Really, only a couple cast members stick out for bad acting… which is better numbers than even the first Howling can brag about. Stephanie Faulkner (who plays Gail Cameron) starts out decently, but by the time the group reaches the castle, basically everything she says sounds unconvincing or flat. Luckily, she dies fairly early so she doesn’t bring things down too much. William Shockley (who plays Richard Hamilton), on the other hand, is decent for quite a while, but around the halfway point he begins to become very grating. The only other actor who puts in a sub-par performance is Elizabeth Shé (who plays Marylou Summers). However, she is somewhat exonerated by the fact that she is supposed to be playing a stereotypical bimbo… and beyond that, I kind of liked her (from what I’ve seen though, there are quite a few people who disliked her acting so I’d be remiss to not mention her). Even the writing’s pretty funny at times… and not unintentionally so like in Howling II. Here’s a couple snippets that I found quite clever:

Bartender: “Enough to turn you off women…”
Ray: “Not when you consider the alternative.”

Marylou: “It’s not easy to pretend to be stupid!”

Catherine: “You, Mr. Price, you look like a man motivated by purely primary needs”
Ray: “You could be right, but it doesn’t necessarily support the theory. For example, when I first met you, I thought you looked like a nice person.” 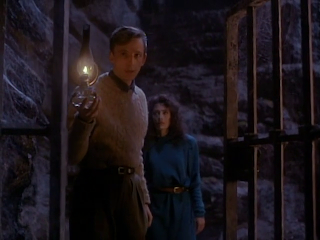 One thing which a lot of people who see this movie bitch about is that the werewolf very rarely appears. As a result, a lot of people mock it and say it’s not even a werewolf movie at all, and that the movie is basically just a bunch of people running around for an hour and a half. However, I would argue against this evaluation. Yes, the werewolf rarely appears and there isn’t really all that much violence, but the movie makes up for this with the sense of mystery and paranoia. The werewolf in this Howling fits the Jaws ideal: hiding the monster from us makes it more effective. Considering how often we have been subjected to terrible looking werewolves in the other Howling sequels, this is a good change which brings them back a certain amount of mysteriousness and threat. Also, rather than causing the movie to be boring (like Howling IV), the rest of the movie is able to hold itself up in the absence of an on-screen werewolf. 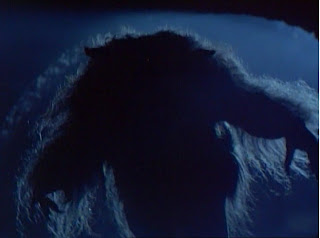 All-in-all, I actually quite liked Howling V… this is probably somewhat heretical, but I even liked it more than The Howling at times. Unfortunately, the only thing really holding it back is that it’s very derivative and that the acting ranges from mediocre to sub-par. Still, considering how cheaply and quickly it was made and its awful pedigree, Howling V is quite a lot of fun. That said, it’s quite divisive since it doesn’t have a ton of werewolf action, and so I know I’m probably in the minority on this evaluation. Still, I’d recommend checking  this movie out, especially if you have watched the other Howling movies. If nothing else, it looks like a masterpiece in comparison.

Be sure to come back soon for part 6 of this retrospective, Howling VI: The Freaks!