This probably shouldn’t be a super controversial statement, but I rather like Kylo Ren. In my mind, he’s the Star Wars equivalent of John Maguire – a very confused kid who gets caught up with the wrong people because he never had any proper guidance and then, before he can really realize it, he’s in a terrorist organization. This is a rather fascinating, timely and even untraditionally tragic characterization to give to a villain, one with plenty of amazing opportunity to either make him double-down on the villainy and become something truly monstrous or (and I’m hoping that this is what happens in Episode 8) have him begin to mature and realize that “holy shit, what am I doing with my life?” and attempt to make amends. 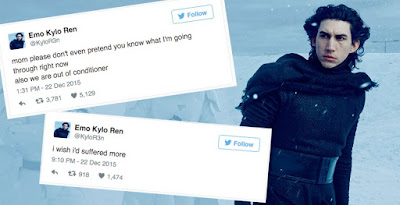 Naturally, with that sort of setup, the whole conversation about Kylo Ren has devolved into “emo”, angsty, whiner kid. This wasn’t the case immediately after release, but as soon as Emo Kylo Ren occurred, suddenly it was his defining character trait and people began harping on it. I’m gonna be honest, I’ve seen The Force Awakens four times now and I don’t really get where this is coming from. He only ever angsts once in the whole film, and that’s when he gets confronted by his father (who he doesn’t particularly like). Oh, and he breaks stuff twice, but is that really enough for people to label him as “whiny”? If nothing else, he is considerably less whiny than Anakin was in the prequels, and infinitely less insufferable and more understandable even when he is angsting.

There’s got to be some sort of word for this, where the public conversation ends up colouring the perception of a character. It’s sort of like a cognitive version of Flanderization; Memefication might be the most accurate term for it at the moment. We saw the same sort of thing happen last year with Jurassic World, an incredibly flawed movie which people couldn’t legitimately criticize without wasting all their time on Claire’s heels. I didn’t notice or give a shit about the heels while watching the film, they’re really inconsequential and hardly that unusual in these sorts of silly action movies. However, that’s what the conversation gravitated towards, so by God we’re going to beat this meme into the ground. 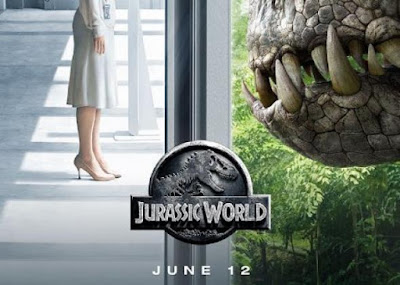 This seems to be something that’s only getting more prevalent due to the Internet allowing petty little complaints or skewed perceptions to echo throughout popular culture. That’s not to say that it didn’t exist before that though – arguably the absolute best example is Batman & Robin, since every time it gets brought up someone will go “oh yeah, that one is terrible, I mean they put nipples on Batman!”, as if that alone is some sort of signifier for why the movie was awful (that’s putting aside the actual problems of poor/overly-hammy performances, crass self-commercialization, bonkers directing, etc which make Batnipples look cute in comparison). Obviously this is not something super important in and of itself, but it is something worth paying attention to as you can perceptibly see how the conversation about a piece of media changes as the memes solidify.

…and to end on a completely unrelated topic, check out my badass Kylo Ren cosplay! 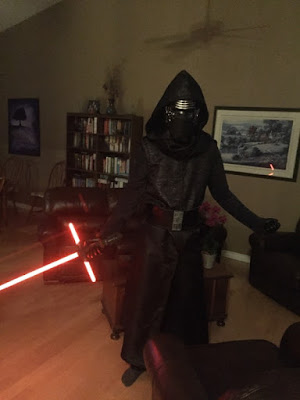