I was listening to a podcast the other day and someone mentioned off-hand that there was a metal band fronted by dogs. Naturally, this revelation caused me to instantly shoot up in my seat and try to find this band, because it sounded so intriguing. It turns out that there are actually a few bands fronted by animals and the results are certainly… interesting.

Honourable Mention: No Grave But the Sea For Dogs, Alestorm
This one definitely doesn’t count, but it was my original touch-point for animal-fronted music. Basically, it’s Alestorm’s No Grave But the Sea, but with all the vocals replaced by a barking dog sound effect. It’s pretty funny if you’re familiar with the songs and the dog barking is done in the same rhythm as the actual vocal tracks, but it’s not like they had a dog in the studio just barking constantly over each track. Check out the track “Alestorm” here. 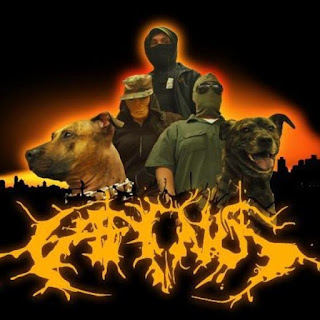 Kicking this list off with the band which inspired it, we have Caninus, a deathgrind band headed by two pit bulls, Basil and Budgie. The band was the side project of Most Precious Blood guitarist Justin Brannan, which lent the group some musical chops to go along with the vocal gimmick. The band was actually signed to a record label, War Torn records, and had three releases – two split EPs and a full album with the absolutely amazing title of Now the Animals Have Voices. Sadly, the band is now defunct, as Basil had a brain tumour and was euthanized in 2011 and Budgie died in 2016.

As for the music itself, I’m very mixed on it. Like I said, the sound and production are quite polished and coherent than some of the other bands on this list. However, I’m not a fan of the music itself – the songs range from 30 seconds to maybe 3 minutes at most, meaning that Now the Animals Have Voices is over very quickly. I know that this is the whole point, but the music is literally just lots of snarling, growling and some barking set to music. The vocals are appropriate for the heaviness of the music, but it doesn’t amount to something that I’d actually want to listen to. They’re on Spotify though, so feel free to give them a listen for yourself. 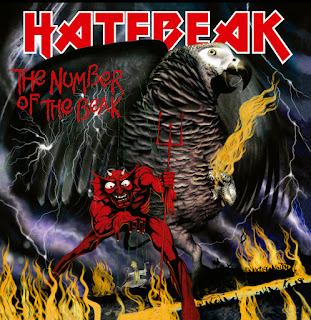 After Caninus, Hatebeak is probably the second biggest animal-fronted band out there, based on the research I found for this post. Hatebeak are a death/grindcore metal band fronted by a grey parrot named Waldo. The band is signed to Reptilian Records and is still active today, having released three split EPs (including one with Caninus) and a full-length album in 2015 called The Number of the Beak. Hatebeak really pride themselves on their bird-pun titles, which are equal parts cringe and chuckle-worthy. If nothing else, I’d recommend you at least check out the titles of their songs. I mean, just look at the album art for The Number of the Beak. Hatebeak takes itself much less seriously than Caninus, really leaning into the whole joke of its premise.

Musically, Hatebeak are a mixed bag. The production on The Number of the Beak is very bad, almost demo-quality. For some of their songs, I’d say it would be appropriate to label Hatebeak “noise”, as their music is largely just distorted guitars with some squacks overlaid on it. On such tracks, the parrot vocalist feels like a gimmick. However, there are some tracks where Waldo’s vocals actually resemble grindcore “bree-brees”, such as “Beak of Putrefaction”, “God of Empty Nest” and “Seeds of Destruction”, which isn’t a musical style I’m into, but it’s familiar enough to bring a smile to my face and I can definitely see how someone could be into these tracks. “Roost in Peace” is also a pretty solid death metal track. All-in-all, I actually enjoyed bits of Hatebeak more than Caninus, even if the production is total ass and the first half of the album makes the parrot vocals feel like a gimmick. However, when Hatebeak works, it works pretty well, although it’s pretty clear that the band put more effort into their song titles than they did in the music itself. The Number of the Beak is on Spotify, I’d recommend that you give it a listen. 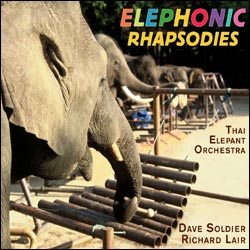 The previous two entries were bands fronted by animals, whereas The Thai Elephant Orchestra are a band made up of animals, performing their own music. The elephants are actually signed to Mulatta Records, which prides itself as “purveyors of the unique and bizarre”, where they have released 4 albums: a self-titled album, Elephonic Rhapsodies, Water Music and Smash Hits. The band’s page on Mulatta Records proudly states that the band is comprised of “Elephants in the Thai jungle playing specially designed musical instruments. The elephants improvise the music themselves. The Thai Elephant Orchestra was co-founded by Richard Lair of the Thai Elephant Conservation Center in Lampang and performer/composer Dave Soldier”.

As you would probably expect from music improvised and performed entirely by animals, The Thai Elephant Orchestra’s music is mostly just noise. There isn’t really much artistry or cohesion to it, although in this case the gimmick of having music created by animals doesn’t diminish the product itself. Elephonic Rhapsodies is on Spotify, so if you’re interested then you might want to check it out. 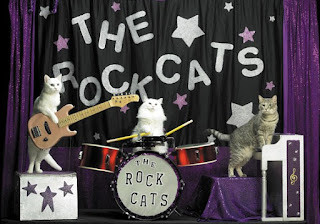 Aaaand here’s where we get more into the gimmicky stuff, if you can believe that after Caninus and Hatebeak. The Rock Cats are an off-shoot of The Acro-Cats, which is essentially a cat circus. Each show ends with a performance by The Rock Cats, which is dubbed “the only cat band in existence”. The sarcastic reviews on the band’s Wikipedia page are incredible:

-“An unpredictable assortment of instrument clanging, and rarely does it sound like the cats are playing the same song, let alone an actual, fully realized piece of music.”
-“Really, really fun way to spend an afternoon”
-A reviewer of a 2013 show in New Orleans was critical of the band’s musicality, and complained that the advertised “seasonal carol selections such as ‘A Cat in a Manger’ and ‘Catnip Roasting on an Open Fire'” never materialized.”
-“What they lacked in technical skill, they certainly made up for in rock ‘n’ roll catitude”.

The band also has a website which is pure 90s Geocities cheese and which apparently isn’t updated with any regularity because it has a listing of the band members, but the front-cat, Tuna, has been dead for a year now (and this despite having a listing for a show that happened a couple days ago as of this writing). The site also has a music video of the cats (and a rooster, and a gopher) playing music which seems to be 100% legit, although edited heavily to make it listenable if the band’s reviews are anything to go by. Unlike the other entries on this list, they do not have any music up on Spotify. 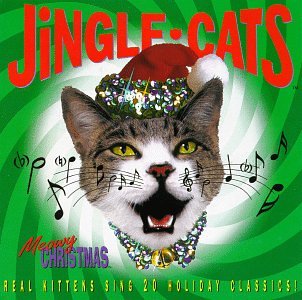 …and of course there’s an entire Christmas-themed band of cats out there. Unlike The Rock Cats, The Jingle Cats merely meow over humans playing Christmas carols in a similar manner to No Grave But the Sea for Dogs. They released three albums, Meowy Christmas, Here Comes Santa Claws and a non-Christmas album, Rhythm and Mews, all three of which are available on Spotify. They also have a website which is somehow even worse than The Rock Cats’ was.

Christmas albums tend to be gimmicky enough as it is, but having cats as the vocalists just adds a whole new dimension of gimmickry to the proceedings. The music itself is very generic holiday fare, almost like something from a karaoke version of the songs, and the cat vocals grow tiresome very quickly, especially when they are arranged in a very high pitch. Also, for some reason, there’s a dog on lots of these songs as well, despite this being a supposedly cat-based band. As painful as the Christmas albums are, Rhythm and Mews is a special kind of insane, featuring cat-based covers of “Secret Agent Man“, “Home on the Range” and the freaking “The Star Spangled Banner“.

I… I’m not sure what else to say beyond that. Maybe we should just stop with these animal bands, or at least the cat-based ones, okay?

One thought on “Animals in Bands”