Apologies, I have been busy lately and so haven’t had much time to update the blog. It’s not a matter of lack of content/inspiration… on the contrary, I have a notepad file with more than a half dozen ideas I could use in a pinch. In any case, I’m not shirking my commitment to make a post at least once per week – unlike my past blogs, I want this one to last long enough to get some sort of readership!

So this week I’m tackling a bit of a personal review. I recently saw Ang Lee’s Life of Pi in theatres, and quite enjoyed it, it was an almost perfect adaptation of the book (although I wish that M. Night Shyamalan had gotten the director’s duties, but I’m not about to complain about the movie we did get). However, there was only one other Ang Lee movie I had seen up to this point, and that was his 2003 blockbuster Hulk… which for at least half a decade I had proclaimed “the worst movie I’d ever seen”. Now, the last time I saw it I was 14 or 15. Both the superhero genre and myself have changed mentally and physically. I decided that it was time to give Hulk a second chance. Was I just harsh on it as a stupid teenager, or did it really deserve my righteous indignation? Well hang on, we’re gonna take a trip back to the past… 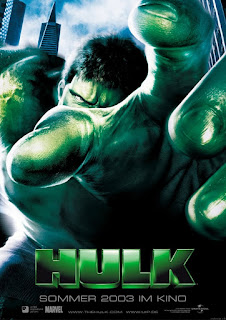 Let’s travel back to the year 2003. Superheroes were just starting to get really cool again. Spider-man had blown our minds, and its sequel would soon top it. Batman Begins would revolutionize the whole genre in a couple years, but at the time comic book properties were treated as… well, comical properties. I had watched some of the Hulk cartoons on TV as a kid, so when I heard they were making a movie adaptation I thought that it had the potential to become the new Spider-man. Of course, when I saw the movie itself, I was extremely disappointed with the direction Ang Lee went in. It was more of an art-house film than a superhero blockbuster, and so I was very bored with it. However, I also noticed some rather… questionable elements of the film that further added to my distaste for it. I hadn’t been more disappointed in a movie before, and so I proclaimed Hulk the worst movie I had ever seen (it wasn’t until my mother made me watch The Santa Clause 2 years later that it was finally knocked off its “lofty” position).

Honestly, the action element of Hulk hasn’t really changed at all. It really is a quiet, thoughtful production. If it wasn’t about a man who turns into a big, green, pissed, muscle-bound monster when he gets angry, then this might be more forgivable. However, the whole point of the Hulk is that he smashes things. It’s his thing. Ang Lee might have been brave tackling this property in such an intellectual way, but he also displays that he just doesn’t understand why people like the Hulk in the process. He compensates by trying to deconstruct the character, specifically asking “why is the Hulk so angry?” and then exploring the potential origins of that. The answer Lee comes up with? Daddy issues, and lots of them to go around. Lee also treats the film as more of a monster movie than superhero origin, in the vein of Frankenstein or (especially) The Wolf Man. This isn’t necessarily a bad thing, but it’s just another source of disappointment for fans, it was marketed incorrectly and towards the wrong audience. 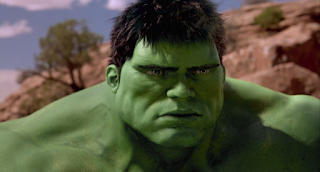 The Contemplative Hulk (this image seriously summarizes about half of his screentime).

If Ang Lee had pulled off his super-hero deconstruction project successfully, then I could have totally forgiven the lack of action… however, Hulk is caught in the uncomfortable crossroads between being very smart and very, very stupid. I mean, the film is attempting to work psychology into the superhero mythos and figure out what makes Hulk angry. That’s pretty interesting. However, that effort is sharing screen time with jaw-droppingly idiotic moments like this:

Ugh, those dogs would look out of place in a Star Wars prequel…

When the Hulk finally goes on his rampage, the smashing is frequently broken up by the big guy staring at things thoughtfully. This is where I can legitimately call out Lee for being overindulgent – the Hulk is impulsive, not contemplative. Bruce Banner can be thoughtful all he wants to, but Hulk should be the embodiment of aggression and impulse. Quite simply, Hulk can’t stick to a consistent tone. Whenever it tries to get you to take it seriously, a really intrusive and cheesy transition will pull you out of the drama, a CGI monstrosity will invade the screen or someone will do something maddeningly illogical that shatters all its efforts. Central to this issue is the plot itself. Lee wants to make a psychological drama, and while he gets the psychological aspect down well enough, the plot that it is hung on is, put simply, an atrocious mess. Here’s just a few of the biggest issues I noticed while watching it again: 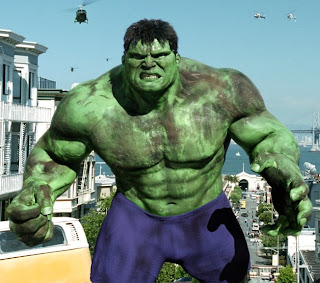 And who thought covering Hulk in fecal matter would be a good idea?

Ultimately, the writers would have been better off not changing the Hulk’s origin at all, because the version they came up with just plain didn’t work, nor did it make any sense, undermining the movie’s braver efforts in regards to its psychological focus.

This might be a controversial statement, but I wasn’t particularly impressed on the acting-front either. I have looked up some contemporary reviews such as this one in preparation for this review, and they seemed to like Eric Bana, Jennifer Connelly and Nick Nolte’s performances. For my own part, I thought that Eric Bana and Jennifer Connelly were unconvincing to say the least. As for Nick Nolte, he made David Banner batshit insane, although I’m not so sure that this was acting on his part or just him being himself. In all, I don’t think any of the leads were particularly awful (Josh Lucas doesn’t count as a lead), but they didn’t deserve the praise that some people heap on them either.

Finally, the special effects are one glaring noteworthy mention. At the time they weren’t exactly top-notch, and they look downright cartoonish now. You already saw the video with the dogs earlier, and they just look like cartoon characters. Check out the picture of Hulk covered in shit above, and focus on the pants. They don’t even look real, they look like someone photoshopped them on. And check out Hulk’s proportions here: 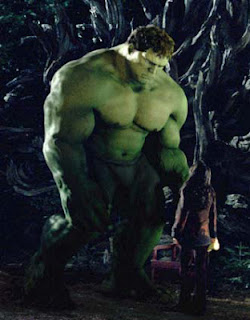 His proportions are all wrong. He doesn’t even look like a real being. And I can blame this one on Ang Lee himself, because he is directly responsible. The “overlay” effects were awful as well (as you can see most egregiously in the video of Talbot’s death).

Geez, I’ve really been ravaging this one. You might ask if there’s anything I enjoyed about Hulk, and to that I say that there were a few things. Honestly, when Hulk actually does start smashing things it’s pretty enjoyable. I also thought that the split-screen shots were pretty cool as well, and the film is shot with the eye of a true artist – I can give Ang Lee that (although he puts that eye to much better use in Life of Pi). I also quite enjoyed the Stan Lee and Lou Ferrigno cameo, it made me chuckle and wasn’t too blatant. Finally, I appreciate Hulk for what it is – a risky experiment with the superhero genre which was honestly trying to elevate it. However, unlike some reviewers I do not consider this grounds for absolution, for if I could then Birdemic would fall under the same criteria. I think my younger self was a tad harsh on the film when it came out due to not appreciating its efforts, but I wasn’t totally wrong in my assessment. Hulk is a colossal failure, as both a disappointment for the people who went in expecting a smash ’em up, and just for people who love good movies in general.